Last year I wrote about the dangers of the high-yield CEF (XFLT) in “XFLT: Don’t Be Deceived By The Dividends“. While the article was not well-appreciated by many commenters, the thesis turned out as expected. Since the article was written, the fund has declined 33% in value (26% including dividends) and declined over 50% during the worst of the March crash. I did say last September “I would not be surprised if the CEF loses half of its value over the next year.”

The bearish thesis was relatively simple. XFLT has significant exposure to CLO equities and uses leverage. While CLO equity pays higher yields, they are at the bottom of the CLO capital structure and thus have minimal recourse in the event of the default of even a small percentage of borrowers. Put simply, CLO equities can very easily lose the majority of their value in the event of a recession or liquidity crisis such as today. These high-risk assets currently compromise 39% of XLFT’s portfolio.

To make matters worse, many of XFLT’s holdings have lower credit quality with many non-rated CLO assets and below investment grade senior loans. Additionally, XFLT has a high 2.5% expense ratio as well as a 1.5% interest on borrowed funds and 1.6% in “other” expenses giving it a total annual expense ratio of 5.65%. While these expenses may be properly used by managers, they take much of its would-be dividend income and have been a major factor in the funds consistently poor performance. This is shown below compared to the high-yield bond ETF (JNK) and senior loan ETF (BKLN) using total returns (which include dividends):

While many investors and analysts like the fund for its current 12% dividend yield, those high yields have never managed to offset its declines in principal value. This is true even during comparatively strong economic times from 2018-2020 when the fund failed to generate positive lasting returns

Now, as I explained in last year’s article, the CEF could be a buying opportunity after it declines in value by at least 50%. The reason is that CLO equity assets are highly sensitive to changes in economic conditions. A lasting improvement in liquidity and economic conditions can cause these assets to rise by double digits from their trough. Due to its expense ratio, I do not believe XFLT is a suitable long-term buy and hold, but it can be a stellar quick rebound opportunity.

XFLT has rallied a bit since its March low. However, this does not necessarily mean investors missed the boat. As I’ll explain, I believe it is quite possible XFLT is headed for a second wave lower.

An Updated Look at XFLT’s Portfolio

XFLT’s portfolio has changed a bit slightly since I covered it last. The company last reported its holdings on June 30th. I put its roughly 170 holdings into a spreadsheet to see its risk exposure more clearly using S&P credit ratings. As you can see below, the largest portion of its assets are non-rated and likely have high risk considering the non-rated loans have a weighted-average coupon of 14%: 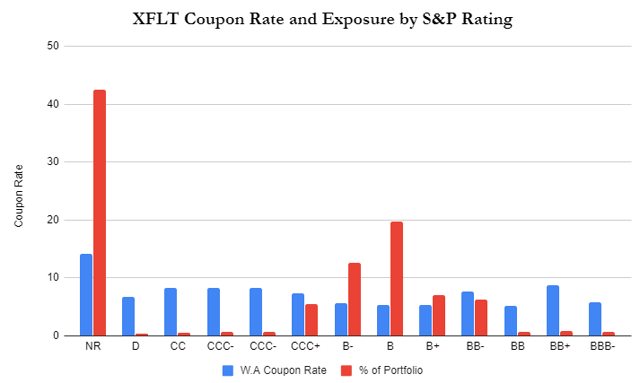 The vast majority of these non-rated assets are CLO equities. Most of the fund’s other assets pay similar yields around 5-10%, but as you can see below, its CLO equities pay upwards of 15%: 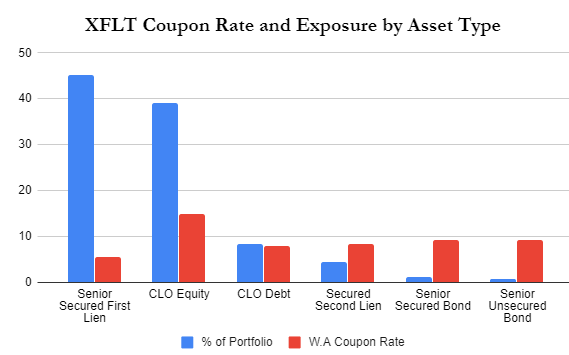 Overall, XFLT’s exposure is similar to how it was last year. About half of its assets are in moderate risk loans that likely have a similar risk level as a senior loan ETF like (BKLN). The other portion of XLFT’s assets is in much riskier high-yield CLO equities.

The only major difference is that it is getting slightly higher yields on loans than it was then which is a positive factor. Not all CLOs are the same. While the higher tranches of CLOs are generally safe in recessions, CLO equity tranches can very easily lose 100% of their value. Of course, if they lose 90% of their value and then make a full recovery, the ‘rebound returns’ can be enormous.

Will XLFT Continue to Rebound?

While XFLT remains a high-risk high-reward investment, it is a better investment today than it was last year due to its depressed price. Still, the fact remains that we are in a recession. Additionally, it seems likely that it will be quite sometime before the economy makes a full recovery.

XFLT is driven by liquidity more than anything. An illiquid financial environment can easily create a vicious spiral that brings CLO equities (and most high-yield assets) to their knees. While the Federal Reserve has supported markets in this regard, below investment grade assets have largely been left out of the Fed’s Q.E program.

Additionally, other stimulus programs such as PPP and added unemployment benefits are now over. It is my view that these programs have been the primary source of liquidity in the riskier areas of financial markets. As this ends, we will see a decline in spending that will likely match the recent increases to unemployment. It is possible Congress passes another stimulus bill, but it will almost certainly be smaller than the last. See “Ending Stimulus To End The Rally” for more information.

While this has occurred, XFLT and most other risk assets have hit a standstill over the past two months. In my opinion, this is a signal that the market is hitting a second peak, particularly in risk-sensitive areas.

I would not short XFLT due to its high 14% borrowing fee, but I would most certainly avoid it for the time being. As I mentioned earlier, it has strong rebound potential, but I do not believe the current rebound has legs to move higher. The fact is that XFLT holds very high-risk holdings that carry arguably greater downside risk than is reasonable given its dividend yield. Additionally, its extremely high expense ratio makes it a poor long-term buy and hold investment. Still, if the fund falls below $4 it may be a solid short-term turnaround investment.

Now, I’m sure many income investors will not take kindly to this view. It is understandably difficult to pass on a double-digit dividend yield opportunity. That said, it is worth pointing out that XFLT has not generated positive returns due to its expense ratio more than anything else. Additionally, given the risks in its CLO equity book, it is quite possible that it sees 30-50% in a downside from here given another wave lower in broader markets. Even with a 12% yield, I do not believe that is a bet worth taking.

If you’re looking for (much) more research, I run the Core-Satellite Dossier here on Seeking Alpha. The marketplace service provides an array of in-depth portfolios as well as weekly commodity and economic research reports. Additionally, we provide actionable investment and trade ideas designed to give you an edge on the crowd.