If something is true, no amount of wishful thinking will change it. Richard Dawkins

US Gross Domestic Product (GDP) decreased 7% in the second quarter of 2020, the largest quarterly decrease since World War II. Reports sensationalize this 7% loss by annualizing it to 32%. Also, in the quarter unemployment averaged 14%, the highest since the 25% unemployment rate in the Great Depression. Yet the US stock market returned 21% in the quarter. The pandemic is getting worse and the stock market is in denial, completely disregarding bad economic news.

Fed intervention is part of the reason for the disconnect. The Fed dropped $3 trillion in helicopter money into the economy in the quarter. Much of this stimulus ended up in the stock market, but most importantly investors were comforted by the Fed’s actions – the Fed is our friend.

It’s human nature to avoid pain as long as possible. Quantitative easing (QE) in response to the Great Recession of 2008 accomplished this deferral, so far. The Fed had begun to reverse QE when the pandemic struck, so the reversal had to be set aside. Now the Fed has intensified intervention to delay the effects of COVID, leading to an extraordinary Fed balance sheet of $7 trillion and growing. $7 trillion is about one-third of GDP. It’s been a double whammy, leading to concerns about a limit on printing money. How much money can the Treasury print? Are we testing the limit?

In the following we discuss the impact of this intervention on stock prices. The effect on bonds is obvious: interest rates are near zero, possibly heading to negative territory. The pain cannot be indefinitely delayed with money. The bigger the rise, the bigger the fall.

As shown in the following graph, the Federal Reserve balance sheet increased from $700 billion in 2008 to $4.5 trillion in 2015, increasing by $3.8 trillion as a result of quantitative easing (QE).

Starting in 2015 the Fed gradually unwound QE so that by 2020 the balance sheet had shrunk to $3.8 trillion, a $700-billion decrease. But then COVID-19 struck, and the Fed responded with $3.2 trillion in relief, bringing its balance sheet to a whopping $7 trillion, which is about one-third of GDP.

Most of the QE money went into the hands of people who invested it in the stock market, especially share buybacks. As shown in the following graph, corporations have used profits to pay dividends and buy back stock. 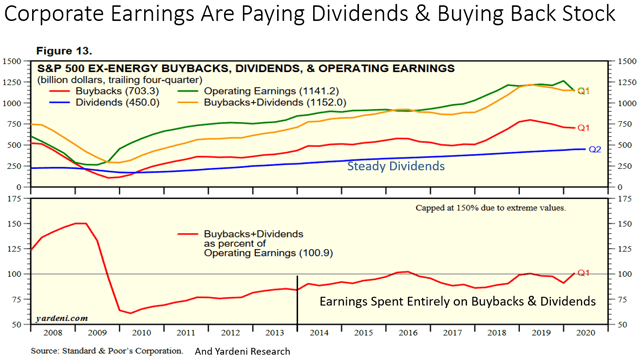 Corporations have seized the “sure deal” of selling low interest rate bonds to buy back their own shares.

Consequently, the stock market has soared alongside QE as shown in the exhibit above, but this growth is principally from inflation, with newly minted money chasing stocks. Current stock prices suffer from money illusion, as do bond prices.

While all focus is on the pandemic, it is not the only threat to the economy and the stock market. There are at least 10 other threats any one of which could single-handedly crash the stock market. We’ve had a double whammy with the 2008 recession followed by the pandemic. Imagine what might happen if another disaster piled on. It’s likely that one or more of these threats will occur in this decade, while our 78 million baby boomers are transitioning through the Risk Zone, moving into retirement.

But even without another disaster, there is a price to be paid for all this money printing. In the next sections we describe how money printing works and how it’s paid for.

Contrary to popular belief, the Treasury Department doesn’t print money. The Bureau of Engraving does the printing if paper money is required. But most of the new money is not printed at all. Instead, the Treasury Department sells bonds. In the current world economic situation, the only entity who will buy these bonds is the Federal Reserve. As shown in the following graph, the Federal Reserve has purchased all of the new COVID relief money.

The mechanics of the way money is “printed” are summarized in the next picture: 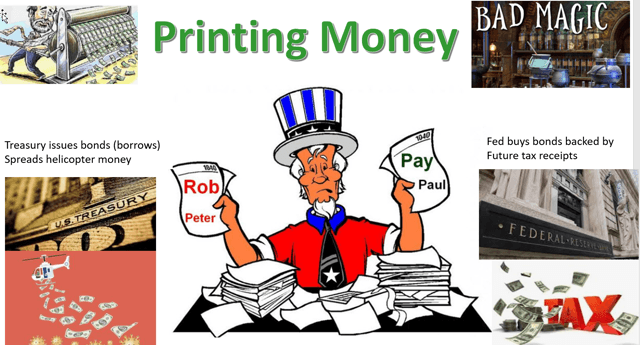 Some say that “money is created out of thin air.”

I expect to receive lots of flack on this section from readers who say I don’t understand Modern Monetary Theory (MMT). Please explain where I’m wrong.

My understanding of MMT is that the government should inject all the money it takes to solve problems, and the government should take that money back when the problem is solved. New money is taken back out of the economy with taxes. This theory works if there is a will to increase taxes and/or it’s acceptable to tax future generations ad infinitum. In other words, the new money should not be permanent.

Since we can’t go back to the days before multi-$trillion interventions, we need to be prepared for the future consequences, which will be ugly and awesome. There is no free lunch. Putting off pain today has consequences for tomorrow.

The stock market cannot be wished or manipulated away from the realities of the economy forever. The truth always wins. So the action step for readers of this article is to protect yourselves. 401(k) retirement plans should protect their naïve defaulted beneficiaries with safe target date funds.

The stock market will correct. Inflation will rise, maybe even soar. Money illusion is, well, just an illusion.

Additional disclosure: I am sub-advisor of the SMART Target Date Fund Index