Earnings of Pinnacle Financial Partners, Inc. (NASDAQ: PNFP) increased to $0.83 per share in the second quarter from $0.37 per share in the first quarter of 2020. A decline in provision expense and an increase in loans were the major contributors to the earnings improvement. The net income will likely continue to recover in the year ahead due to fees from the Paycheck Protection Program, or PPP. Moreover, the provision expense will likely continue to decline in the year ahead because the economic forecasts incorporated in the second quarter’s loan loss reserves appear reasonably stressed. Consequently, I’m expecting PNFP’s earnings to almost double in the second half compared to the first half of 2020 but decline on a year-over-year basis. For the full year, I’m expecting PNFP to report earnings of $3.70 per share, down 29% from last year. PNFP is facing substantial credit risks because of its high exposure to COVID-19-sensitive industries. The risks will likely keep the stock price subdued despite the high upside from the current market price; therefore, I’m adopting a Neutral rating on PNFP.

Excluding the impact of PPP, PNFP’s net interest income will likely decline in the year ahead due to a fall in net interest margin, or NIM. The company’s NIM declined by 17bps in the second quarter following the 150bps Federal Funds rate cut in March. PNFP has more floating-rate based loans than fixed-rate loans; therefore, the NIM has most probably already taken the bulk of the hit from the interest rate cut. As mentioned in the presentation, floating-rate and short-term rate based loans made up 57.5% of total loans at the end of the last quarter. Furthermore, the management mentioned in the earnings release that they anticipated reducing liquidity over the next two to three quarters as the economy improved, which will help NIM. Moreover, PNFP has negotiated new floors in the second quarter that will help protect from a further decline in interest rates or negative interest rates. As mentioned in the presentation, the loan floor penetration rate is now 61% for funded loans and 85% for unfunded loans. Considering these factors, I’m expecting the NIM decline to slow down to just 6bps in the third quarter compared to 17bps in the second quarter. The following table shows my estimates for yield, cost, and NIM.

PNFP’s loans surged by 10% in the second quarter due to PPP loans. As most of the loans under PPP will likely get forgiven before year-end, the loan balance will likely decline in the year ahead. Excluding the impact of PPP, loans are likely to grow in the remainder of the year because PPP has provided PNFP the opportunity to gain market share. Overall, I’m expecting PNFP to end the year with loans of $20.7 billion, down 7% from the end of June but up 5% from the end of last year. The following table shows my estimates for loans and other balance sheet items. 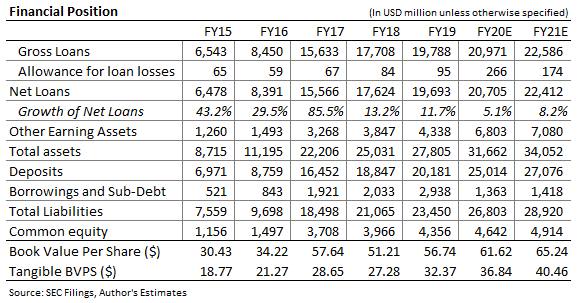 Considering the impact of PPP, and the expected changes in NIM and loans, I’m expecting the net interest income to be 10% higher in the second half compared to the first half of 2020. 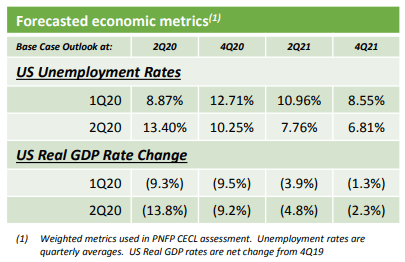 As the forecasts appear reasonable under the current environment, I’m expecting the contribution of economic factors to future provision expense will likely remain subdued. On the other hand, portfolio changes and the worsening of the credit quality of existing portfolios will likely drive provision expense. PNFP has high exposure to COVID-19-sensitive industries, including hotels, retail, and restaurants, which made up 22% of total loans at the end of the last quarter, as mentioned in the presentation. Moreover, according to details given in the earnings release, PNFP has deferred payments on 20% of total loans. The high proportion of loan deferrals shows that PNFP is facing substantial credit risk.

Fees from PPP and lower provision expense will likely help earnings recover in the remainder of the year. Moreover, management expects income from Bankers’ Healthcare Group to remain elevated in the third quarter at the second quarter’s level, as mentioned in the presentation. Consequently, I’m expecting earnings to more than double in the second half of the year compared to the first half. For the full year, I’m expecting PNFP to report earnings of $3.70 per share, down 29% from last year. The following table shows my income statement estimates. 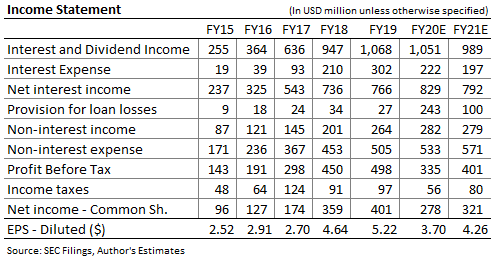 PNFP Offering a High Upside and an Unattractive Dividend Yield

I’m using the average price-to-book multiple, or P/B, for the first half of 2020 to value PNFP. In my previous report, I took the average of P/B multiples since 2017 to determine the justified multiple for the target price. However, the company’s profitability is unlikely to return to pre-pandemic levels in the next couple of years; therefore, I believe it’s appropriate to take the average for the first half of 2020 only. The following tables show the actual and expected return on equity and the actual P/B multiples.

Multiplying the June 2021 forecast book value per share with the average P/B multiple gives a target price of $50.1 for the middle of next year. This target price implies an upside of 23% from PNFP’s August 5 closing price. The following table shows the sensitivity of the target price to the P/B multiple:

PNFP also offers a low dividend yield of 1.6%, assuming the company maintains its quarterly dividend at the current level of $0.16 per share. There is very little threat of a dividend cut because the earnings and dividend estimates suggest a payout ratio of just 17%. Additionally, management mentioned in the conference call that they currently did not intend to cut dividends.

PNFP is currently facing a high level of credit risk because around 22% of the company’s total loans are to COVID-19-sensitive industries. Moreover, PNFP has deferred payments on around $4.4 billion worth of loans, representing 20% of total loans. Due to the risks, there is a chance that provision expense will exceed its estimate, leading to a negative earnings surprise. The high level of credit risk will likely keep the stock price subdued in the near term regardless of the attractive valuation; hence, I’m adopting a Neutral rating on PNFP.

Additional disclosure: Disclaimer: This article is not financial advice. Investors are expected to consider their investment objectives and constraints before investing in the stock(s) mentioned in the article.