Noble Corporation (NYSE:NE) has been covered by me previously, so investors should view this as an update to my earlier articles on the company.

As predicted in my last article, leading offshore driller Noble Corporation (“Noble”) has filed for bankruptcy protection ahead of an August 1 note maturity.

The key terms of the restructuring support agreement look as follows:

According to court documents (docket 28), the company entered bankruptcy with $306 million in unrestricted cash. After accounting for the proposed $200 million new second lien notes offering, the $545 million credit facility repayment and assuming a $245 million initial draw under the new $675 million exit facility, Noble’s pro forma cash on hand upon emergence calculates to $206 million while total liquidity would amount to $636 million.

In a debtholder slide presentation filed with the SEC, the company projects $85 million of negative unlevered free cash flow next year with the metric improving to positive $20 million in 2022 and $143 million in 2023: 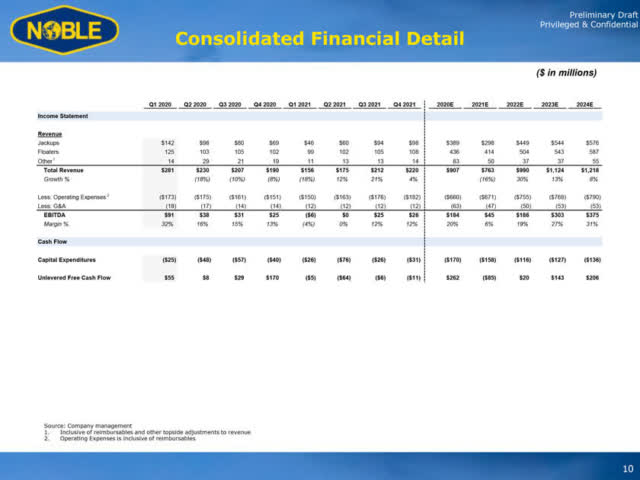 Unfortunately, the restructured company will be levered with close to $450 million in new debt at an average interest rate of approximately 7.75%, resulting in roughly $34.5 million of annual cash interest payments.

Moreover, the credit facility is subject to a number of financial covenants which require the company to achieve certain minimum EBITDA levels as well as complying with minimum cash interest and asset coverage ratios:

Particularly the terms of the minimum asset coverage covenant are interesting as there won’t be any value assigned to rigs that have been idle for at least 12 months.

According to management’s projections, the restructured company’s available liquidity would be more than sufficient to manage through an anticipated 2021 cash flow trough but this would require dayrates and utilization to recover quite meaningfully going forward: 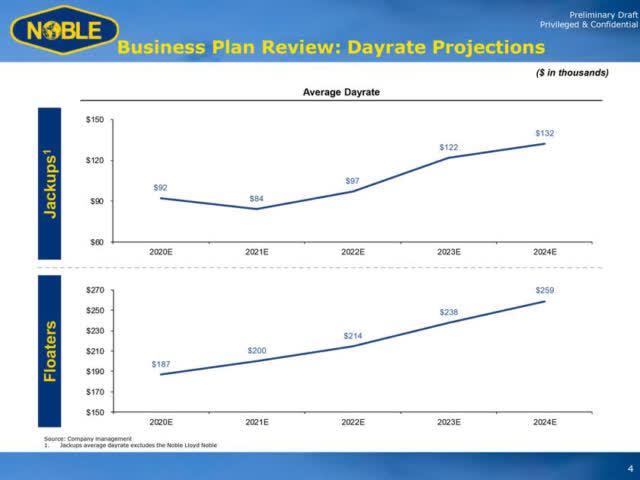 Particularly the company’s assumption for active fleet utilization to return to almost 100% already in 2022 looks aggressive. On the flipside, Noble apparently does not plan for reactivating any of its currently cold-stacked floaters until at least 2025 but after more than half a decade in cold-stack, costs for reviving the rigs would be prohibitive. Given this issue, I would expect the company’s cold-stacked floater fleet to be scrapped entirely over the next couple of quarters. 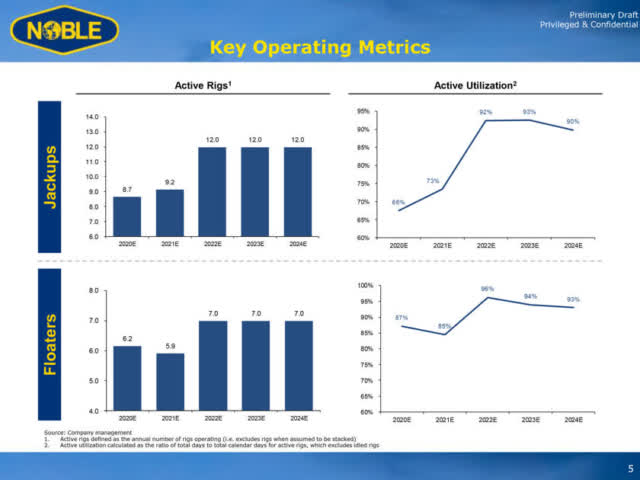 Noble Corporation will restructure approximately $4 billion in debt obligations in bankruptcy and emerge with less than $450 million in new debt and pro forma liquidity of $636 million. Holders of the company’s priority guaranteed notes will own the lion’s share in the restructured company while current equityholders will at best receive a small amount of out-of-the-money warrants.

The stock will likely commence trading on the OTC on Monday under a new ticker symbol.

Given the issues discussed above, investors should exit existing positions and move on.