Much like in May, the beginning of August typically sees increased noise with regard to seasonal trends at a time in the year that markets tend to be somewhat quieter. That said, this report looks at the seasonal patterns across major G10 FX pairs.

A striking observation in the August seasonal trends is the tendency for NZD/USD to underperform, which has fallen 9 times in the last 11 years. On average, the pair has dropped 1.8% since 2009, while in the past 5 years the performance has been even worse at -2.58%. In contrast, investors tend to demand safe-havens over cyclical currencies with both the Japanese Yen and Swiss Franc outperforming its counterparts on average since 2009. In turn, this highlights that in a typically more volatile month for risk sentiment, investors tend to be positioned more defensively.

NZD/JPY at Risk From RBNZ

That said, on the seasonal front NZD/JPY appears most vulnerable to the downside. Alongside this, with risks of the RBNZ looking to ease monetary policy further and potentially looking to curb the recent strength in the New Zealand Dollar, this raises the likelihood that NZD/JPY can follow its seasonal pattern.

Elsewhere, GBP/USD does not tend to fare well in August with the pair falling 4 times in the last 5 years (-1% on average in the last 5 years). As such, in light of the rally in to 1.31-1.32 in July, the Pound is at risk of a corrective move lower, particularly as CFTC positioning data is yet to show belief in the rally, given that speculators have continued to get more bearish as the Pound has risen. 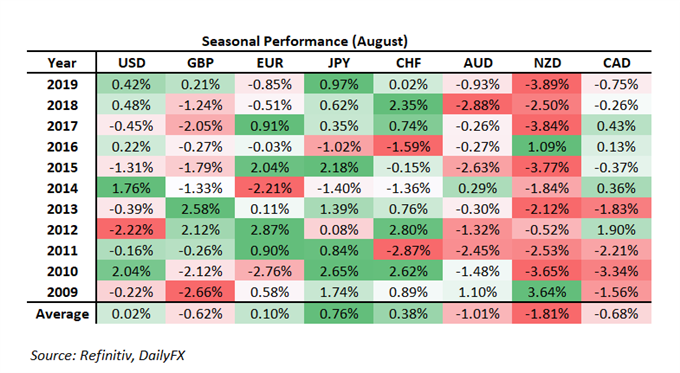 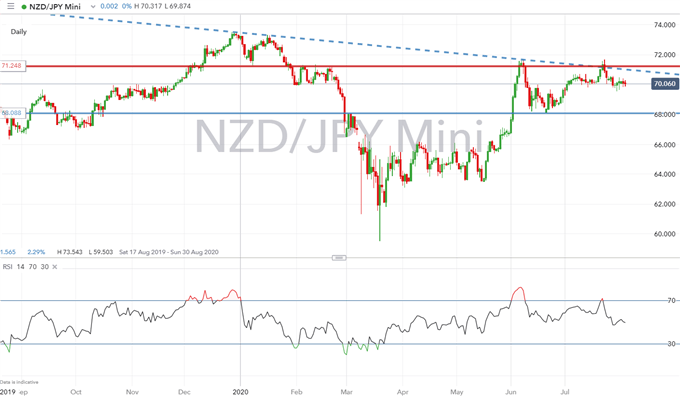