The rebound to over the $2 level was no surprise. As we are now in August, it is only three months before the energy commodity will enter the peak season for demand when stockpiles fall. The price of natural gas tends to peak between November and January each year as it is the time of the year when heating demand is at its highest level. I am not surprised by the rally; I had expected a recovery as the cure for low prices in commodities is always a low price. Warren Buffett gave the market a bit of a boost as he made a $10 billion investment in the energy commodity’s future.

I do not expect a runaway bull market in natural gas anytime soon. I would be shocked if the price rose above the November 2019 high of $2.905 per MMBtu. However, I have learned from thirty years of trading in the natural gas market that I will never be disappointed if I expect the unexpected.

I will be trading natural gas over the coming weeks and months using the ProShares Ultra Bloomberg Natural Gas product (BOIL) and its bearish counterpart (KOLD). At over $2 per MMBtu, the odds are starting to favor another downside correction, as speculative shorts are likely to flock back to the market with a vengeance.

A rally exceeds my expectations

Natural gas is a highly volatile energy commodity, so it is no surprise that it surpassed my upside price projection and rose above its technical resistance level on the weekly chart at the early May high of $2.162 per MMBtu.

The weekly chart highlights the correction that caused price momentum and relative strength metrics to rise and head towards overbought conditions. Wider trading ranges lifted weekly historical volatility to nearby 70% on August 6. However, the total number of open long and short positions edged lower from over 1.3 million contracts on August 2 to the 1.285 million contract level on August 5. Those holding speculative short positions likely existed risk positions as the price took off on the upside.

The daily chart shows that the next target on the upside is at the May 5 high on September futures at $2.499 per MMBtu. However, the price ran out of upside steam on Thursday after the EIA reported its latest inventory data. After trading to a peak of $2.284, September natural gas backed off to a low of $2.136 and settled at $2.165m a lot closer to the low than the session’s high.

Another small inventory injection as of July 31

Last week, the Energy Information Administration reported a marginal 26 billion cubic feet injection into storage across the United States, the fifth consecutive decline. This week, the increase was slightly higher, at 33 bcf. 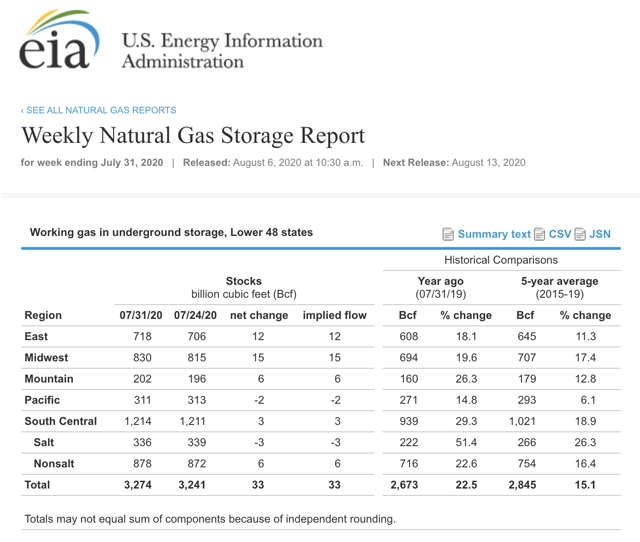 As the chart illustrates, the injection as of the week ending on July 31 took total stockpiles to 3.274 trillion cubic feet. The amount of natural gas in storage was 22.5% above last year’s level and 15.1% over the five-year average for the end of July. The data marked the nineteen straight weeks, where the percentage above last year’s level declined.

The inventory data was not all that bearish for the energy commodity, but the price dropped in the report’s aftermath. The decline was a sign that the market may have run out of buying.

After selling his airline positions at the start of the risk-off period on the back of the global pandemic, Mr. Buffett’s first significant foray into the market likely provides some psychological support for the natural gas market. While the investment may have played a role in igniting the price and pushing it through $2 per MMBtu, the move was overdue. Meanwhile, the price recovery to the highest level of 2020 on the continuous futures contract means that the natural gas assets are likely worth more than Warren Buffett paid. However, he would not have made the purchase as a speculation on the price of the energy commodity. He probably paid far below market value for the assets. The higher price for natural gas only enhances the value of the purchase.

The 2020/2021 withdrawal season and time of the year when demand for the energy commodity peaks will begin in November. The September futures contract already reflects the projected price action at the start of the fall season. There are approximately fifteen weeks to go until the beginning of the withdrawal season. Stocks were already at a very high level as of the end of July.

In November 2019, stockpiles of natural gas in storage in the United States peaked at 3.732 trillion cubic feet. The high level of inventories weighed on the price of the energy commodity. Natural gas only made it to a high of $2.905 per MMBtu in November 2019, which was the most recent peak. At 3.274 tcf with fifteen weeks left in the injection season, an average injection of only 30.6 bcf would push the total above last year’s level.

Natural gas inventories only rose to over the four trillion cubic feet level twice since the EIA began reporting stockpile data. An average injection of 48.4 bcf for the rest of the injection season would send the stocks above the four tcf level for the third time.

The inventory levels going into the winter of 2020/2021 is not bullish for the price of natural gas.

Now that the energy commodity has recovered to over $2 per MMBtu, speculative shorts are likely to return to the market as it runs out of upside steam. Short sellers have had plenty of success selling at over $2 and could become aggressive during August. I expect the price to drop below $2 and to a higher low on the September futures contract. Short-term technical support stands at the July 20 higher low at $1.646 per MMBtu, which leaves plenty of room for another push to the downside.

The fund summary and top holdings of BOIL’s bearish counterpart (KOLD) include: 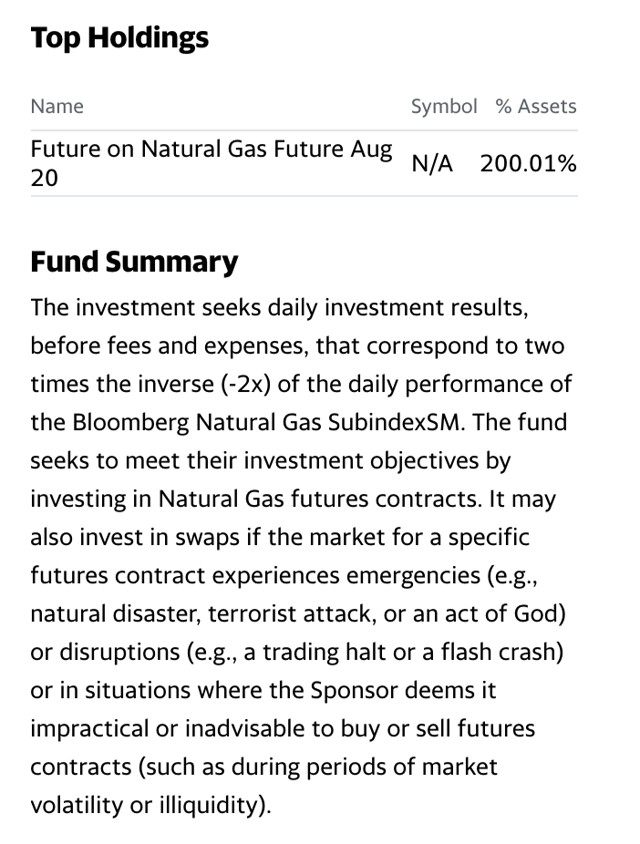