Two of the drivers for the memory market in 1H 2020 have been servers and PCs:

This article presents an analysis of Micron Technology’s (NASDAQ:MU) DRAM and NAND market based on guidance from these companies. Equally important, an analysis and some guidance from CPU manufacturers Intel (INTC) and AMD (AMD) and GPU manufacturer Nvidia (NVDA) corroborate strong growth for PC and server memory chips through 2020.

“Q2 PC-centric revenue was $9.5 billion, up 7% year-on-year on strong notebook PC sales, enabled through increase manufacturing supply on capacity additions over the past year.

Data Center Group revenue of $7.1 billion was up 43% from the prior year, coming in higher than expectations with strength across our customer segments.”

Moving to full year, we expect our PC-centric business to be flat to slightly down against the PC TAM that is down mid-single-digits year-over-year. Following a very strong first half of the year, we expect demand trends to moderate in the second half as weaker global GDP

We expect revenue from our data-centric businesses to be up approximately 10% for the full year on strong cloud demand and increased 5G buildouts. After significant cloud expansion in the first half and into Q3, we expect capacity expansion to moderate as CSPs move to a digestion phase.”

Chart 1 show revenues for Intel’s two segments for their past six quarters and forecast for two quarters based on guidance given during the company’s recent earnings call. I estimate revenues in both segments will drop sequentially in Q3, but the DCG segment will level off QoQ in Q4 while the CCG segment will see a strong QoQ drop.

I address AMD’s guidance below, and suggest that Intel’s negative guidance for CCG is tied more to market share loss to AMD in the PC CPU business than to headwinds in the PC and server markets.

Chart 2 shows AMD revenues for its two segments for the past five years, and can be compared to those of Intel in Chart 1.

Keep in mind that although revenues for the segment grew 62% QoQ, I estimate Server revenues of $395 million increased 18% QoQ and 160% YoY, significantly better than that of Intel of 1.8% QoQ and 43% YoY. 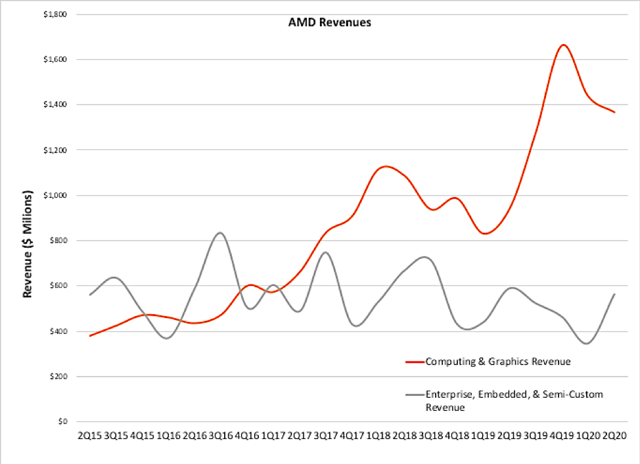 “The demand is fantastic. It is the best ramp we’ve ever had. The demand is the strongest we’ve ever had in data centers. And we’re starting to ramp of a multiyear ramp. And so — those are some of the differences. I think the conditions are very different.”

Announced last week, the A100 is the first Ampere architecture GPU. Although just announced, A100 is in full production, contributed meaningfully to Q1 revenue and demand is strong.

Unlike Chart 1 that presents Intel’s drop in data center in Q3 and a recovery in Q4 2020, Nvidia’s datacenter should see sustained albeit slower growth over the next three quarters based on its new Ampere and because of Mellanox. 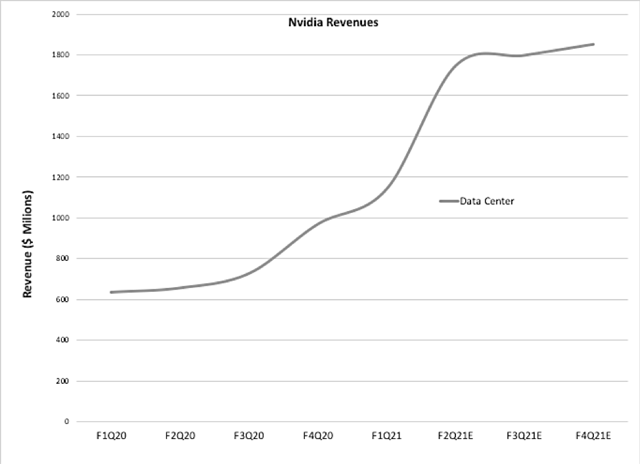 My focus on the CPU business for Intel and AMD was on servers and PCs, since these were the two drivers of memory chips in 1H 2020, brought about by the work/study stay at home orders that resulted in increased PC purchases and server demand as individuals connected to their school/office servers, as well as remote conferencing over Zoom or Skye.

Nvidia’s GPU chip business for the datacenter is tied also to work/study stay at home, and they too function in tandem with memory chips.

With an analysis of Intel and AMD for their products as a backdrop, which not only use logic chips from Intel and AMD but also memory chips, this article will address various financial data for Micron Technology for a 5-year period on a quarterly basis including forecasts for the next two quarters. 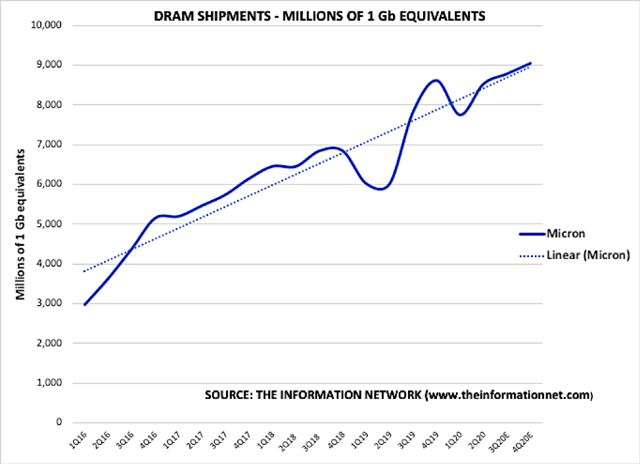 According to the company, Micron’s 1y and 1z nodes together now make up more than 50% of its bit production. Micron continues to make progress on its 1a node and I expect to introduce in fiscal 2021.

Bit shipments have grown strongly since Q3 2019, pre-COVID-19, and dropped in Q1 2020 as a result of COVID-19 lockdowns. But the shipments increased as a result of stay-at-home stipulations, demanding more memory for cloud and enterprise servers to meet the needs of individuals accessing their company or school servers.

Smartphones using mobile DRAM have had a flat 1H 2020, but growth should increase in 2H 2020 as 5G becomes more widespread, particularly with Apple (AAPL).

Next-generation game consoles are expected to increase graphics DRAM demand in 2H2020, since these consoles have 40% higher content, up to 16GB, than the current generation of consoles.

Chart 5 shows DRAM ASPs. The peak in ASPs that occurred in 3Q 2018 corresponds to a minor peak in bit shipments (Chart 4) but a dramatic drop in shipments corresponding to the drop in ASPs.

However, this drop in bit shipment lasted about 2 quarters whereas the drop in ASPs in Chart 5 lasted for 5 quarters before a tick up in 1Q 2020.

ASP growth will continue to be a bumpy one, as suppliers continue to pump out bit shipments as they move to more advanced nodes (1y nm to 1z nm to 1a nm) in order to compete amongst each other on a technology basis. As dimensions get smaller, more chips are made on a wafer. 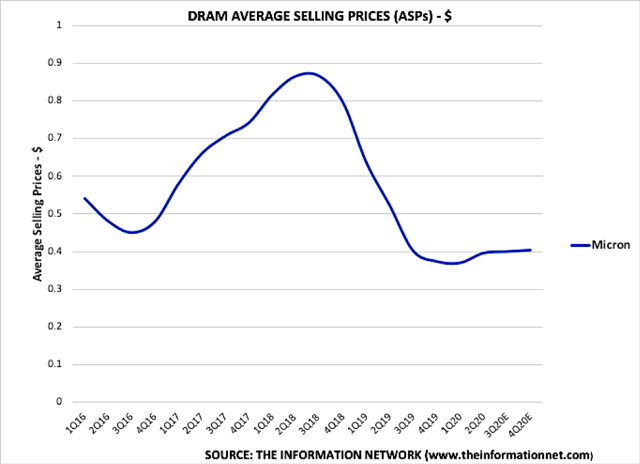 Chart 6 shows that DRAM revenues have a direct relationship to ASPs in Chart 5, as one would expect. Closer examination between ASPs and revenues shows that ASPs have a near Gaussian distribution (similar ramp up and down) while revenues are non-Gaussian and skewed by the linear growth in bit shipments shown in Chart 4 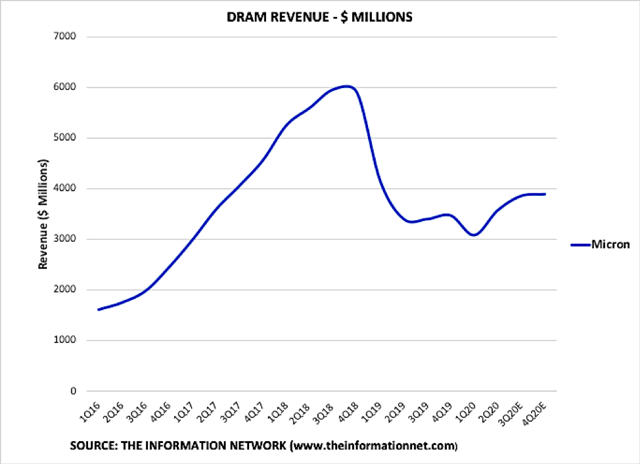 NAND bit shipments growth is significantly different from DRAMs. Micron hosted a grand opening ceremony of its Fab 10 Expansion in Singapore in August 2019, and we are seeing Micron continuing to adopt more advanced 3D NAND process technologies with a higher number of layers and bit density. 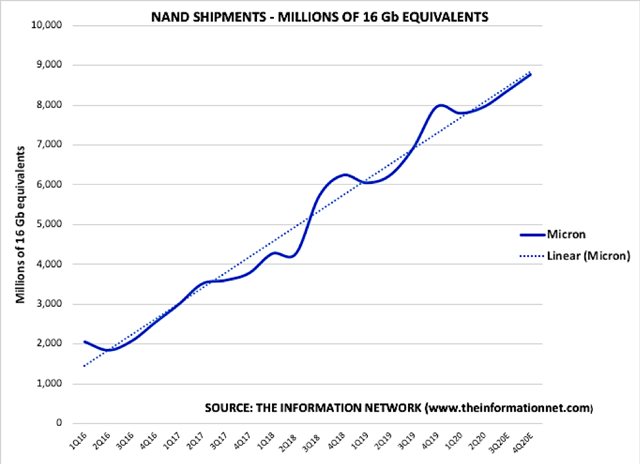 As with DRAM, ASP changes were comparable for NAND. But unlike DRAMs, there is no corresponding peak in NAND bit shipments.

Also, NAND revenues started recovering two to three quarters later than the peak and continued increasing, despite COVID-19. DRAM revenues, on the other hand, have not grown much since the peak (Chart 6). 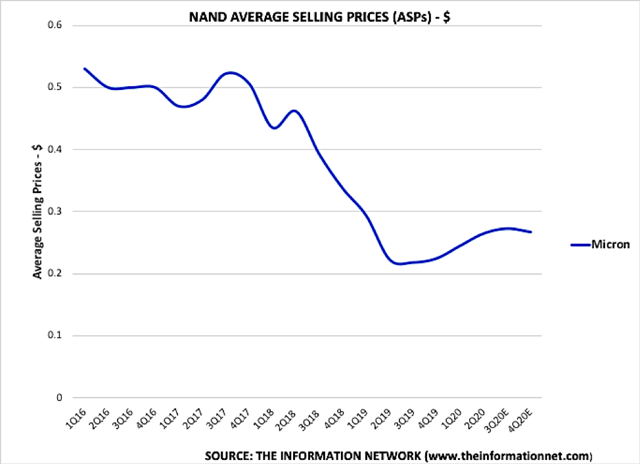 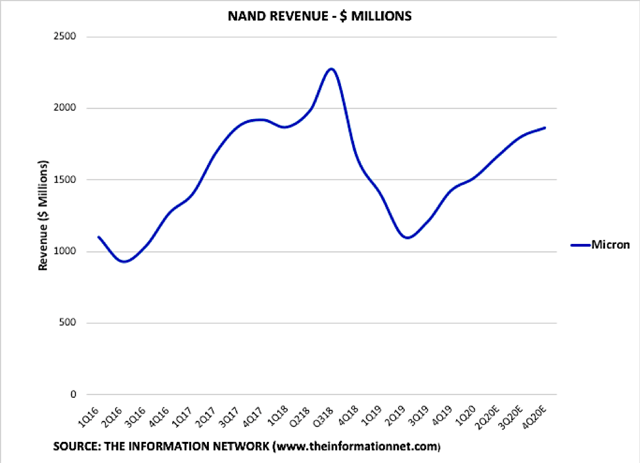 There are major drivers of DRAM and NAND market in 2020:

Items 1 and 2 increased in 1H 2020, catalyzed by the work/stay at home policies due to COVID-19. Item 3, smartphone shipments, have been flat to down in 1H 2020 but the increased utilization of 5G is expected to propel shipments in 2H 2020, according to our report entitled “Hot ICs: A Market Analysis of Artificial Intelligence, 5G, CMOS Image Sensors, and Memory Chips.”

​With recessionary fears brought about by COVID-19, the question is whether 2H 2020 will stall the gains for DRAM and NAND. I used guidance from the three memory suppliers to forecast the financial data over the next two quarters.

In addition, I attempted to utilize guidance provided by Intel and AMD for their PC and server products to see if it corroborated guidance from Micron. Here we saw differences in guidance from the CPU companies, but the more optimistic guidance coming from AMD could be reflected in the company’s increasing market share against Intel.

This is helpful in forecasting future quarters because a QoQ change in just one financial datapoint can provide a high degree of certainty in forecasting other datapoints or competitor if one is a number cruncher and so chooses.

DRAM revenue growth, despite flattish ASP growth, will be in the double digits YoY in 2020 for Micron, growing 12.1% YoY in 2020. NAND growth for MU will be greater at 21.0% YoY according to the analysis in this article.

This free article presents my analysis of this semiconductor sector. A more detailed analysis is available on my Marketplace newsletter site Semiconductor Deep Dive. You can learn more about it here and start a risk-free 2-week trial now.