The ADP Employment Report was disappointing. The headline number was an addition of 167,000: 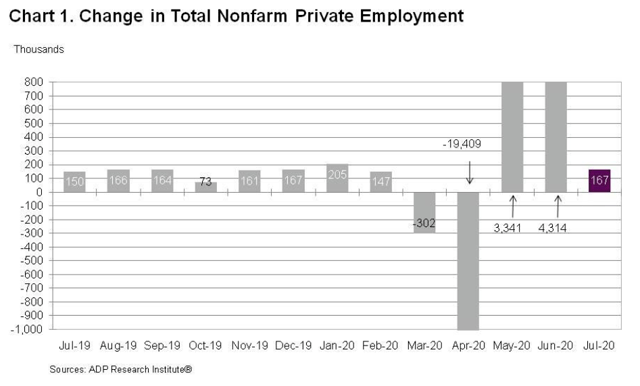 According to ADP data, the economy lost 19,711,000 jobs in March and April. The economy added 7,655,000 jobs in May and June, accounting for 39% of the jobs lost. 167,000 per month isn’t anywhere near enough to make any meaningful headway into the unemployment rate.

And, the companies that are adding jobs is very concerning: 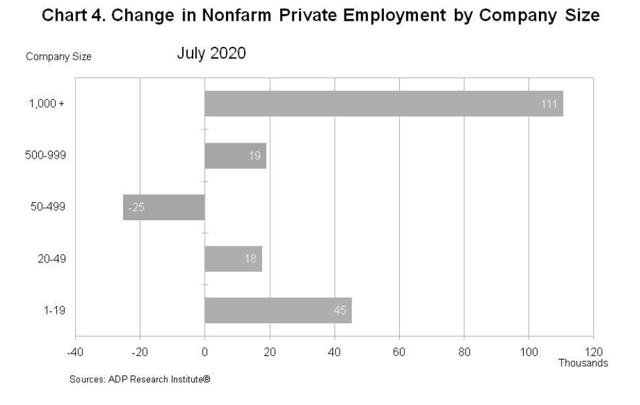 Large companies are responsible for the bulk of the hires. That means small business is still reeling from the lockdowns.

The US service sector is rebounding strongly. The ISM Service Index was 57.1. There was a strong increase in new orders and production: the former increased 19.7 points to 61.6; the latter advanced 25 points to 66. While the anecdotal comments in the manufacturing report were concerning, the comments in today’s report were more bullish (emphasis added; these are excerpts):

The status of enhanced unemployment benefits is questionable:

With the parties far apart on multiple issues, however, it’s unclear whether it will be possible to achieve that goal. House Speaker Nancy Pelosi (D-Calif.) was noncommittal on the timing in a mid-day interview on MSNBC Wednesday, saying: “I’m confident that we will have an agreement. The timing of it I can’t say because I don’t know, it just depends.”

I think Friday’s numbers will either kill or accelerate the talks.

Smaller-cap indexes continue to make headway: small-caps gained a bit more than 2%; micros and mid-caps also made decent advances. Large-caps had less impressive gains. The best news for the bulls is that the long end of the Treasury market sold off a bit.

Let’s start in the middle of the table, where technology and communication services were right around 0%. It’s hard for the larger-cap indexes to have strong gains when those sectors are weak. Traders bid up basic materials and industrials on positive news from the manufacturing sector over the last few days. Defensive sectors lost some ground.

There is good and bad news in the above data. The good news is that small-caps are making solid advances; larger-caps are also moving higher. However, the charts show a very hesitant move. Let’s start with the IWM: 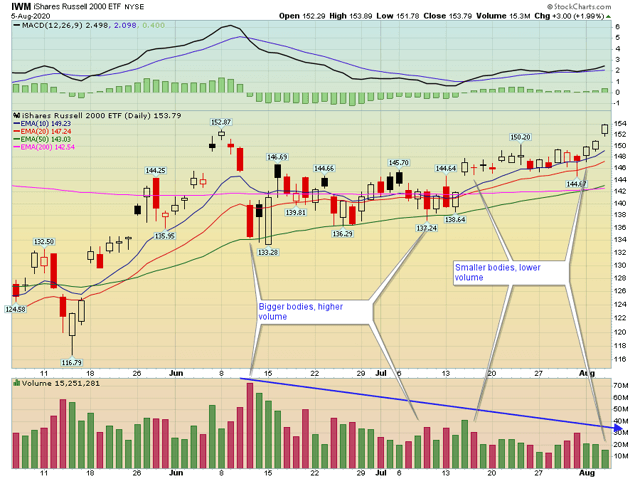 Between early June and July, volume was higher and the daily bars were larger, indicating more movement during the trading session. But since early July, trading volume has been declining and the daily bars have been smaller. Momentum is also down. There aren’t fatal developments. But they do indicate a lack of gusto in the underlying trading that is modestly concerning. 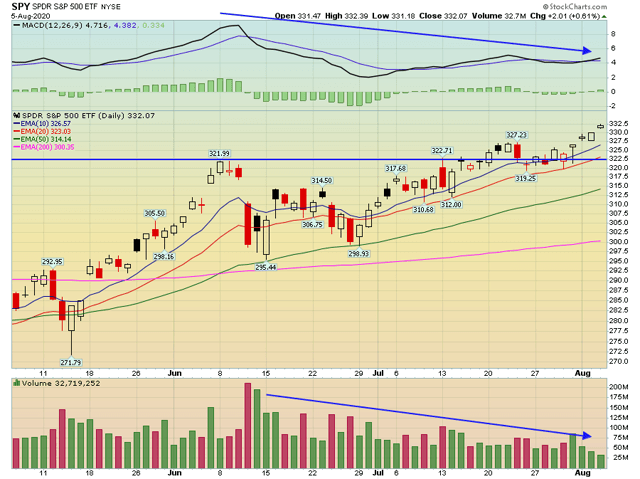 The SPY has the same pattern, although it does have larger daily bars than the IWM.

Personally, I think Friday’s jobs report is very important. If it follows the ADP trend with a lower-than-projected print, I’d expect a sell-off — perhaps the beginning of a longer-term drop. But if it’s fair, then the indexes will have all the excuse they need to keep moving higher.