Enerplus Corporation (NYSE:ERF) is an independent exploration and production company with operations throughout North America. Although the company was originally a Canadian royalty trust and is one of the largest independents in Canada, it has since expanded from its roots and is now active in some of the most prominent basins in the United States. Admittedly, there is still a great deal of fear surrounding independent upstream companies due to the still low energy price environment, but Enerplus has a long history of being able to prosper throughout the whole cycle. Let us investigate and see if this company could be right for your portfolio.

Although Enerplus was originally founded in 1986 as a Canadian royalty trust, today most of the company’s production actually comes from the Bakken shale.

We can see that the majority of the company’s production is oil and not natural gas. In the past, this is something that many people liked about the company because oil production was considerably more profitable than the production of natural gas. Unfortunately though, oil prices also fell much more than natural gas as a result of the COVID-19 outbreak. As we can see here, West Texas Intermediate crude oil sold for $61.18 per barrel at the start of the year but has since fallen to $40.62 per barrel, which is a 34.26% decline:

At its lowest point, West Texas Intermediate crude oil was actually selling for $-37.63 per barrel, which would have been a 161.63% decline from its price at the start of the year. Natural gas prices did not decline by anywhere close to this magnitude. Therefore, those companies that produce primarily oil would have been hurt much more by the coronavirus-driven energy price decline than natural gas producers like Range Resources (RRC).

One method that independents often use to reduce their exposure to large fluctuations in commodity prices (like what we saw earlier this year) is the use of hedges. This generally involves things like the use of puts and calls or futures contracts to lock in prices for the sale of their production. The purpose of this is to ensure that revenues and cash flows do not fall too much if energy prices do. Enerplus is no exception to this. Here are the current hedges that the company has in place:

As is the case with most options and futures contracts, these may be settled in cash. Thus, the company may still see its actual revenue from selling its products decline, but then make up for it when the hedges settle. In the end, it does not really matter because the company is still receiving the money. As we can see, the prices that Enerplus has locked in are considerably higher than current prices, which explains why Enerplus expects to realize a significant gain this year off of its hedges.

Another thing that many companies have been doing to weather the current environment is to reduce their expenses in various areas. Enerplus is also no exception to this. The company originally planned to spend between $520 and $570 million on capital expenditures such as drilling new wells in 2020. It has now reduced that by 45% to $300 million in order to preserve its capital. In addition to this, the company has suspended all drilling and completions activity in North Dakota. This may be a good idea due to the relatively high cost of drilling in that area, but there is a downside. This downside is the relatively high decline rate of wells in the Bakken. As I pointed out in an earlier article, the production of a well in the Bakken shale declines by 69% on average in the first year: 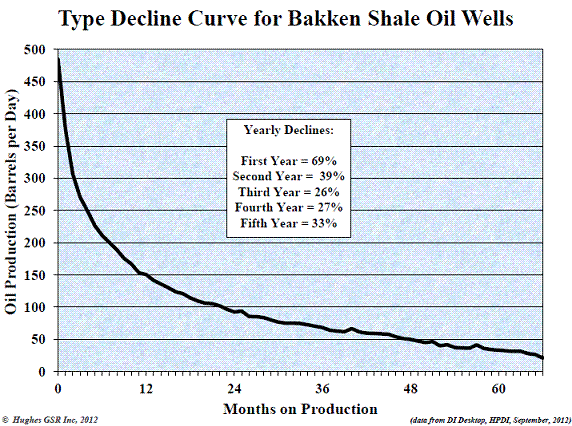 As Enerplus currently produces 49,500 barrels of oil equivalents per day in the Bakken, the company could see this as low as 15,345 barrels of oil equivalents per day if it does not drill any more for the next year. Admittedly, this is probably a pessimistic estimate because some of its wells in the basin are older ones that will not see such severe production declines, but it still seems obvious that the company will see some very noticeable production declines depending on how long it keeps drilling suspended.

Fortunately, Enerplus’s primary acreage in the Bakken is one of the best areas in which the company can operate. The company owns 66,300 net acres in Fort Berthold, which allows its wells to perform in the top quartile of all wells in the Williston basin. 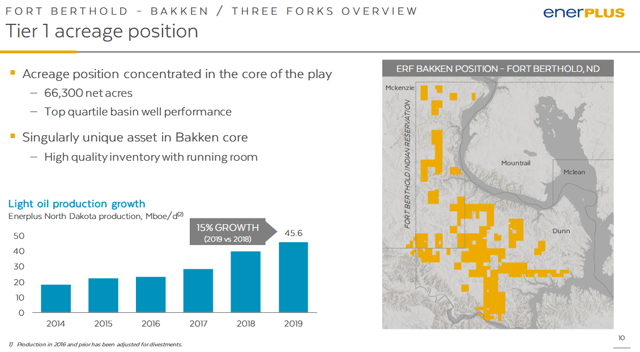 One of the nice things about this area is that it has some of the lowest costs in the Bakken. In fact, Enerplus only needs to realize a $38 per barrel price in order to break even on the wells that it drills in this acreage:

Some readers might note that the price of West Texas Intermediate was well below this level for a good portion of this year. While that is correct, please keep in mind that due to the hedges that we have already discussed, Enerplus is receiving a much higher price than today’s (mid-$50/bbl on much of its production). Thus, we can see that the company is still able to make a profit off of the wells that it drills in this acreage.

Enerplus also owns acreage in the Marcellus shale, which produces natural gas. The company owns 34,000 net acres, primarily in the northern parts of the basin: 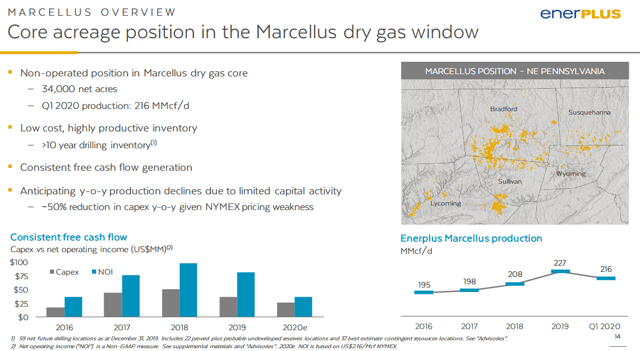 The economics of producing natural gas in the Marcellus basin are decidedly better than the economics of producing oil in the Bakken. First of all, even at the start of April, natural gas prices were only down 29% from the start of the year, which was much less than oil. This makes some sense as people under stay-at-home orders still need to heat their homes and cook their food. While the demand for natural gas from industry may have declined due to the economic shutdown, it retained its demand from the utility and consumer sectors. It is also much cheaper to produce natural gas in the Marcellus than it is to produce oil in the Bakken. In fact, as we can see above, Enerplus still expects that it will be able to be cash flow positive even with natural gas prices at today’s levels. With that said, we can see evidence that the company is correct here: 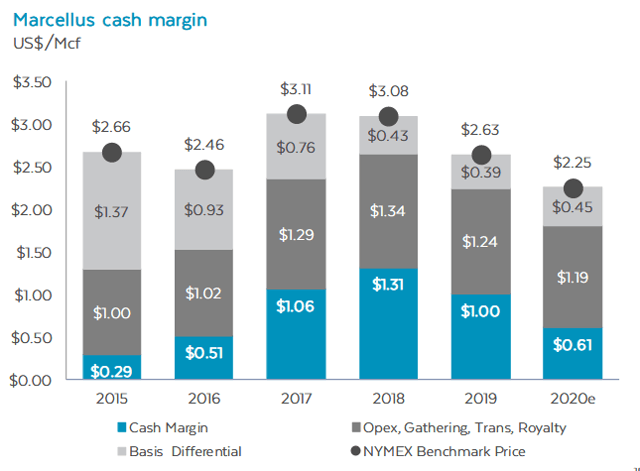 While the company’s current acreage in the United States is quite impressive, it has managed to identify some expansion opportunities. One of these is in the Denver-Julesburg basin in Colorado. The company recently acquired 40,000 net acres in the northern part of the Wattenberg field in Weld County: 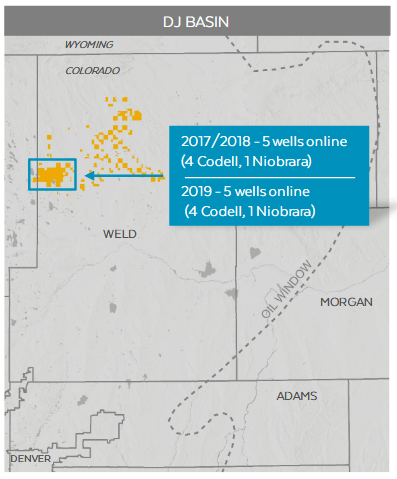 This is an area that has a significant quantity of oil in place, although Enerplus has not disclosed exactly how much. The company has drilled some test wells though, which performed comparably to what its peers have been seeing out of their wells in the core area of the basin. As such then, the company has identified 400 sites for future drilling in order to begin production in the acreage. It is uncertain when the company will actually begin bringing these resources into production, however. As already discussed, Enerplus has cut back considerably on its planned capital spending this year so it is quite possible that these cuts include the postponement of its plans to develop this area. Thus, we may not see this growth opportunity begin to play out this year.

One of the most important things for us to keep an eye on with regards to independents in today’s environment is the strength of their balance sheets. This is because a large percentage of the production growth that the United States has seen over the past decade was financed by high-yield debt so the drop in energy prices may begin pushing some companies into bankruptcy. I discussed this in an earlier article and we have already seen this playing out with companies like Chesapeake Energy (OTCPK:CHKAQ). Fortunately, Enerplus has a reasonably strong balance sheet. One way that we can see this is by looking at the company’s debt maturities. Here they are: 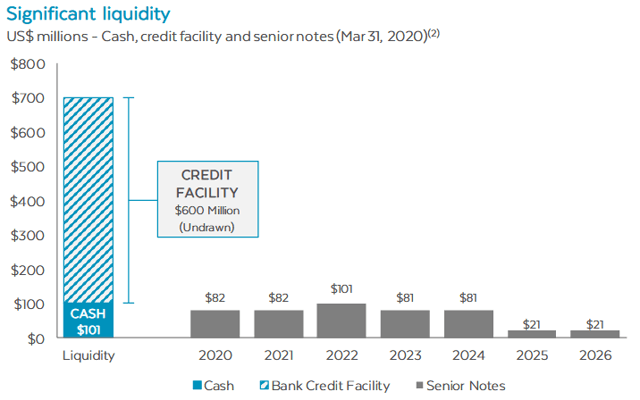 As we can see here, Enerplus has enough cash on its balance sheet to cover all of its debt that matures this year. Its untapped revolving credit facility is also large enough to cover all of the $469 million in senior notes that come due between now and the end of 2026. Thus, we can conclude that Enerplus will not have any difficulty covering all of the debt that is coming due even if the market is unfriendly to the company’s attempts to refinance. Admittedly, I would not want to see the firm have to use this revolver to pay off its maturing notes, but it is certainly an option.

We can also see the strength of Enerplus’s balance sheet by comparing the company’s debt to its cash flow. As of March 31, 2020 (the latest date for which data is available), Enerplus had $114.746 million in current debt and $541.950 million in long-term debt for a total of $656.696 million. In the first quarter, Enerplus reported adjusted funds from operations of $113.2 million, which works out to $452.8 million annualized. This gives the company a net debt-to adjusted FFO of 1.14. This is a reasonably low figure that provides us with confidence that Enerplus will be able to weather through the current environment and ultimately return to both growth and prosperity once conditions improve. We can see this by comparing this metric to some of its peers:

It is important to note that adjusted funds from operations is a non-GAAP figure so all of the companies above may calculate it in a slightly different way. Nonetheless, they do provide the figures as a basis for peer comparison by analysts, so they are generally calculated at least somewhat similar. As we can see, Enerplus generally compares fairly well with its peers. This tells us that the company should be able to carry its debt easier than some of its peers.

In conclusion, Enerplus Corporation appears to be one of the better positioned firms for the current environment. The company has some of the best acreage available in the Bakken shale, and while this is an expensive area to produce in, its hedges and efficient operations should still allow it to make a profit. It also appears to be taking all the necessary steps to preserve its capital and avoid unnecessary expenses. The company also boasts the potential for future growth in the DJ basin and boasts a very strong balance sheet. Overall, Enerplus may be worth considering for your portfolio.