Looking ahead, July’s ISM manufacturing survey is in focus. It is expected to show that the US factory sector grew for a second consecutive month after April and May marked the worst two months in 12 years. Still, last week’s Q2 GDP data is a reminder that the rise comes from the lowest base in almost six years.

US economic data flow had been impressively outperforming baseline forecasts since early May but momentum may be fizzling. This hints that analysts’ models may be catching up with actual economic conditions telegraphed in realized outcomes.

This may undermine scope for upside surprises. Within this context, the ISM release might amount to a non-event if the outcome registers relatively in line with expectations. On the other hand, a disappointment may generate an outsized risk-off response.

That bodes ill for cyclical crude oil prices, which track lower alongside stocks in such a scenario. Gold prices may be vulnerable as well if the US Dollar manages to reclaim its haven appeal amid a liquidation-prone backdrop. In that event, ebbing anti-fiat demand threatens the yellow metal.

Get Your Free Oil Forecast

Crude oil prices look poised to edge lower after completing a bearish Rising Wedge chart formation. The next layer of support looks to be at 34.78, with a break below that setting the stage for a test below the $30/bbl figure. Alternatively, a push past resistance in the 42.40-43.88 area may expose the $50/bbl handle. 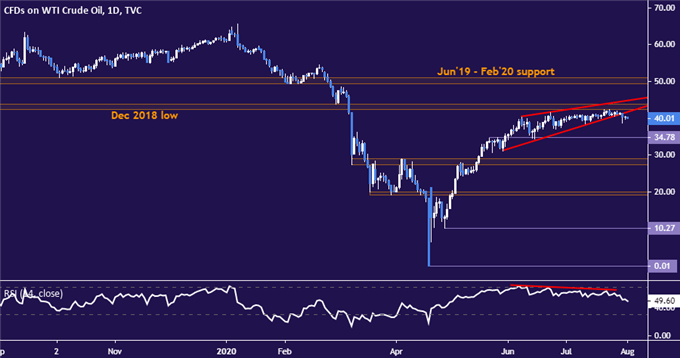 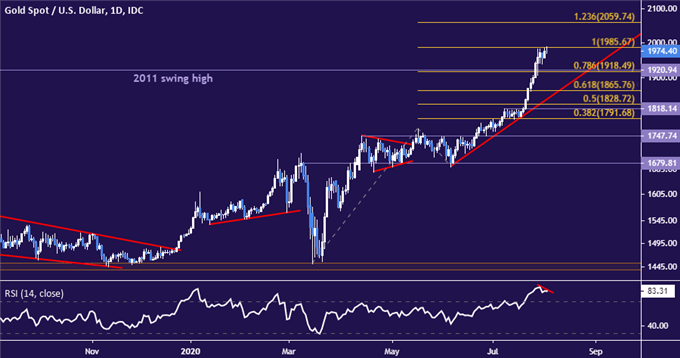 Get Your Free Gold Forecast