After the bell on Wednesday, we received second-quarter results from communication services company CenturyLink (CTL). Over the past two years, the company has been working to improve its balance sheet and debt profile, all while trying to keep revenues from declining as much as possible. This week’s results showed that things are going better than expected, which means the long-term story is still intact.

For the quarter, revenues came in at $5.19 billion, down 3.5% year over year. However, that number was about $50 million ahead of Street expectations, so the decline wasn’t as bad as expected. Enterprise revenues actually grew by 2% over Q2 2019, while all other segments showed low- to mid-single digit declines. At the same time, the company brought down its expense base, achieving approximately $620 million of annualized run-rate Adjusted EBITDA cost transformation savings against its three-year goal of $800 million-$1 billion.

Reported net income was up $6 million year over year to $377 million. However, if you exclude special items and integration and transformation costs, net income rose from $369 million to $450 million. Non-GAAP earnings per share came in at $0.42, beating Street estimates by a dime, while GAAP EPS of $0.35 beat by seven cents.

As I’ve been detailing for nearly a year now, CenturyLink is working to transform its balance sheet and reduce interest expense. The chart below shows how much progress has been made, with GAAP interest down $104 million over the prior-year period. Due to low rates as well as the progress that has been made, the company reduced its yearly interest forecast by $100 million, which includes some debt transactions that will close this month. 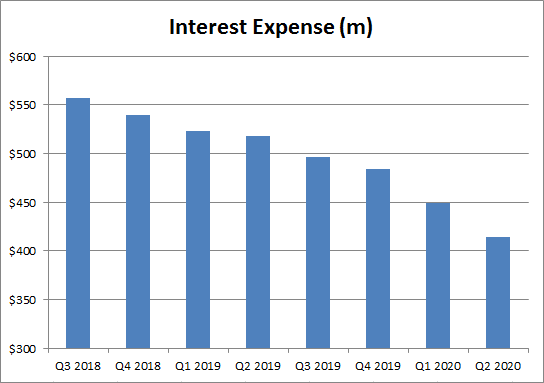 The total debt pile finished Q2 just under $34.3 billion, down $311 million during the quarter. Over the past 9 quarters, the company has brought that large amount of debt down by more than $3 billion, while pushing a number of maturities further out to the future and reducing interest rates on many borrowings. With solid free cash flow production, I expect we will see the amount of debt continue to decrease moving forward.

The main reason that investors continue to like CenturyLink is its income potential. The company closed at $9.84 prior to earnings, which meant the one dollar yearly dividend equaled a 10.16% annual yield. The dividend is completely safe currently, and you aren’t going to earn anywhere near that kind of income with most fixed-income instruments right now. I actually believe that if the company’s progress continues over the next few quarters, there is room to raise the dividend slightly if management slows down its debt repayments a little.

In the end, CenturyLink reported second-quarter results that were much better than estimates, especially on the bottom line. While revenues are coming down, costs are declining even faster, leading to a nice rise in adjusted profitability. Management also continues to make tremendous progress on the balance sheet, which has reduced quarterly interest costs (on an annual run-rate basis) by $572 million over just seven quarters. With a healthy balance sheet and solid cash flow, the stock remains an investor favorite for its tremendous income generation.

Additional disclosure: Investors are always reminded that before making any investment, you should do your own proper due diligence on any name directly or indirectly mentioned in this article. Investors should also consider seeking advice from a broker or financial adviser before making any investment decisions. Any material in this article should be considered general information, and not relied on as a formal investment recommendation.