Money will buy you a fine dog, but only love can make it wag its tail” – Richard Friedman

Today, we take an in depth look on a developmental concern for the first time. The company recently addressed its short-term funding needs via a secondary offering, has several drug candidates in the pipeline as well as some upcoming potential catalysts. A full investment analysis is provided in the paragraphs below.

Atara Biotherapeutics, Inc. (ATRA) is a South San Francisco based allogenic T-cell immunotherapy concern focused on the development of novel treatments for patients with oncological, autoimmune, and viral diseases. It has two assets in the clinic with its lead T-cell candidate (tab-cel) currently being evaluated in a two-cohort Phase 3 trial. The company was founded in 2012 and went public in 2014, raising net proceeds of $56.5 million at $11 a share. The shares rode the enthusiasm in the biotech sector as well as the t-cell sub-sector to rise quickly to above $50 a share. That enthusiasm wore off over time, however. The stock currently trades right at $13.50 a share for an approximate market cap of $915 million. 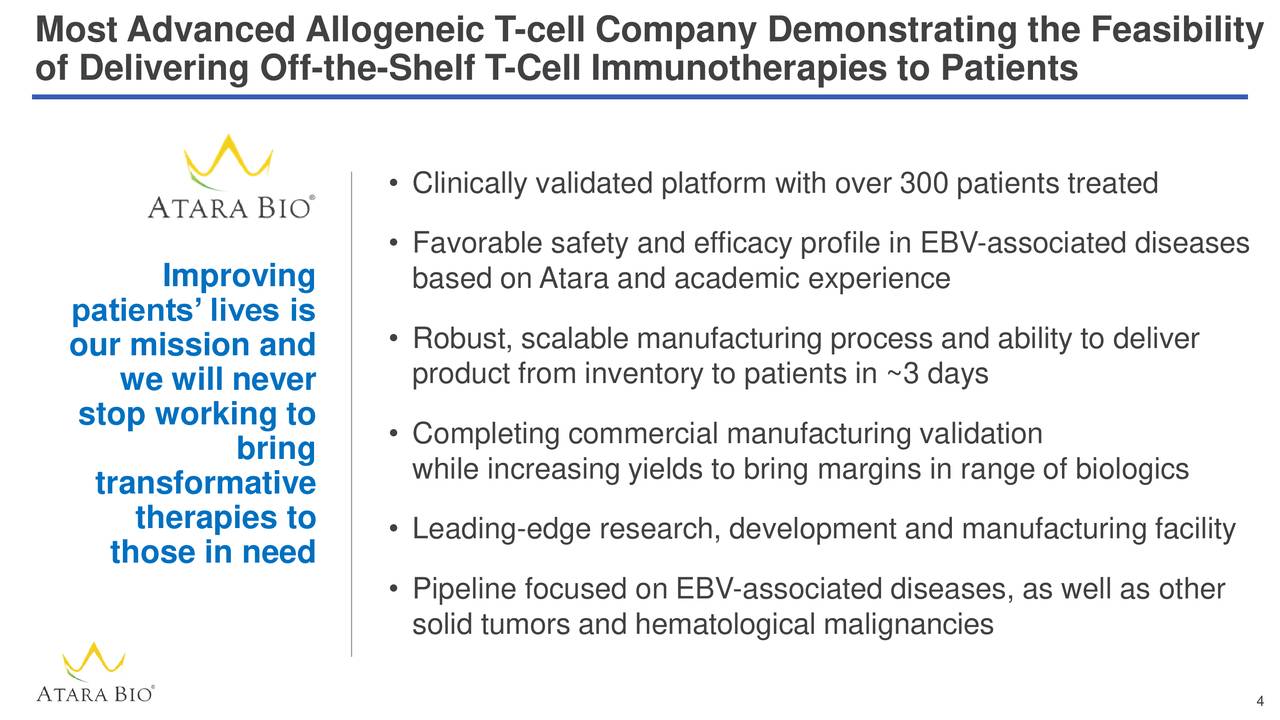 The company’s development platform centers on the Epstein-Barr virus (EBV), an oncovirus implicated in many cancers and autoimmune diseases. EBV is present in more than 95% of the population over the age of 40, yet generally persists as an asymptomatic infection that is managed by a small number of T cells. Owing to this prevalence, EBV T cells from non-patient sources require no gene editing and are less likely to cause adverse effects such as graft vs. host disease. Leveraging these characteristics, Atara has developed novel allogenic EBV T-cell immunotherapies that can be manufactured in advance and stored in inventory. This approach is in contrast to autologous immunotherapies, which require the patient’s own cells to be extracted, modified outside the body, and then redelivered. The company maintains the natural biology of the EBV T cells by selecting the most appropriate human leukocyte antigen (HLA) alleles for a patient – with at least two matches. With this portfolio of EBV T cells, Atara can deliver an off-the-shelf therapy to a patient in three days. 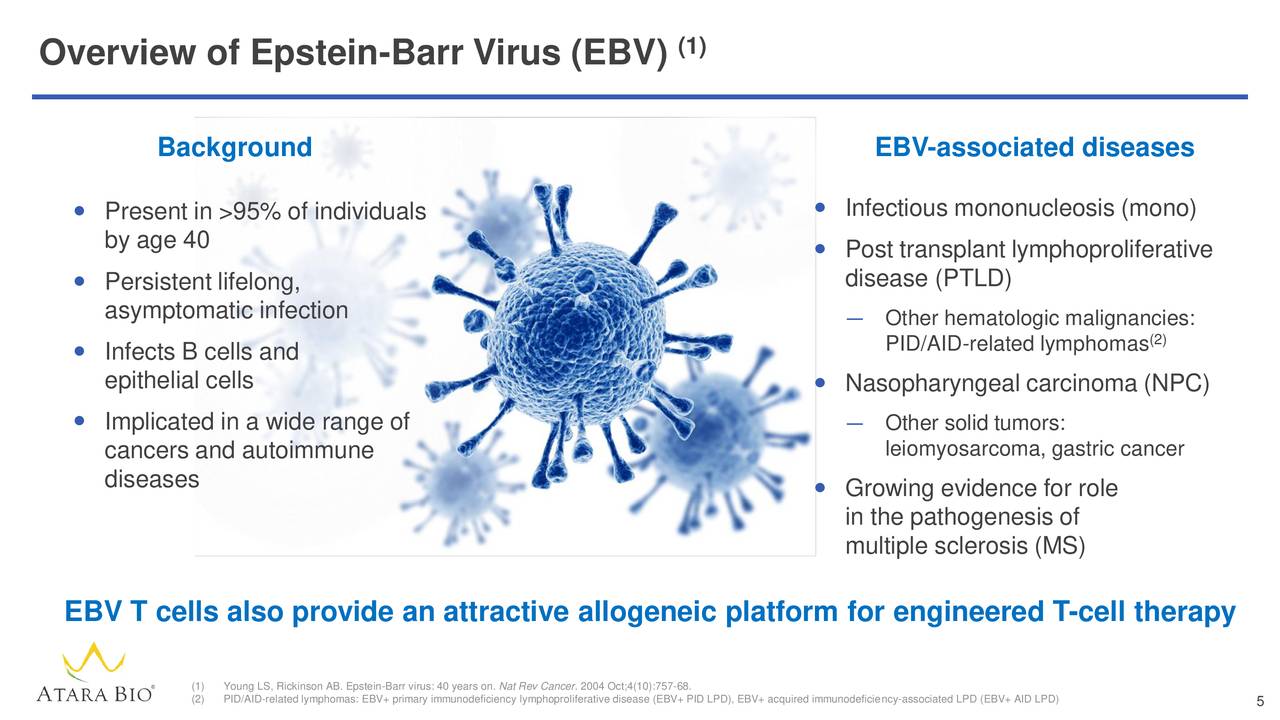 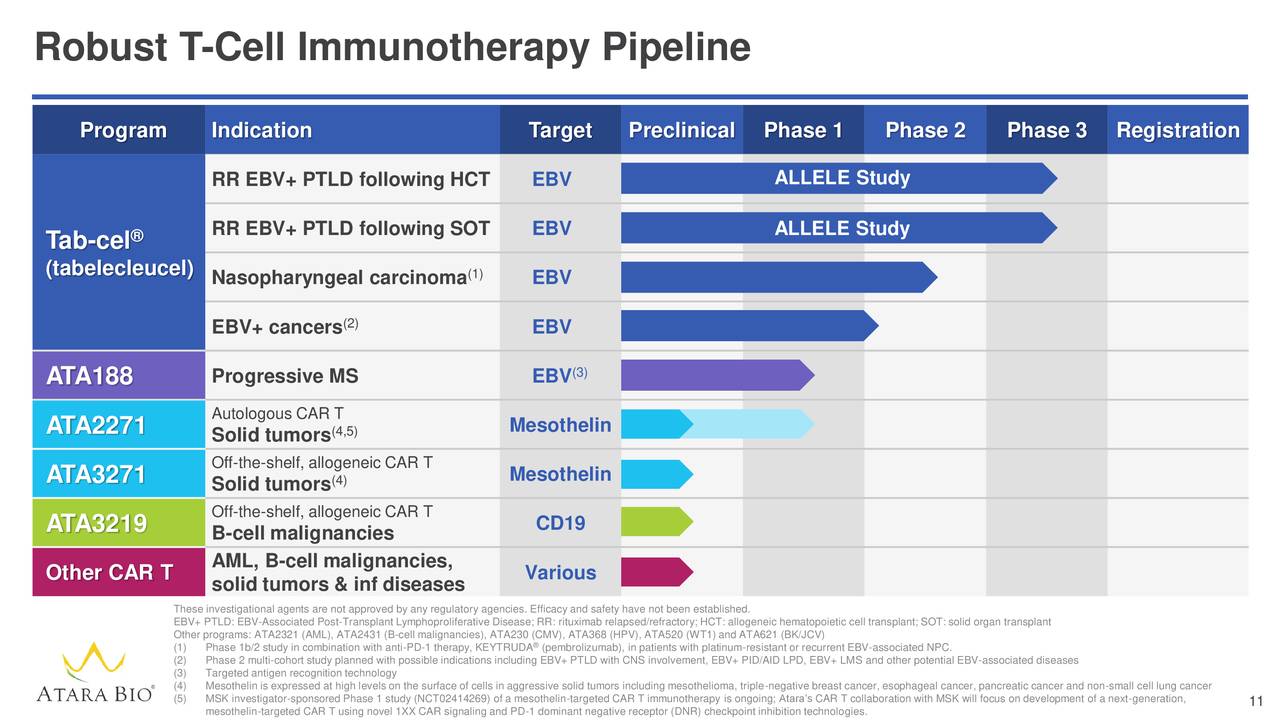 Tab-cel. Its lead candidate is tab-cel (tabelecleucel), an allogenic T-cell immunotherapy being assessed in what is now one Phase 3 study. Although EBV is managed without incident in much of the population, it can have deadly consequences for immunocompromised patients, including those undergoing hematopoietic cell (bone marrow) transplants {HCT}. That patient subset is susceptible to contracting a cancer known as EBV+ post-transplant lymphoproliferative disorder {PTLD}, a rare B-cell lymphoma with no approved therapy. Nearly all cases of PTLD that occur post-HCT are EBV positive. EBV+ PTLD post-HCT is currently treated with rituximab with or without chemo, but for those who do not respond, death usually occurs in under one month. 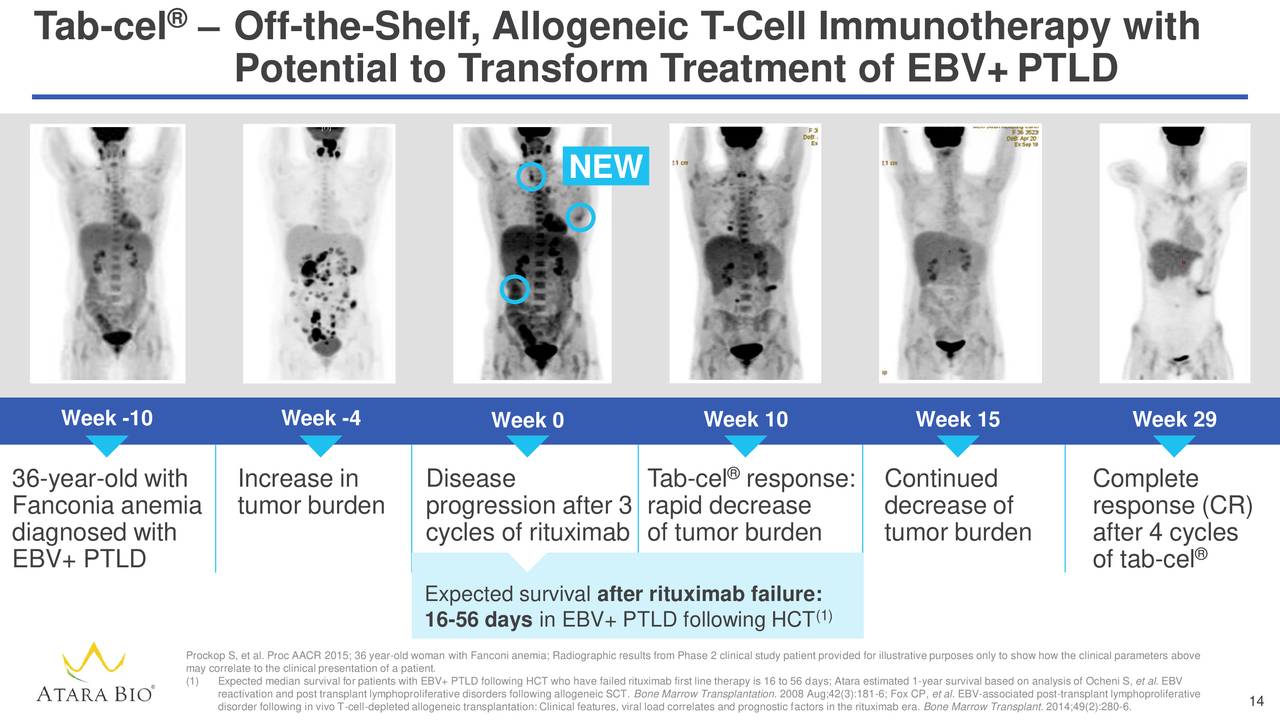 In two earlier stage studies, EBV+ PTLD patients who were relapsed/refractory to rituximab +/- chemotherapy post-HCT had a one-year overall survival {OS} of approximately 70% on tab-cel monotherapy versus a historical norm of 23%. In patients who responded to treatment (24 of 35), the two-year OS was just north of 80%.

This same phenomenon occurs in solid organ transplants (SOT), where ~60% of PTLD cases are EBV+ and death amongst those not responding to rituximab usually occurs in three to twelve months. In those same two earlier stage studies, one-year OS of ~60% was observed in EBV+ PTLD patients post-SOT who had failed rituximab versus a historical norm of 36%.

These indications are ultra-rare, as Atara believes the annual American population for EBV+ PTLD post-HCT or post-SOT who are relapse/refractory to rituximab +/- chemo is only several hundred. 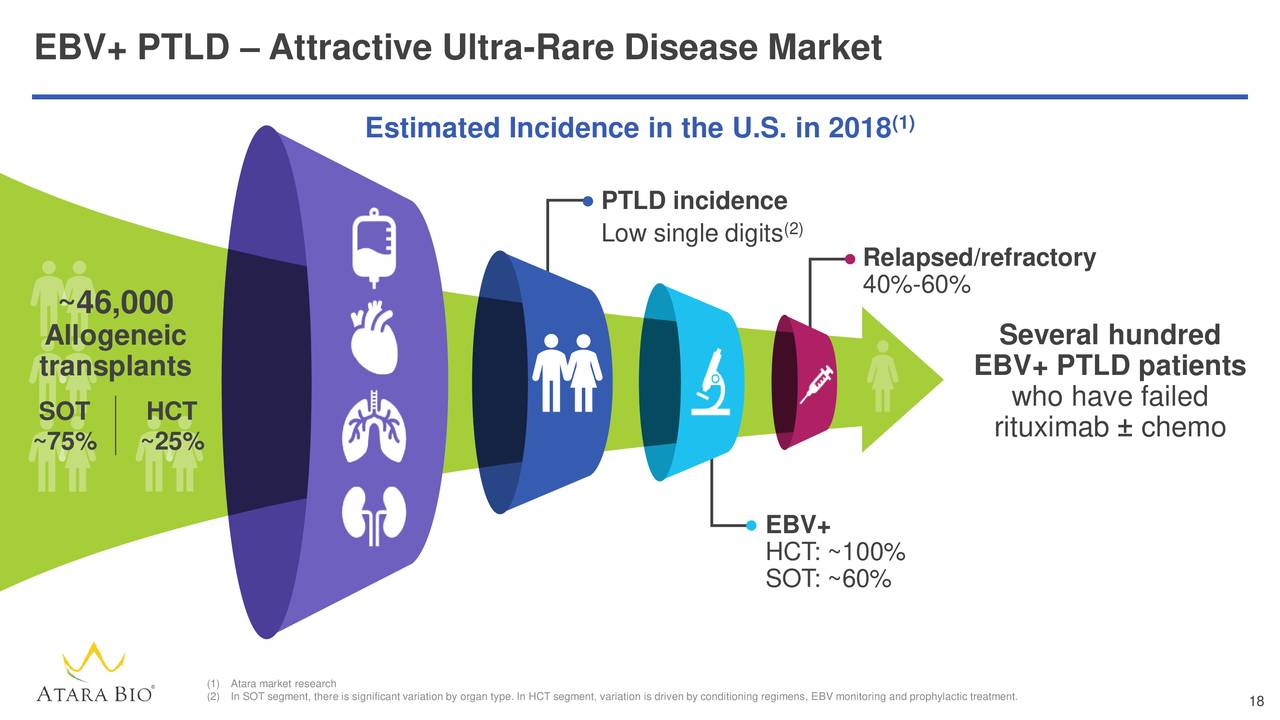 Based on these prior results, tab-cel was initially enrolled in two Phase 3 studies, which initiated in December 2017 – one for HCT (35 patients); and one for SOT (with two 35-patient cohorts). Due to the rare nature of the diseases, enrollment was poor, slowing the progression of the studies. In 2019, the two studies were combined into one with an HCT cohort who have failed rituximab and one SOT cohort who have failed rituximab +/- chemo. The primary endpoint is overall response rate (ORR), designed to rule out 20% ORR as the null hypothesis. In other words, if the lower bound of the 95% confidence interval on ORR exceeds 20%, tab-cel will achieve its primary endpoint. Given the number of patients in each cohort (~33), the ORR threshold to achieve statistical significance is 37%. For reference, in tab-cel’s prior trials, it achieved 73% ORR for HCT (n=46) and 64% for SOT (n=25).

With a sufficient number of patients now enrolled, an interim analysis is expected in 3Q20, which should support a BLA submission in 2H20 for both indications, as well as a marketing application with the EMA in 2021. Given the life-altering outcomes in tab-cel’s previous trials and the lack of an approved therapy, there exists a high level of confidence in its eventual approval, which would make it the first ever allogenic T-cell therapy. Tab-cel has received Breakthrough Therapy and Orphan designations from the FDA for these indications.

Tab-cel is also being considered in combination with Merck’s (MRK) immunotherapy Keytruda in an ongoing Phase 1b/2 trial for patients with EBV-associated, platinum-resistant or recurrent metastatic nasopharyngeal carcinoma (EBV+ NPC). Although the final patient was enrolled in February 2020, no timeframe for a readout has been set. There are no approved remedies for EBV+ NPC, which is currently addressed with chemo plus a targeted agent. The company believes ~3,800 were afflicted with this ultra-rare disease in the U.S. and the EU5 during 2018. Median OS for EBV+ NPC patients is five to eleven months, providing much room for better outcomes. 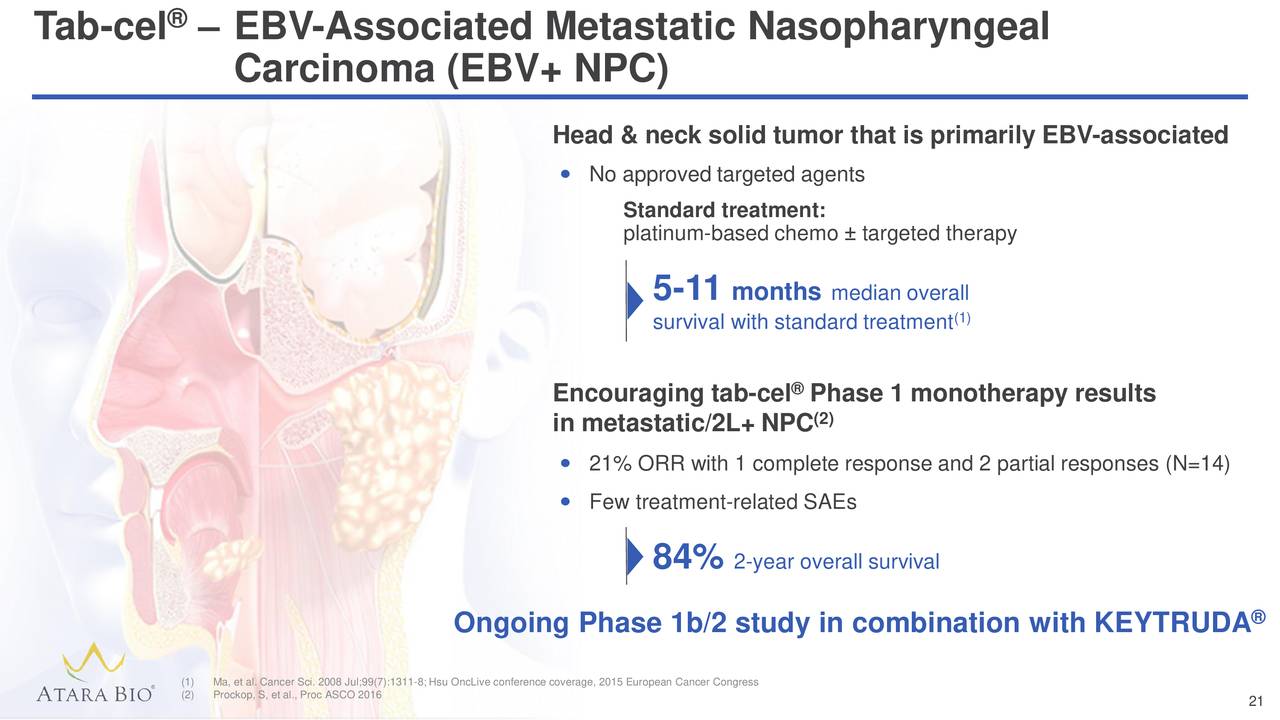 Atara is also planning a multi-cohort Phase 2 study for up to six other ultra-rare EBV+ cancers that should initiate in 2H20.

ATA188. EBV is also a known precondition of multiple sclerosis {MS}. In response, Atara’s platform has spawned ATA188, an allogenic T-cell therapy that employs a MS-specific targeted antigen recognition technology to selectively attack cells that are EBV+, while sparing those that are not. In a four-cohort, six patients per cohort dose escalation Phase 1a trial, ATA188 demonstrated promise, the results of which were formally read out on May 22, 2020. It was well-tolerated with the third cohort achieving sustained disability improvement {SDI} in three of six patients at twelve months. The third cohort dosage (ATA188 2 x 107) has been selected for advancement into a 36-patient Phase 1b study, which was temporarily suspended due to COVID-19 but resumed on May 19, 2020 with the first patient enrolled on June 17th. Rumors of this news and the actual results caused a ~70% intraday trough-to-peak spike in shares of ATRA from May 20th – 22nd, before a secondary offering was announced after the close of the subsequent trading session. 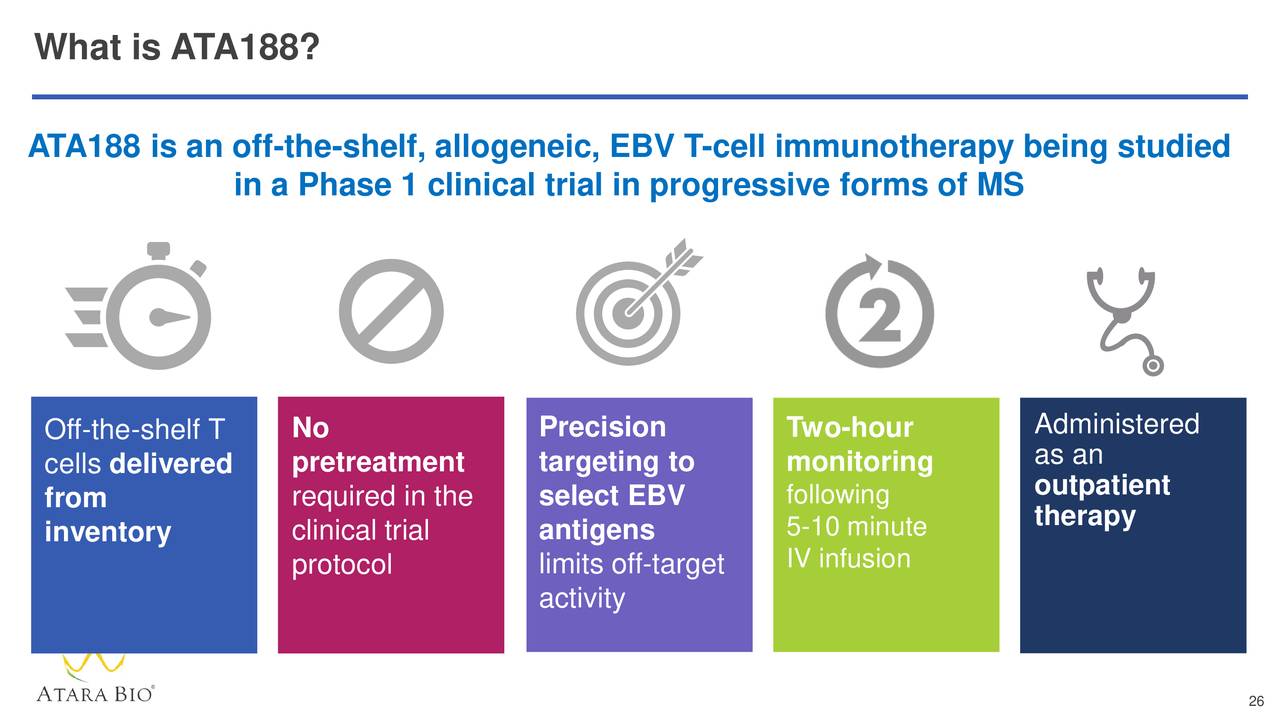 Pre-Clinical CAR-Ts. In addition to its two clinical assets, Atara has two programs it expects to enter into the clinic in 2H20, or shortly thereafter. First, its partner Memorial Sloan Kettering is expected to file an IND for ATA2271, an autologous mesothelin-targeted CAR-T for patients with advance mesothelioma. The company is also working on an allogenic version of this therapy (ATA3271). Also, in February 2020, Atara presented findings from a proof-of-principal study concerning an off-the-shelf, allogenic EBV T-cell construct for patients with relapsed/refractory B-cell malignancies that demonstrated the longest duration of complete responses for an allogenic CD19 CAR T with median follow up of 26.9 months for 83% (5/6) of the patients who received partially HLA matched EBV CD19 CAR T cells manufactured from third-party donors.

The Street has become more constructive on Atara with H. C. Wainwright initiating coverage with a buy rating in mid-June and Citigroup upgrading the stock to a buy from a neutral back in April. Overall there are seven buys, two holds, and one sell rating with a median twelve-month price target of $23 a share. In mid July, Canaccord Genuity reiterated their Buy rating and $70 price target (easily the highest on the Street) on the stock.

To date, Atara has delivered exciting results from its allogenic EBV T-cell immunotherapies. Unfortunately, the ultra-rare nature of the diseases it targets makes clinical trials very time-consuming with enrollment cadence difficult to predict. (Miscalculations as to the timing of the tab-cel readouts likely played a role in the departures of the Chief Scientific Officer and the Head of Corporate Strategy in October 2019.) Even though catalysts are on the immediate horizon with the 3Q20 interim data readout of tab-cell for EBV+ PTLD indications and the entry into the clinic of two additional programs, there is really a news vacuum for the balance of the year, making Atara a solid candidate for a buy-write.

I like Atara for a ‘watch item’ position. The company has multiple ‘shots on goal’ and upcoming catalysts. The stock’s history of extreme volatility and its huge cash burn rate prevent me from recommending it for the model portfolio at this time, especially when we already have an overweight allocation to the biotech sector.

One can initiate a small watch item position by slowly accumulating shares on dips in the market or via a covered call strategy. Although option premium is certainly built in for the 3Q20 interim readout, it would amount to a shock if tab-cel did not achieve its primary endpoints in the EBV+ PTLD Phase 3 trial. Admittedly, the indications involve small sample sizes because of their ultra-rare nature, but they are substantially de-risked given past results and no approved therapies. With the first patient enrolling in the Phase 1b/2 trial on June 17, 2020, there should be a news vacuum for this candidate as well. Option liquidity is just so-so in this name but I initiated a small stake in Atara using covered call orders in July.

If you think nobody cares if you’re alive, try missing a couple of car payments.” – Earl Wilson

Bret Jensen is the Founder of and authors articles for the Biotech Forum, Busted IPO Forum, and Insiders Forum

Author’s note: I present and update my best small-cap Busted IPO stock ideas only to subscribers of my exclusive marketplace, The Busted IPO Forum. Join our community today by clicking on our logo below!

Disclosure: I am/we are long ATRA. I wrote this article myself, and it expresses my own opinions. I am not receiving compensation for it (other than from Seeking Alpha). I have no business relationship with any company whose stock is mentioned in this article.