After I wrote my first article about my favorite brand Apple (AAPL) in February 2018 on my German language blog, I have now decided to write an article on Seeking Alpha as well.

Actually I wanted to save the article about Apple for the next stock market correction. But given all the stimulus measures to overcome the corona effects on the economy and the outstanding quarterly figures of the technology mega-caps, it is particularly questionable when the stock market will experience a pullback. So I have decided to write the article now.

In my last article on Seeking Alpha I wrote that Alphabet (GOOGL; GOOG) reminds me very much of Apple at the beginning of the year 2018 when the company was struggling with declining sales and an increasingly saturated market so that the company was incredibly cheap valued with a P/E ratio of just around 10.

Nevertheless, the narrative about Apple changed in 2019 so that the company became the top performer among the mega caps with a return of over 170%. Among other things, share buybacks worth tens of billions of dollars, the entry of an anchor investor with Warren Buffett and the contributions of the services and wearables segments have led to a re-evaluation of the stock by investors.

The following chart illustrates Apple’s performance since the beginning of 2019 as the currently most valuable company and brand compared to its peers and the S&P 500.

(Apple’s performance compared to its peers and S&P 500. Source: YCharts)

Concerning this year, with a year-to-date performance of around 50%, the stock is also one of the top performers among the FAANG stocks and has outperformed the S&P 500 index by far (see following chart). 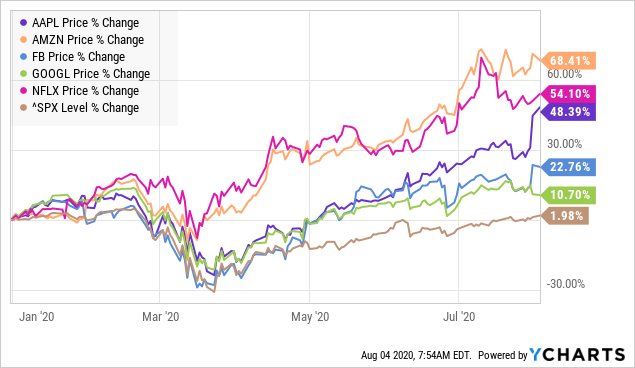 In the following, I would like to give a brief overview of the current quarterly figures and discuss whether an investment in Apple shares is currently worthwhile from a return and risk perspective after the immense rise in the share price. In doing so, I will discuss the fundamentals, valuation and the technical situation. 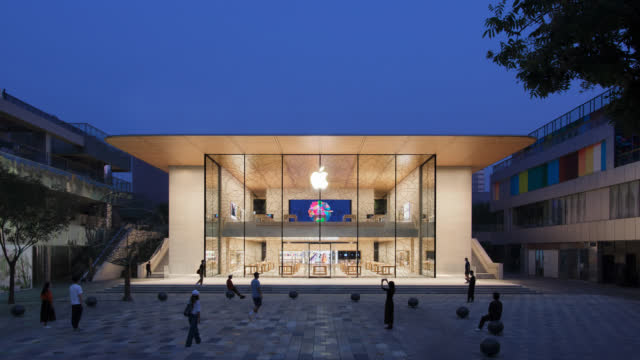 Apple has delivered outstanding quarterly results with growth in all geographic regions, product categories and financial ratios and has exceeded expectations on all fronts.

Overall revenues increased by 11% year-over-year despite several obstacles (e. g. store closures, reduced level of economic activity, supply constraints), while the street expected a revenue decline by around two percent and should have surprised even the biggest bull. Surprisingly, revenue growth was particularly strong in Europe, Japan and the Rest of Asia Pacific with double-digit growth rates.

In this context it is worth mentioning that international sales now account for 60% of total sales, up from 47% in the year ago quarter. This may have both advantages (e.g. less dependence on US consumers) and disadvantages (e.g. greater vulnerability to global economic events).

In my opinion, Apple’s strength so far was especially driven by strong US consumer spending. It will be interesting to see how this revenue mix will play out in the future.

The following figure provides an overview of Apple’s segment results for the past quarter.

Turning to the bottom line, operating and net income increased by 13% or 11%, respectively. Thanks to the extraordinarily high level of share buybacks, the management was even able to push up earnings per share by 18% marking a June quarter record. Additionally, the company generated $16.3 billion in operating cash flow, up $4.6 billion or impressive 39% year over year, also marking a Q3 record.

Furthermore, the company returned over $21 billion to shareholders in Q3, of which around $16 billion was used to finance share buybacks. Net cash was $81 billion at the end of the quarter and given the company’s aim to reach a net cash neutral position over time it can be expected that a large portion of this amount will be invested in further buybacks.

As a big surprise, Apple announced a 4:1 stock split, effective on August 31.

These results of course raise the question of whether the corona virus has increased the demand for Apple products as a result of work-from-home and stimulus paychecks, or whether it is simply the Apple brand that exerts an irresistible attraction on consumers despite the parallel Apple store closures on a global scale in combination with simply overdone Coronavirus fears for specific companies.

3. How did Apple manage to generate such growth in such a challenging environment and how could things continue from here?

Based on the management’s statements during the earnings call, there were events positively and negatively impacted by the coronavirus and its effects like work from home, remote learning, reduced level of economic activity and stimulus checks:

In summary, these strong results helped driving the installed base of active devices to new all-time highs across each of Apple’s product categories.

Considering the strong loyalty of Apple customers and the integration of hardware, software and services, it can be expected that customers new to Apple products will buy products of different product categories as well as sign up for services subscriptions (e. g. Apple Music, AppleTV, Cloud, AppleCard), lifting the cross-selling potential and pushing the company’s overall sales.

An important detail in this context is the increased possibility of financing Apple products in stores for monthly installments with 0% interest as well as trade-in which is becoming a more common trend positively impacting the company’s sales.

While the company was not providing a guidance for the ongoing quarter, a potential vaccine or treatment is expected to boost consumer confidence and the release of the new iPhone 12, despite a delay due to the current circumstances, in combination with the upcoming holiday season could once again push consumer demand for Apple products.

While there is really nothing to criticize from a fundamental point of view since the company delivered impressive figures despite a very difficult environment as a consequence of a global pandemic, let us now take a look at the company’s valuation and chart technical situation.

As already mentioned in the introduction of this article, Apple’s valuation has risen sharply due to a changing narrative and a re-evaluation of the company by investors. Consequently, Apple now has a P/E ratio of nearly 34, which is almost twice as high as its 5-yr-average of 17, according to Morningstar (see following chart). 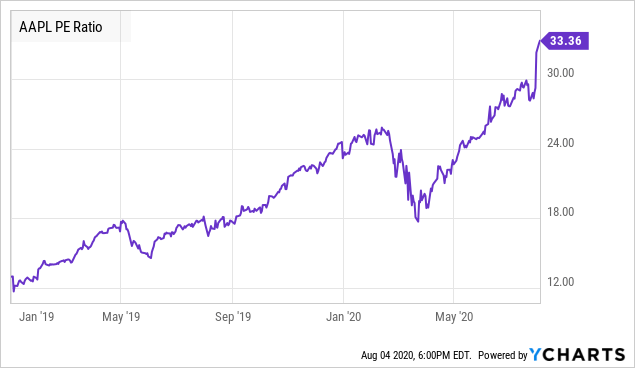 At the same time, the PS ratio has increased to 7, which is also almost double the 5-year average of 3.7, according to Morningstar (see following chart). 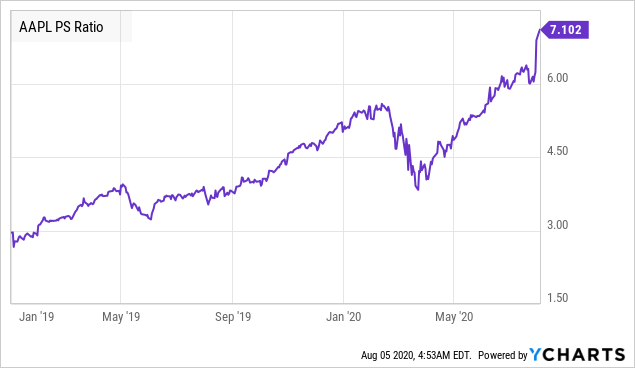 Among other things, share buybacks worth tens of billions of dollars, the entry of an anchor investor with Warren Buffett and the contributions of the services and wearables segments have led to a re-evaluation of the stock by investors.

To put things into perspective, it can make sense to compare Apple with other technology mega-caps in terms of valuation. When looking at the current valuation on a P/S ratio basis, it is noticeable that although Apple is in general the slowest grower among the technology mega caps, it has a relatively high valuation with a 5-year average revenue growth rate of 7%, while the peers delivered double-digit growth rates during the same period, according to Morningstar (excluding Alphabet’s revenue drop in the last quarter; actually I wanted to use the EV/Revenues ratio, which additionally takes into account cash and debt, but there was a technical problem on YCharts). 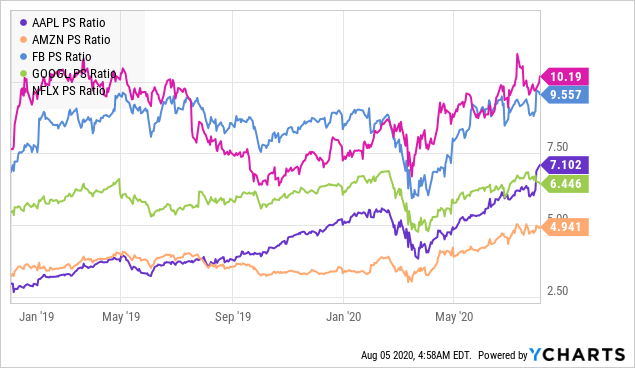 Nevertheless, I prepared two valuation models in order to make a more accurate assessment of the valuation.

The first valuation method is based on a DCF calculation. In order to choose a conservative approach, I have chosen a growth rate of 5% per year in terms of the free cash flow. In the past, the FCF at Apple has been volatile. Additionally, analysts’ consensus predict FCF growth of 8.7% in FY 2021 and 5% in 2022, according to MarketScreener. In terms of Price/Cash flow multiple, I have chosen a multiple of 12.75 for the last FCF, which represents the 5-year average and is half of the current valuation, according to Morningstar.

In the first valuation method based on a DCF calculation, the fair value is $365,89, which corresponds to a current overvaluation of the stock of 17% (see figure below). 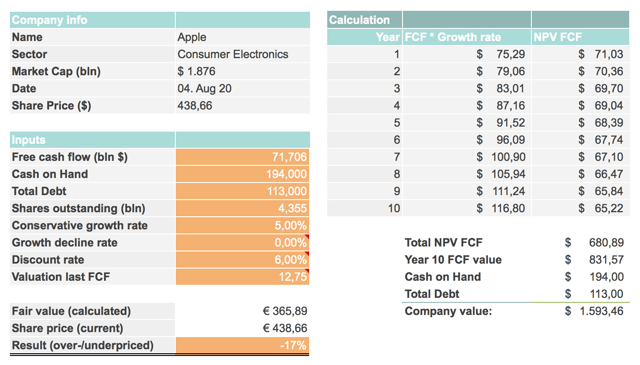 The second valuation method is based on an earnings-per-share calculation. In order to choose a conservative approach, I have chosen a growth rate of 10% per year in terms of EPS growth. The 5-year average EPS growth rate was 13, according to Morningstar. Additionally, analysts’ consensus predict EPS growth of 20% in FY 2021 and 8% in 2022, according to MarketScreener.

In terms of P/E multiple, I have chosen a multiple of 12.75 for calculating the terminal value, which represents the 5-year average and is half of the current valuation, according to Morningstar.

In the second valuation method the fair value is $337,89, which corresponds to an overvaluation of the stock of 23% (see figure below). 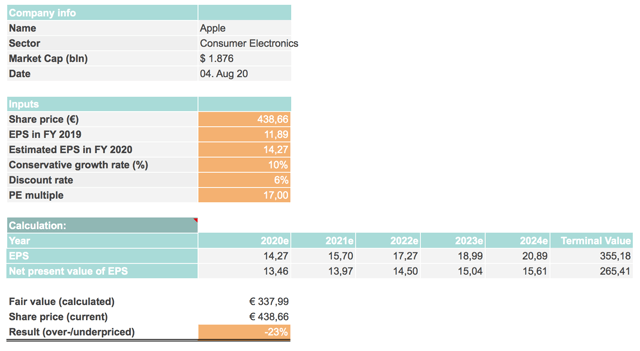 Nevertheless, the current calculation does not include the impact of the outstanding buyback program. The share buy-back program is very likely to have a positive impact to the share price.

For the sake of completeness I have also considered the technical situation. From a technical standpoint, it is notable that the stock has again broken out of its upward trend (see following chart).

On the other hand, the RSI and the MACD show that the share is currently in an overbought situation. This makes a potential correction seem relatively likely, so that, for example, a pullback to the SMA 100 (blue line) or SMA 200 (red line) could create a good buying opportunity (see following chart). 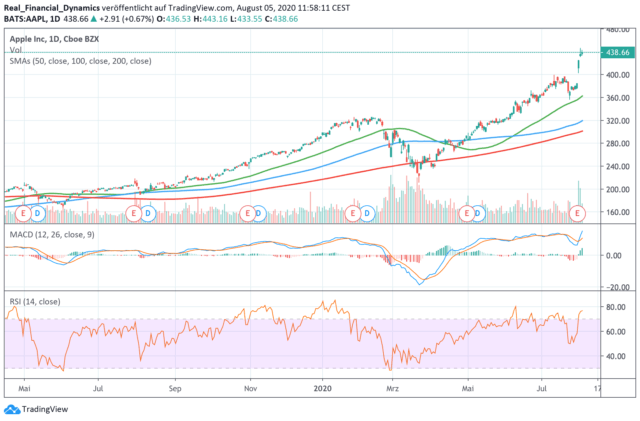 On the one hand, Apple delivered stunning quarterly results with growth in all geographic regions, product categories and financial ratios despite a very challenging environment due to a global pandemic. The user base grew to a new all-time high which could lift the cross-selling potential and push the company’s overall sales in future. New stimulus programs and the upcoming holiday season in combination with new iPhone models could also trigger further demand for Apple products.

Additionally, Apple is heading more and more into a ‘Hardware-as-a-Service’ company where you pay monthly installments with 0% interest for your products and can upgrade your devices by trade-in on a regular basis. As a consequence, this should make Apple’s earnings and cash flows more predictable and less susceptible to fluctuations.

The ongoing share buyback program and the upcoming 4:1 stock split could also provide further share price upside potential. In this respect I also have a point of criticism for the management. While I can understand the stock split, since Apple is represented in the Dow and would have too much weight with a share price of over $400, I currently see no value from a shareholder perspective in continuing the share buyback program at such a pace at the current prices.

As a shareholder, I would be much happier if these funds were used for research and development (e.g. expanding Siri as a virtual assistant) or for acquisitions in promising areas (e.g. tele health, artificial intelligence, augmented reality).

Unfortunately, it currently seems to me that the management is currently more occupied with financial engineering instead of innovation.

Developments, which could put additional pressure on the stock price are, for example, ongoing antitrust probes regarding Apple’s rules for app developers, the ongoing trade dispute between the US and Chinese government as well as reduced levels of economic activity due to the global pandemic.

In summary, it can be stated that while I would not dare to say that one should sell the stock, it might currently make sense to be patient and wait for a better buying opportunity. Consequently, I would currently give Apple a neutral rating.

Disclosure: I am/we are long GOOG, AAPL, GOOGL. I wrote this article myself, and it expresses my own opinions. I am not receiving compensation for it (other than from Seeking Alpha). I have no business relationship with any company whose stock is mentioned in this article.