After I published my previous article about Workhorse Group Inc. (WKHS), the stock delivered 50%-100% returns. In my conclusion section from June 29, I purported mainly a long-term bullish view. However, I do now believe that the current valuation is too elevated, so I decided to close my position. At a company valuation of nearly ~$1.4 billion, versus a target market is $18 billion, it’s difficult to justify staying invested. Besides, the company signed a deal with debt holders, with terms that I don’t view positively. In my opinion, the company has not modeled dilution from convertible debt. The financial terms obtained could be better. There’s also the matter of large stockholders deciding to decrease their stake that has further motivated me to reverse course on my bullishness.

In June 2020, I wrote a bullish thesis about Workhorse Group. I opined that the shares of Workhorse would most likely run if the company will obtain new financing from investors:

My thesis was correct as the company signed a deal with debt holders. Consequently, the stock price increased from $9-$10 to more than $20. Some investors were able to make more than 100% in a few weeks. Congratulations if you made it.

Given the amount of attention that Workhorse Group received from the media and the recent stock returns, I believe that investors would be receptive to a follow-up article. In my view, most investors are likely wondering what to do with the money. Shares of WKHS are trading at $15-$18, and the current valuation is ~$1.4 billion. In my opinion, the upside in the valuation is limited. Some shareholders are most likely thinking about selling shares. I agree with them.

Workhorse sells drone-integrated electric vehicles to the delivery sector. The company is also responsible for designing and manufacturing battery-electric vehicles like trucks and aircrafts. I don’t want to give a lot of details about the company’s patents and technology. Readers should have a look at my previous post, where I provided a lot of information.

Is The Deal With Ryder A New Deal?

In July 2020, the company reported that it is prepared to deliver the first C-Series all-electric vans. The company Ryder Systems Inc. was responsible for distributing the vehicles. Some journalists suggested that the deal was new, whereas it was not:

From researching the last quarterly report, I confirmed that WKHS signed a deal with Ryder a long time ago. It is not a deal signed in July. The vehicles are about to be distributed in July. Ryder is not only distributing vehicles for WKHS, but it also offers repair services, and maintenance services among others:

The Company sells its vehicles to fleet customers directly and through its primary distributor, Ryder System, Inc. (“Ryder”). Ryder also is a maintenance provider for Workhorse, which provides fleet operators with access to Ryder’s network of 800 maintenance facilities and nearly 6,000 trained service technicians across North America.

The issue of whether the deal is new or not is, in my view, very relevant. Traders may be buying shares because some media outlets let them to believe that the company has a new deal. I don’t think that any spike in the share price is legitimately related to the company’s relationship with Ryder System. It is good to know that the company is delivering vehicles, but we all knew about the deal with Ryder.

As I predicted in my previous report, Workhorse’s share price increased when a new financing was obtained. The company raised as much as $70 million through the sale of convertible debt. Investors need to understand that the company will use the proceeds for general corporate purposes. However, the company also indicated that some funds will be used to pay holders of existing warrants. I don’t like that the money is used to pay other equity holders:

I carefully went through the conditions included in the prospectus. Most equity analysts don’t incorporate convertible debt, which I fully respect. Notice that debt holders usually have the right to convert debt into equity, which leads to equity dilution and share price depreciation. In this particular case, debt holders can convert debt and receive shares at an exercise price of $19.

But, that’s not all. Debt holders can receive payments both in cash and equity, which I don’t like. In my opinion, they haven’t modeled dilution from convertible debt. If the company issues equity to pay back the $70 million received, the share price may decline.

I said that the company’s share price would increase if the company receives financing. However, the financial terms obtained could be better. As a result, the share price may increase for some months, but if the company begins to issue a lot of shares, the stock price will most likely decline.

That’s not all. Let me say that I view negatively that several shareholders decided to decrease their stake in the company. In my previous article, I said the following:

I believe that Workhorse Group Inc. would receive money from Marathon when the company decides to raise capital.

Marathon and TRS did not acquire debt or shares, which resulted in them having a less significant position in the stock. In my view, not acquiring a position sends a message to the market: the company may not expand at the impressive level as many investors were expecting:

The most significant shareholders decreased their stakes in the company. The below links show that relevant people inside the organization are selling shares:

I want to ensure that my article focuses on why my long-term view of WKHS has changed meaningfully. Many management share sales have occurred since the end of June, when I wrote my first article. Most of the directors acquired shares before the company announced the issuance of convertible debt. Many of them acquired shares at $2.5-$3, and have now sold at ~$15-$17. These sales may not be surprising, but lend credence to the idea that shares are a bit expensive at $15-$17.

Target Market Is $18 Billion, And Workhorse’s Valuation Is ~$1.4 billion

There are over 300,000 last mile delivery trucks replaced annually in an $18.0 billion market space. Our sales team is focused on securing purchase orders from commercial transportation companies, in this space. These purchases will give us additional data on demand related to electric and extended range electric vehicles.

Additionally, Grand View Research believes that the commercial vehicles market will grow at a CAGR of 7.5% from 2018 to 2025:

In June and July 2020, Workhorse had a total valuation of $1.4 billion, which represents 7% of the total market. I don’t think that the valuation is realistic; the company reported sales of less than $ 1 million in the last quarterly report. 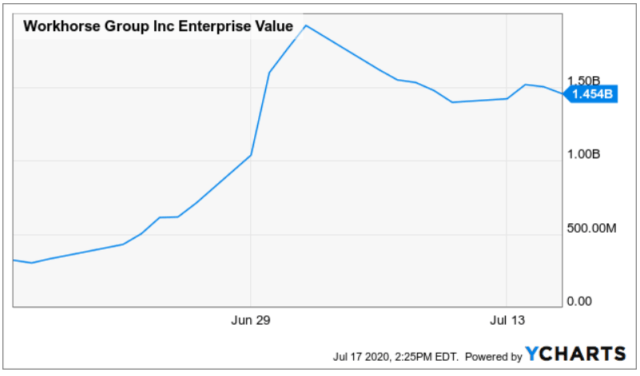 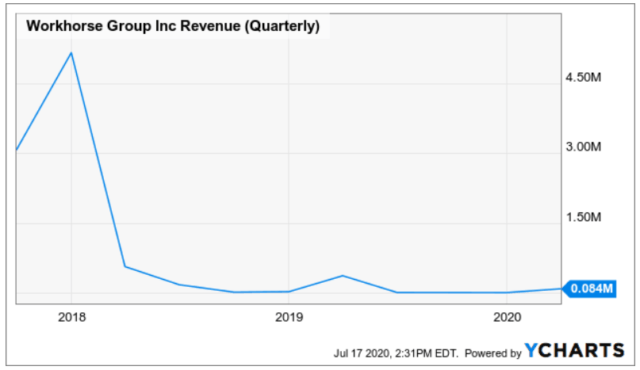 In my previous article, I believed that the most relevant issue at hand was whether the company would obtain financing or not. It looks like I was correct because the share price increased once a deal was signed with debt investors. With that said, right now, I believe that WKHS’s valuation is too high. I also don’t see any clear catalyst, which could drive more upside.

Even in a very optimistic case, where Workhorse increases sales and reaches $10 million in annual revenue, the total valuation of $1-1.4 billion looks too expensive.

I said in a previous article that there’s not much value in looking at the company’s EV/Sales and EV/EBITDA ratio. The company appears to be at too early of a growth stage to use those ratios. With that, for the sake of completeness, take a look at the chart below. Workhorse appears much more expensive than other competitors in the electric vehicle industry: 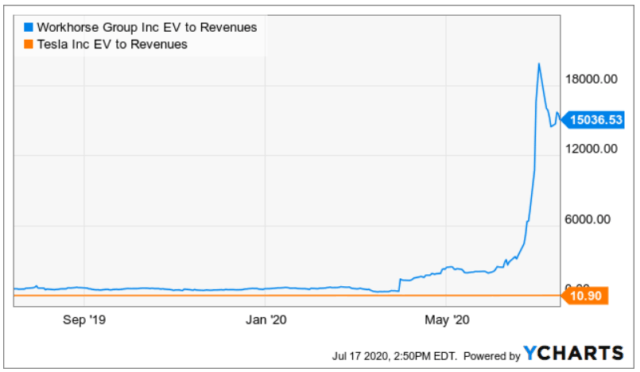 Some short sellers are betting on a declining WKHS share price, including Hindenburg Research claimed who predicted that the stock has a 50% downside. They said that the company’s sales were not enough to justify the current valuation:

After profiting substantially from my previous long position in WKHS, I have decided to close my position in Workhorse. I believe that the current valuation cannot be justified. The company has already obtained financing, taking a catalyst off the table. In my opinion, the share price will most likely decline back to the $7-$9 range or even lower. Note that the company was trading around below that mark when it announced its debt offering.