With more than $26 billion in assets, Western Alliance Bancorp (WAL) has been one of the country’s fastest growing banks of the past decade. However, because of a high concentration in hotel loans and potentially looming credit problems I would recommend avoiding the stock, even at this discounted price.

The bank has ranked in the top 10 on the Forbes “Best Banks in America” list for five consecutive years, 2016-20, and was recognized as the #1 best-performing of the 50 largest public U.S. banks in 2019 by S&P Global Market Intelligence. WAL’s regional segments, which include Arizona, Nevada, Southern California, and Northern California, provide full service banking and related services to their respective markets.

It also has a lending segment call “National Business Lines” (NBL), which provides specialized banking services to niche markets. NBLs are managed centrally and are broader in geographic scope than the other segments, though still predominately within the core market areas throughout the southwest. One of the largest individual loan categories is WAL’s hotel franchise lending operation.

According to company documents, the Hotel Franchise Finance portfolio, focused on “select-service” hotels, made up about $2 billion of the entire loan portfolio at the end of 1Q20 (or about 9% of the portfolio). Like most hotels in the country, WAL indicated during the 1Q20 conference call in mid-April that all of its clients have seen a dramatic reduction in occupancy rates throughout the early spring months. It was also noted that things were so dire that the senior management team was getting involved in the dialogue with each borrower to evaluate remediation efforts and contingency plans. 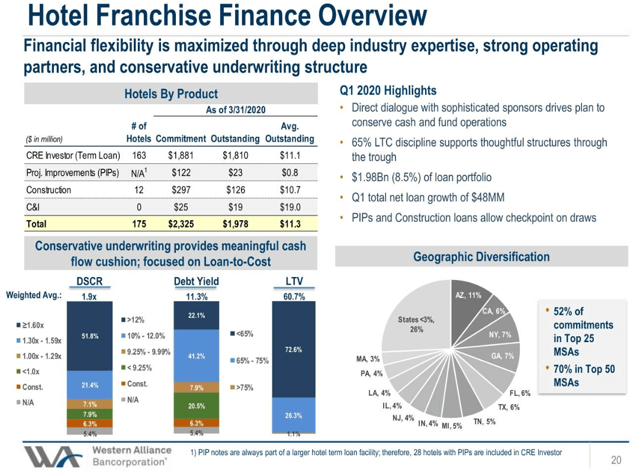 Going into the pandemic, 75% of the hotel portfolio had a loan-to-value (LTV) under 65%, and more than 73% had a debt service coverage ratio of 1.3x. This loan to value metric is very important for overall soundness and credit analysis. For WAL, this 65% LTV metric quite literally means that if the value of the hotel falls to $0.65 on the dollar, that the hotel owner would lose everything, while the bank would still have a well-performing loan. Anything lower and the bank will be forced to take a loss or take control of the asset.

Before getting to that $0.65 point, the bank would be forced to increase its provision in order to mark against the potential for future loan losses. This mark would be a strong headwind to earnings and would signal to the street that the odds of future losses is increasing.

However, this is some near-term government help. Because of COVID-19 the Securities and Exchange Commission has encouraged banks to grant loan payment deferrals. This means that banks are allowed to work with lenders in order to try and create a new payment structure without forcing an official loan loss or bankruptcy on the clients part. Because of this deferral granting activity, it has become increasingly difficult to measure whether the allowance for loan loss reserve is adequate relative to the overall loan portfolio.

Largely because the standard bank lending market is diluted with deferred loans, it has become nearly impossible to measure how lending categories are performing.

I have been closely watching the Commercial Mortgage-Backed Security (CMBS) loans as a potential indicator of future bank credit performance. While the CMBS market is typically made up of larger loan values, it has historically ran parallel to the how bank loans have performed. While I think overall bank loan credit quality could perform slightly better than CMBS loans from peak-to-trough in the economic cycle, it does give a relatively accurate look into how the bank lending market would be performing without such widely granted deferrals.

According to Trepp’s CMBS Research, the Lodging/Hotel industry has 24.3% of all loans in a 30+ day delinquency status at the end of June. This incredibly high market is up from just a tiny 2.7% delinquency in April. WAL’s management team indicated on the 1Q20 conference call that they were working with their Hotel clients to help them receive PPP loans. While their clients likely did receive government assistance, one could also argue that it is very likely that the CMBS hotel loan companies that are now delinquent also received PPP funds – and the industry is still seeing a 24%+ delinquency rate.

If one were to extrapolate this to WAL, it would indicate that about $500 million of hotel loans would be delinquent. To put this into perspective, its provision for credit losses increased $47 million in 1Q20 due to emerging risks related to the pandemic crisis. Driven by the 1Q20 provision add, it now has about $235 million in its entire loan loss reserve.

However, as a general rule, banks that grow rapidly when times are good are typically more at risk during a recession. More often than not, faster than peer loan growth is often achieved by taking more risk – or in WAL’s case, extending loans to a specialized lending class like hotels.

While spectators won’t know for another quarter how sound the bank’s underwriting practices really were, investors should take notice and realized that the CMBS hotel market continues to deteriorate month after month. WAL can continue to extend loan deferrals for a few months, but it is unlikely that the bank will get through this without having to meaningfully increase its provisioning levels in order to properly hedge against its currently very risky loan portfolio. As such, I would recommend not buying this dip.