Just over a year ago, I put out a bullish article on Turtle Beach Corporation (HEAR) and the shares are up about 79% since then, against a gain of about 8.6% for the S&P 500. Most of that gain has happened relatively recently, given that the shares are up dramatically since my article of about 3 months ago. I think a stock that’s trading at $18.50 is obviously a much more risky investment than that same stock when it’s trading for $10.30, so I thought I’d check in on the name. In particular, I want to see whether I should continue to hold the shares or whether I should sell. I’ll make this determination by looking at the financial history here and by looking at the stock as a thing distinct from the company. I’ve also placed a series of options trades along the way here, so those deserve commentary also.

For those who missed the title of this article, and skipped past the summary bullet points, I’ll come right to the point. I think this is generally a great business, but I think the shares are overpriced relative to fundamentals at the moment. I’ll be selling my shares at this point, and will revisit the name when they next publish financial results. That said, I think there’s another options trade that makes sense here, so I’ll review that also.

I think the financial history here is fairly impressive in many ways. Over the past six years, the company has grown sales at a CAGR of about 4%, and have grown from a loss position to consistent profitability. I also like the fact that the capital structure is very clean, with debt basically non existent at the moment. Debt reduction has been particularly pronounced between 2017 and now, with the figure moving from over $70 million to about $300,000 currently.

Also, I’ve been trying to view the risk inherent in certain names by looking at the size and timing of future cash obligations. The following, plucked directly from the pages of the latest 10-K, demonstrates that future contractual obligations are very light here.

Nothing’s perfect, though, and Turtle Beach is no exception. The first quarter of 2020 was very soft relative to the same period a year ago. In particular, revenue was over 20% lower, and net income absolutely collapsed, from a $3 million profit to a $3.5 million loss. More troubling in my estimation is the fact that there seemed no one-off events that drove this change. Net revenue declined just under 22%, and cost of revenue dropped by 19.5%. Selling and marketing, R&D, and general and administrative expenses were up 11%, 67% (!), and 23% respectively. Nothing on the horizon suggests to me that these increases were one-off events. Although one quarter does not a trend make, I’ll definitely be scrutinizing the financials very closely when the company next announces earnings. I also think investors should now insist on a large margin of safety on these shares in the form of a cheap stock price. 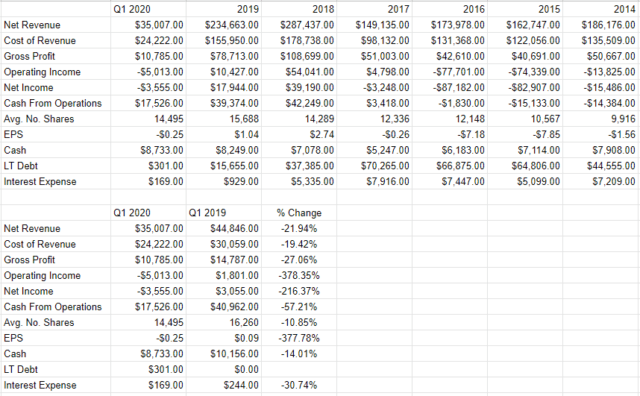 I’ve written it before and no doubt I’ll write it again. I think a great business can be a terrible investment at the wrong price, just as I think a mediocre business can be a great investment at the right price. The idea behind all of this is that in my opinion, we investors need to look past the business and judge the stock itself as a thing distinct from the underlying company. In my view, profits are made and fortunes are lost in the interactions between the stock and the company. The company’s profitability is obviously important, but it’s of secondary importance to how the market perceives that profitability. If the market is excessively optimistic about the future of the business, that’s bad in my estimation, and if the market is unduly pessimistic, that’s good.

I judge whether or not the market is pessimistic or not about a given company in a few ways, ranging from the simple to the more complex. On the simple side, I look at the ratio of stock price to some measure of economic value, like earnings, free cash flow and the like. I think low price to value ratios represent both reduced risk and enhanced returns. Cheap stocks are associated with lower risk because all of the bad news is already “priced in”, and any new bad news the company posts may not move the shares much lower. They are associated with higher returns in my view because shares climb dramatically when a company that was heretofore considered “dead money” offers a pleasant surprise. I think Turtle Beach itself is an example of this phenomenon at work, given how far the shares have moved from the times when the market seemed pessimistic about the shares.

The combination of potential slowdown in the business and much higher valuations is causing me to shift to neutral on this name. It’s also the case that a reasonable argument could be made that the shares are overpriced. It’s been a great run, but I must sell my shares this week.

Just because I don’t recommend buying the shares at the moment doesn’t mean that there’s nothing an investor can do at the moment. I think short puts offer a great alternative to stock ownership at this point. Before getting into the specifics, though, I should write about my own history of options trading on this stock.

In my opinion, there’s something off about writers who quote themselves. With that out of the way, allow my to quote my previous article on this name:

In my previous article, I recommended shorting the January 2020 put with a strike of $10. These were bid-asked at the time at $2.30-$2.70, so when they were put to me, I bought at a net price of $8.70. So I find myself in a situation where the shares put to me are up about 18%, while the shares I purchased at the time my article published are down slightly. In my view, this is a great reminder that the price an investor pays drives their returns. Also, I think it highlights the fact that it’s often far less risky to sell put options than to simply buy the stock.

I’ve done well with the stock, but I’ve done very well with the stocks that were “put” to me. In addition, as the shares continued to rise in price, the October puts with a strike of $8 that I recommended selling in my previous article have done well from my perspective also. Specifically, at the time, they were bid-asked at $.80-$2.20. At the moment, these are bid-asked at $.10-$.45. These trades should demonstrate that short puts are another great source of returns.

I like to try to repeat success, so I’m going to suggest selling more puts. At the moment, my current favorite is the January 2021 put with a strike of $12.50. These are currently bid-asked at $1.20-$1.90. That means that if an investor simply takes the bid here, and is subsequently exercised, they’ll be obliged to buy the stock at a net price of about $11.30, which is about 39% below the current price. If the shares remain above $12.50 over the next six months, the investor simply pockets the premia, which is obviously not much of a hardship. For these reasons, I consider this to be a “win-win” trade.

I really hope that you’re excited about the prospects of a “win-win” trade, dear reader, because it’s time for me to spoil the mood completely. The world is such that we humans must choose between a host of imperfect trade-offs. There is no “risk-free” option, and short puts are no different in this regard. We do our best to navigate the world by exchanging one pair of risk-reward trade-offs for another. For example, holding cash presents the risk of erosion of purchasing power via inflation and the reward of preserving capital at times of extreme volatility. The risk reward of stock ownership is obvious to readers on this forum.

I think the risks of put options are very similar to those associated with a long stock position. If the shares drop in price, the stockholder loses money, and the short put writer may be obliged to buy the stock. Thus, both long stock and short put investors typically want to see higher stock prices.

Puts are distinct from stocks in that some put writers don’t want to actually buy the stock – they simply want to collect premia. Such investors care more about maximizing their income and will, therefore, be less discriminating about which stock they sell puts on. These people don’t want to own the underlying security. I like my sleep far too much to play short puts in this way. I’m only willing to sell puts on companies I’m willing to buy at prices I’m willing to pay. For that reason, being exercised isn’t the hardship for me that it might be for many other put writers. My advice is that if you are considering this strategy yourself, you would be wise to only ever write puts on companies you’d be happy to own.

In my view, put writers take on risk, but they take on less risk (sometimes significantly less risk) than stock buyers in a critical way. Short put writers generate income simply for taking on the obligation to buy a business that they like at a price that they find attractive. This circumstance is objectively better than simply taking the prevailing market price. This is why I consider the risks of selling puts on a given day to be far lower than the risks associated with simply buying the stock on that day.

I’ll conclude this rather long discussion of risks by indulging my tendency toward tedious repetition, and I’ll use the trade I’m currently recommending as an example. An investor can choose to buy Turtle Beach today at a price of ~$18.40. Alternatively, they can generate a credit for their accounts immediately by selling put options that oblige them – under the worst possible circumstance – to buy the shares at a net price about 40% below today’s level. Buying the same asset at such a discount is the definition of lower risk, in my view.

I think this is a wonderful business, with many positives. The capital structure is one of the cleanest I’ve seen, and I like the fact that Turtle Beach has managed to grow from a loss to consistent profitability. That said, I’m concerned that the business may be slowing. In addition, the valuation has expanded dramatically in the teeth of this slowdown. That is a bad combination in my view, and for that reason I’m selling my shares. That said, I’m going to allow the latest batch of short puts to expire worthless, and I’m going to sell the ones described above. I think the options market presents investors with a win-win trade here, and I think investors would be wise to take advantage of the trade.

Disclosure: I am/we are long HEAR. I wrote this article myself, and it expresses my own opinions. I am not receiving compensation for it (other than from Seeking Alpha). I have no business relationship with any company whose stock is mentioned in this article.

Additional disclosure: Although I’m currently long, I’m about to sell. Additionally, I’ll be selling 10 of the January 2021 puts described in this article.