Online brokerage firms have been doing well as a group over the last few years, especially from a fundamental perspective. Three companies in the industry are set to report earnings next week, but I chose to focus on TD Ameritrade Holding (AMTD). TD will report fiscal third-quarter results after the closing bell on Tuesday. E*Trade Financial (ETFC) and Charles Schwab (SCHW) are both scheduled to report next week as well.

Analysts expect TD Ameritrade to earn $0.82 per share for the quarter, and that is down from the $1.04 the company reported in fiscal Q3 2019. One interesting note about the estimate is that it has been ratcheted up considerably in the last 90 days. Three months ago, the consensus estimate was for EPS of $0.61, so the current estimate is 34.4% higher than it was. The revenue is expected to come in at $1.38 billion, and that is down 7.2% from the same period last year.

Over the last three years, TD Ameritrade has averaged earnings growth of 38% per year, but earnings are expected to decline by 23% for 2020 as a whole. Second-quarter results showed an 8% decline in EPS compared to last year. Revenue has increased at a rate of 23% per year over the last three years, and it was up 2% in the second quarter. For the year, revenue is expected to decline by 10.3%.

The company’s management efficiency measurements are pretty strong, with a return on equity of 27.6% and a profit margin of 50.8%. As for current valuations, the stock is trading with a trailing P/E of 10.55 and a forward P/E of 16.16 – very reasonable levels.

From a personal perspective, I have an account with TD Ameritrade and I really like its Thinkorswim platform. But I am far more involved with the market than the average person. I have spoken to a number of friends lately that have gotten involved in the market in the last few months. On a broad level, that concerns me because most people that are just getting started don’t understand that stocks move in two directions – up and down. On a company-specific level, I am little concerned that big brokerages are going to lose clients to the likes of Robinhood and other trading platforms.

This pinching action could create a huge move in the stock eventually, but at this time, the two trend lines are pretty far apart. We could see the stock rally by 25% before it really has to deal with the downward sloped trend line. It would also have to break through its 52-week and 104-week moving averages to reach the trend line.

Conversely, the stock has just reversed higher from the selloff in June, and it looks like the weekly stochastic indicators will make a bullish crossover either this week or next. This suggests that the short-term momentum is to the upside.

If we step back a little, we see that the stock has been trending lower for over two years now, with the all-time high coming in just shy of $60 in June ’18. When the stock bottomed in March, it had dropped over 50% from that high.

Sentiment toward TD Ameritrade is Bearish and Growing More Pessimistic

Looking at the three main sentiment indicators that I use, investor sentiment toward TD Ameritrade is rather bearish and appears to be getting more pessimistic. There are 16 analysts covering the stock at this time, with only three “Buy” ratings but 13 “Hold” ratings. That gives us a buy percentage of 18.8%, and that is extremely low for a stock with the fundamentals of TD. Not only is the buy percentage low, but it has gotten lower in the last few months, as two analysts moved their ratings down to “Hold” from “Buy”. 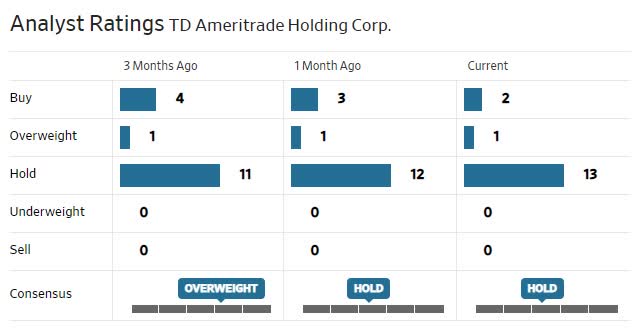 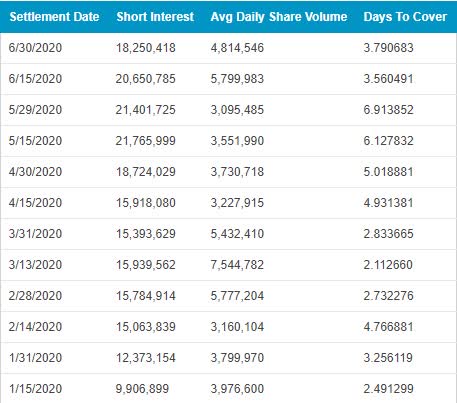 The put/call ratio is at 0.90, and that is in the normal range when compared to other stocks, but it is considerably higher than the 0.55 reading on April 22 when the company reported second-quarter results. I was a little surprised at the low open interest on both the puts and the calls considering how actively traded the stock is. There are 9,036 puts open and 10,027 calls open at this time. That includes contracts all the way out to next February, and the open interest represents less than two million shares of stock. The average daily trading volume is almost 5 million shares.

Overall, we see that all three sentiment indicators are more pessimistic than the average stock and all three seem to be moving toward a more bearish stance. From a contrarian perspective, this could be good news for shareholders as we head in to the earnings report. The more bearish investors and analysts are, the lower the expectations. If the company can report better-than-expected earnings, we could see the stock jump sharply.

I am reluctant to issue a long-term bullish stance on TD Ameritrade, and that is mainly due to the technical analysis. The downward trend in the stock that has gone on for over two years now is a concern. However, the fundamentals are good, but not great. The sentiment is extremely bearish, and that is a plus, in my book.

From a short-term perspective, because expectations seem to be so low, I can see the stock rallying after the earnings report. It could jump back up to the $47.50 level in the next few weeks, but then it is going to face several layers of resistance.

I can see buying TD for the short term and then playing it carefully if the stock gets up to the various resistance points. If the stock moves lower, look for the $35-36 area to act as support. If that support breaks, the stock could move all the way back down to $27.50, so be careful.

If you would like to learn more about protecting and growing your portfolio in all market environments, please consider joining The Hedged Alpha Strategy.

One or two option recommendations per month

A weekly update with my views on the market, events to keep an eye on, and updates on active recommendations