For an investor, it is always a great pleasure to find an almost perfect company that was previously overlooked. After carefully examining the fundamentals of Rollins, Inc. (NYSE:ROL), a pest and termite control firm, I can fairly conclude that it has an impressive financial performance. It has been incessantly growing over the previous decade, opportunistically utilizing acquisition opportunities in the highly fragmented industry. Though in 2020, growth is on pause, it will likely fully recuperate in 2021 and continue running on all cylinders with strong momentum in 2021-2024. But there is one essential flaw that mars the overall impression: an F Value Grade.

Thanks to continuous acquisitions, in the 2010s, Rollins expanded and cemented its market share in the U.S. and fortified its footprint overseas. The most recent deal was announced just a few days ago: one of Rollins’ Australian subsidiaries acquired Adams Pest Control Pty Ltd. ROL has international franchises in Mexico, the Caribbean, Europe, etc. Its brand portfolio is versatile and includes such names as Orkin, perhaps the most recognizable brand, Waltham Services, Trutech, PermaTreat, and a few others. ROL serves both residential and commercial customers and has only one reporting segment.

Its primary competitors are Rentokil Initial (OTCPK:RTOKY), Ecolab (NYSE:ECL), Terminix, and Anticimex; only the first two are public, which complicates peer comparison. Another issue worth highlighting is that Ecolab and Rentokil have more complicated portfolio structures with revenue streams other than the pest control. Ecolab does not report Pest Elimination results separately; instead it includes them into the Others segment. The segment was responsible for only 6% of the total revenue in 2019 (see pages 3 and 7 of the annual report). At the same time, operating in 81 countries, Rentokil Initial generates 64% of its revenues from pest control (£1.7 billion in 2019), which makes it more akin to ROL.

Discussing risk factors in the annual report (see page 6), Rollins acknowledged that “Economic conditions may adversely affect our business.” However, I would not say its 2020 revenue is about to drop in double digits. And there are a few reasons for that. Pest and termite control is an essential service. Termites are powerful value-destroyers that can cause humongous damage and even jeopardize the structural integrity of a house. According to Michael F. Potter of the University of Kentucky College of Agriculture, the damage termites make in one year can be equal to billions of dollars. Obviously, these dangerous wood-hungry insects have been inhabiting Earth since the early Cretaceous, and they are not going to evaporate during the economic downcycle and stop fraying homeowners’ nerves. So, I reckon that regarding immunity to the recessions, Rollins is much more protected than, let’s say, Pentair (NYSE:PNR), another company I cover, which dominates the North American swimming pool equipment market. Pests jeopardize family health and safety and dent quality of life. Hence, spending on pest control has much higher priority than, for instance, leisure activities or remodeling, but lower priority than utilities, food, and medical. What is more, for commercial customers that brought around 38% of revenue in 2019, pest and termite control is also not an activity that can be deferred ad infinitum without risks to face a deterioration of reputation and other apparent repercussions like hefty fines (see this example from the UK), especially in the cases of food services and hospitality companies.

The first-quarter results were strong, as revenue rose 13.7% and FCF reached $82.3 million, but full-year figures will likely be flat. Analysts are predicting the 2020 revenue to increase by only 1%; the return to more robust growth is possible in 2021.

A pest control company cannot build a new refinery, acquire exploration rights, or build next foundry to secure future revenue expansion. The best strategy that Rollins has been implementing is to buy smaller players, thus becoming a dominant force in the market. Another growth stimulus is regular price increases that take place in July (see page 16 of the 2019 Form 10-K), but in 2019, the program helped to increase sales by only 1%.

Bolstered by a string of opportunistic acquisitions (dozens were closed in 2018-2019), its sales had been growing with a 7.74% CAGR in the previous five years. YoY growth is around 12.6%. Moreover, 2019 was the 22nd consecutive year of the top-line expansion. In 2019, around 80% of the pest control revenue was recurring, precisely like in 2018. It also expanded its profit margin a bit from 9.2% in 2014 to 9.8% in the last 12 months. All these achievements are overall great, but for me, as a cash flow-focused investor, the fact of the paramount importance is that since 2014, net CFFO and FCF have increased ~2x. In the past, organic FCF had been close or above accounting profit, which indicates perfect earnings quality. So, gradually and smoothly growing organic FCF (which is barely achievable in the cases of, for instance, most oil & gas and chemical companies I regularly cover) is another unquestionable merit of the company.

The flip side is that Rollins’ organic free cash flows tell only a part of its growth story. Though during most of the 2010s its operating cash flow was surfeit enough to more than adequately cover both organic (capital expenditures) and inorganic expansion, in 2019 and LTM, ROL’s acquisition appetite increased. During 2019, it acquired Clark Pest Control and a few other small- and mid-sized firms using $430.6 million, which was way above net operating cash flow. Not coincidentally, ROL used borrowed funds. Before Q2 2019, it was completely debt-free. Some investors might be against using the debt, but I strongly endorse Rollins’ decision, especially considering that the balance sheet remains robust: its Debt/Equity equals only 40%, which is adequate; net debt/Net CFFO is just 0.7x, while it also has no sizeable near-term maturities (see page 19 for details on contractual obligations).

Rollins’ has superb capital efficiency that fairly impressed me. According to my calculations, its Cash Return on Equity (Net CFFO/Average Equity) touched 39% in the last twelve months. It is an unprecedented result; I rate companies that have above 20% CROE as highly efficient. Next, its Cash Return on Total Capital (Net CFFO/Average Total Capital, or the sum of the Total Debt and Equity) is also stupendous, equals to 30%. FCF ROE (Organic FCF to Equity/Average Equity) is 39%, while FCF CROTC (Organic FCFE/Average Total Capital) is 28%.

So, that is fully explainable why the market values Rollins so generously.

ROL is a great company, but on a relative valuation basis, ROL is much more expensive even than Microsoft (MSFT), as it has a 35.9x EV/EBITDA. Put another way, the company that is forecast to increase sales with a mid-single-digit rate is more expensive than the tech giant which is anticipated to expand with double-digit rates.

For a broader context, London-listed Rentokil Initial, the above-mentioned Rollins’ competitor which has a much less impressive revenue growth story, is trading with the Enterprise Value/2019 pro forma EBITDA ratio of only ~18.1x. 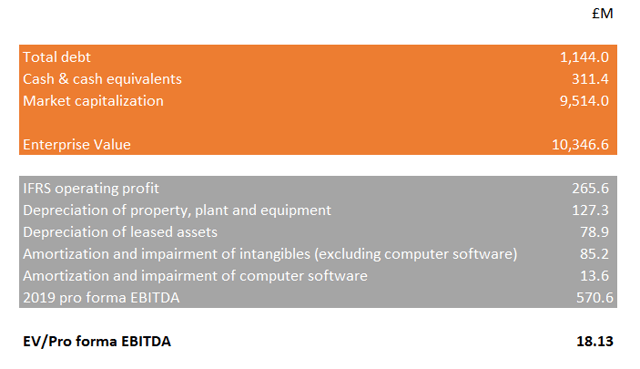 Created by the author using the data from the annual report. See page 160 for details on the non-cash items. We cannot compute a more up-to-date multiple, as the LSE-listed companies report semiannually.

To conclude, I would not say Rollins will trade with the single-digit EV/EBITDA in the near term. There is simply no such potent downside catalyst that can shatter its elevated valuation. Even the coronavirus managed to push it only to slightly below 27x. So, EV/EBITDA below 30x might be a reasonable entry point. Of course, inflated multiples-averse value investors should stay on the sidelines.

The market richly rewarded Rollins for the strong sales momentum and impressive FCF growth, as during the previous five years, its share price has climbed more than 138% higher.

As multiples had been creeping higher, the dividend yield remained mediocre despite DPS increases backed by FCF growth; in April, the dividend cut as a preemptive step to address the uncertainty amid the pandemic was an unpleasant surprise.

To sum up, Rollins is an exceedingly efficient company. But valuation is too inflated. Moreover, there is uncertainty regarding the potential sale of the company. So, consider all these facts carefully before making an investment decision.