From 2013 until 2019, the robotics industry installations CAGR was 15.4%. I have analyzed four robotics companies since May of this year, and I am only bullish on one of them. My goal with this analysis is to find out which companies were able to create shareholder value from this double-digit growth of robotics installations. This analysis will only cover the period from 2013 until 2019. In this analysis, I will cover some of the dynamics of the Robotics Industry that concerns me as an investor.

The Dynamics Of The Robotics Industry

I am enthused to see that the food and beverage industry is responsible for 11% of all installations. This industry has the lowest CAGR, but its robotics orders are the most stable of all client industries. I believe that the food and beverage industry has room for more automation. I have visited many food production companies, and they still heavily rely on simple machines and manual labor. This industry could replace any loss of demand that might occur in the automotive industry, which is why I believe it is important. 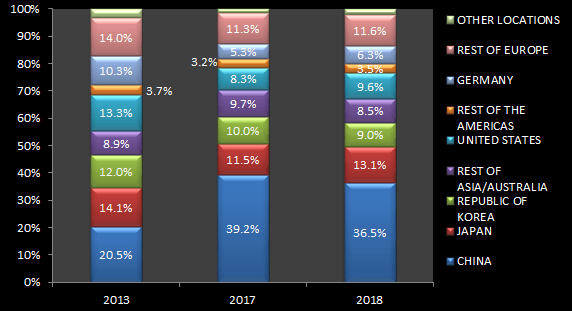 When I first analyzed robotics installations by region, I only had the 2017 and 2018 data. A couple of days ago, I found IFR’s 2014 executive summary. Now, it is clear to me that the robotics industry has become too reliant on China. Almost 35% of all robotics installations are in China, and the Asian market (including China) accounts for 67% of all installations. The reason this is a problem is that the United States and China entered into a trade war that never seems to end. As long as this trade war continues, I believe the robotics industry will not grow at its full potential.

Industry growth is important, and I believe that the robotics industry has growth potential, but many times companies are not able to produce shareholder value while its industry is booming. In this section, I will attempt to see which company took advantage of the double-digit industry growth. 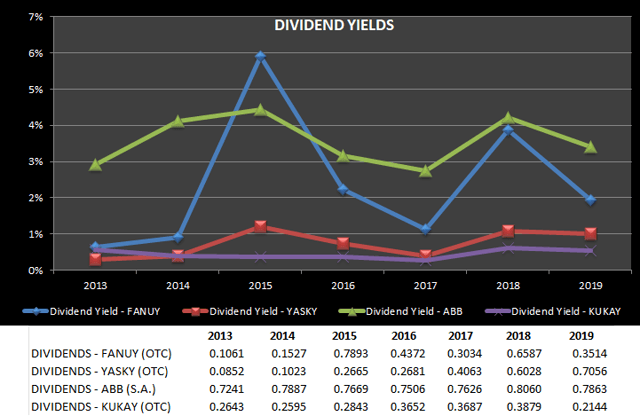 Figure 4 takes into account the following assumptions. The first assumption is that an investor purchased a share of each company on the 1st trading day of 2013. Next, the investor sold this share on the last day of 2019. I included in the return all of the dividends paid throughout the seven-year analysis period, and I assumed the dividends earned nothing after being received. Yaskawa Electric Corporation (OTCPK:YASKY) had the highest return of the group and outperformed its industry. A company that exceeds its industry is the type of company that I want to give my money. Fanuc (OTCPK:FANUY), ABB, and KUKA grew shareholders’ wealth at a CAGR less than that of the industry.

All three of the underperforming companies are reorganizing their corporate structure in hopes of decreasing expenses and improving operations. After analyzing these four companies, there is one key element that I firmly believe has allowed Yaskawa to outperform, which is their long-term planning. Yaskawa plans what it will be doing over the next ten years, and they typically stick to the plan.

If you like what you read, please “Follow” me via Seeking Alpha. I typically only cover the Brazilian markets, the Robotics Industry, and the Food Industry.

Disclosure: I am/we are long YASKY. I wrote this article myself, and it expresses my own opinions. I am not receiving compensation for it (other than from Seeking Alpha). I have no business relationship with any company whose stock is mentioned in this article.