The Idaho gold mining industry is just down the road from Nevada, which happens to be the number one gold-producing state in the United States. Part of Idaho lies in the Great Basin, which is the same geological structure where the largest Nevada gold discoveries have been found.

Some people would say Idaho today is where Nevada was 30 years ago when it comes to gold mining. Idaho, at the moment, seems to be a very business-friendly place for the mining industry. That is demonstrated by the number of exciting exploration and development projects being advanced in the state.

There are currently six (seven if you count Hecla Mining’s (NYSE:HL) silver mine) public companies that either operate gold mines in Idaho or are in the development phase. If I am missing any from the list, please let me know in the comments so I can include them next year.

Source: Created by the Author 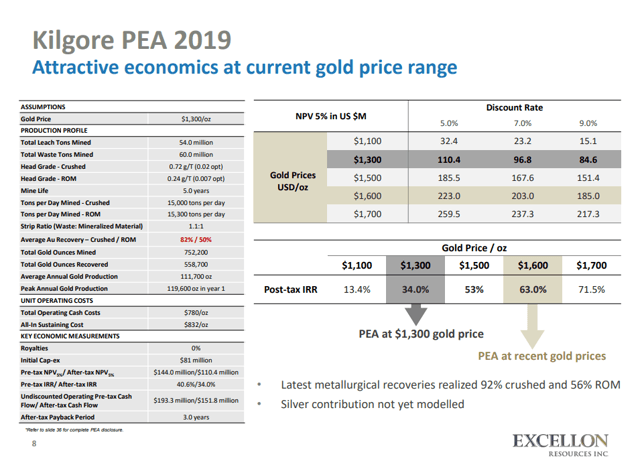 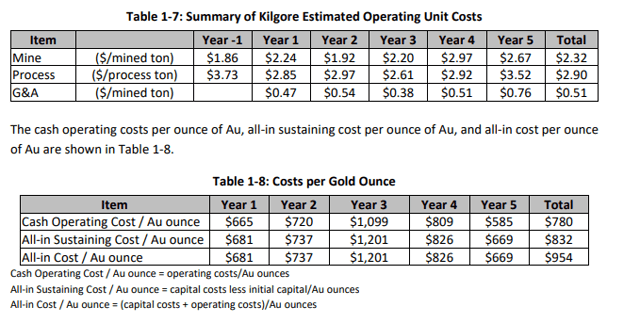 Idaho Champion is a company that is solely focused on projects in Idaho. Their flagship project is the Baner project, but they also have the Champagne Project and the Cobalt project in Idaho. They currently have a market cap of only $13 million.

Midas Gold is solely focused on the Stibnite Gold Project located 10 miles east of Yellow Pine, Idaho. Midas currently has a market cap of about $250 million. The Stibnite Project is a gold, silver, and antimony resource project. Antimony is an element on the periodic table that is commonly used in batteries.

The project is currently stuck in the permitting phase. 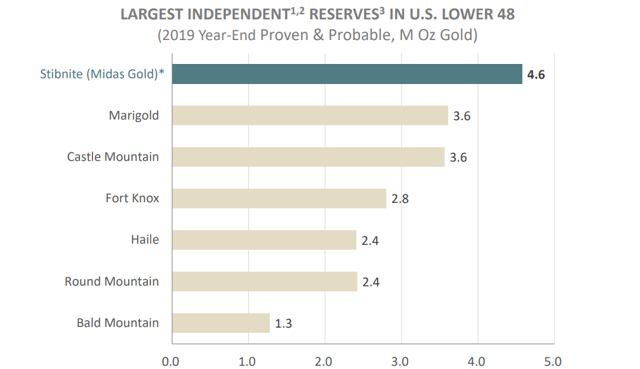 BeMetals is the operator of the polymetallic South Mountain Project, which is 70 miles southwest of Boise, Idaho. The project has been mined for decades leading up to 1960. Since then, its infrastructure and “underground workings” have been well-maintained. Historical records indicate about 53 thousand tons have been mined with average grades of “14.5 percent zinc, 363.42 g/t silver, 1.98 g/t gold, 2.4 percent lead, and 1.4 percent copper.” Granted, this was only for 53 thousand tons, but in today’s terms, those are very attractive average grades. The project is currently in the pre-development phase.

Even though BeMetals has what appears to be a good project, one of the best things about the company is that one of its founding members and current directors is Clive Johnson. Mr. Johnson also founded B2Gold (BTG), which today is valued at over a $5 billion market cap.

Here are some of the highlights from the South Mountain 2019 drilling program results.

Integra Resources is the operator of the DeLamar project, 100 miles from Boise in southwestern Idaho. Integra currently has a market cap of $72 million. Historically, the mine was owned by Kinross Gold (NYSE:KGC) until it was closed in 1998 thanks to low precious metals prices. During its years in production, it “produced 1.6 million ounces of gold and 100 million ounces of silver.”

Below is a table showing the reserves and resources at the DeLamar project (and next door Florida Mountain project). 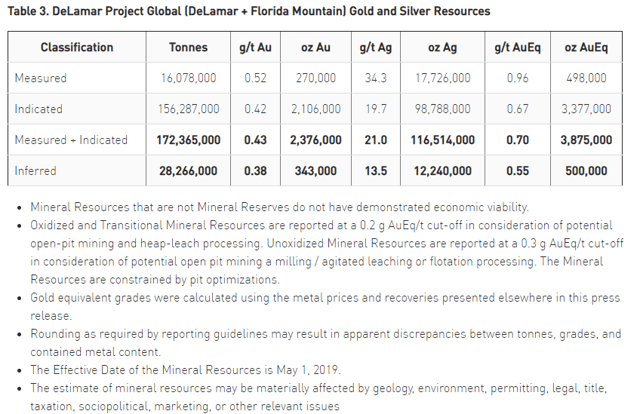 During 2020, the company’s plan is to continue to implement further exploration and development. This includes environmental studies and engineering work. By the second half of 2021, they hope to have completed the pre-feasibility study and have a plan of operations in place.

I thought this slide from their most recent presentation demonstrated well the path that Integra is potentially on. 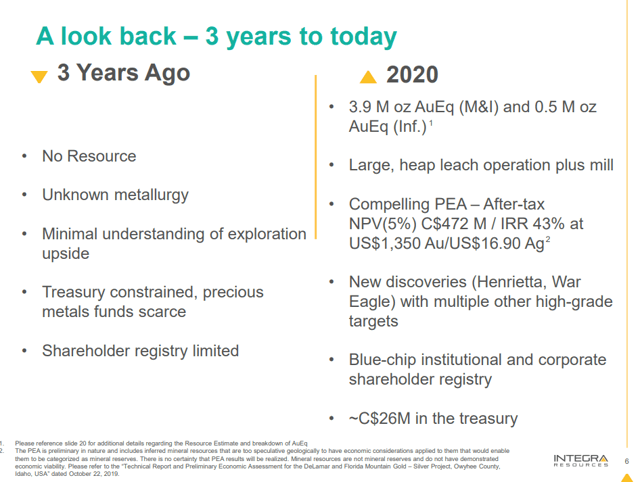 It is an exciting time to be investing in Idaho’s potential gold and silver production. Although there were no producing gold mines in this list, there are some exciting prospects. I think the thing that strikes me is that there are a few names in this list that will potentially create a substantial amount of value for shareholders in the coming years.

The challenge of investing in these companies is that their timelines are unknown. To the extent that they are “known,” there’s plenty that can go wrong or that can delay the project. In the investment world, having certainty around the time until cash flows begin, is valuable. However, for patient investors, several companies in this list have the potential to grow into the net present value of their projects.

There were four in particular that grabbed my attention.

The beautiful thing about each of these companies is that they are either single project companies or have multiple small projects that make the company easy to value. When you invest in these companies, you can invest knowing what you are getting. For the four companies in the bullet points above, it’s likely only a matter of time before they grow into their respective projects’ net present values.

We’ve covered Idaho, Nevada, and Alaska in our trip around the United States, examining each state’s gold mining industry. Idaho, although not as developed as Nevada or Alaska, promises to be an up and comer in the industry in the years ahead.

If I left any company off of the list, please let me know in the comments.

Disclosure: I am/we are long BTG. I wrote this article myself, and it expresses my own opinions. I am not receiving compensation for it (other than from Seeking Alpha). I have no business relationship with any company whose stock is mentioned in this article.

Additional disclosure: The author of this article is not a Registered Investment Advisor or Financial Planner. This writing is for informational purposes only. It does not constitute an offer to sell, a solicitation to buy, or a recommendation regarding any securities transaction. The information contained in this writing should not be construed as financial or investment advice on any subject matter. The author of this article expressly disclaims all liability in respect to actions taken based on any or all of the information on this writing.