With stock benchmarks trading near record highs in each of their respective valuations, many investors must now choose between bonds and precious metals as a strategy to protect against potential declines in equities markets. In this context, bearish criticisms against the SPDR Gold Trust ETF (NYSEARCA:GLD) typically centered around the ETF’s inability to produce yield. However, these limited arguments seem even more ridiculous while yields on the 10-year Treasury seem to be holding within striking distance of the record lows (of 0.569%) that were established on March 9th, 2020. As a result, conservative investors looking for safe-haven protection in troubled markets should look to GLD as a high-liquidity alternative that is capable of generating sustainable gains over the next few quarters.

Although we have seen rallies in the SPDR Gold Trust for most of this year, there have been periods of decline and sideways trading activity must also be noted in the analysis. Of course, this year’s major drop in GLD began in March after the initial surge in coronavirus cases became widely known. Eventually, these declines were followed by a sharp rally in GLD valuations that extended until the middle of April and then sideways trading activity that forced a period of consolidation in the market that extended until the early parts of June.

For active traders, this type of activity should not come as a total surprise because periods of extreme two-way volatility are often followed by a final period of consolidation once the dust settles and the majority of the market decides on the next trend direction. However, a closer look at GLD’s shorter-term time frames reveals a more interesting perspective in terms of what might occur in the weeks ahead.

In June, the second wave of the rally in GLD finally started to gain traction. When this occurred, a definitive rally through resistance near $164.90 confirmed a resumption of the prior uptrend that began after bearish investors sent the fund to its March 16th lows (at $136.12). Of course, it would be difficult for investors to dismiss these moves as a temporary reaction to volatile markets. Ultimately, these gains in GLD should be characterized as measured moves that occurred after a period of consolidation. In other words, investors were able to benefit from a period of “cool reflection” after witnessing the initial surge in COVID-19 infections on a global scale.

For GLD, the way these trends have unfolded brings added validity to the underlying strength of the recent rally and it suggests that there are likely enough buyers left in the market for the ETF to continue moving higher. In many cases, this comparatively strong level of bullish sentiment has taken many traders by surprise. GLD is currently holding on to YTD gains of nearly 20% even while the S&P 500 is still trading in negative territory over the same period of time (at -0.19%). However, it’s clear that evidence of a potential rally in the SPDR Gold Trust has been visible for an extended period of time and this is why we have been calling for new record highs in the ETF for more than two months. 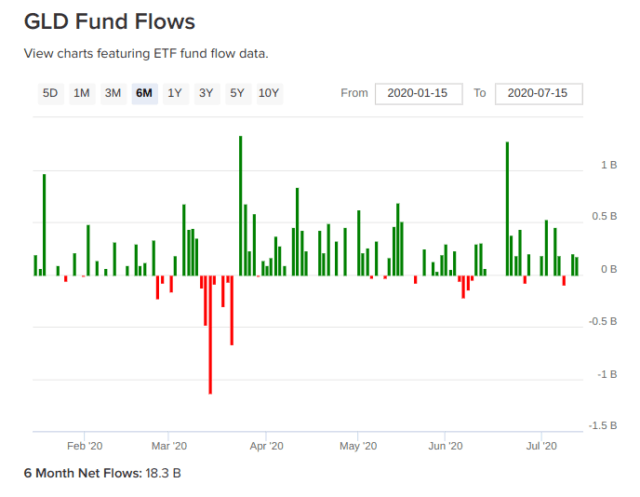 Over the last six months, GLD has benefited from net flows of $18.3 billion and periods of weakness for the fund have actually been quite limited in nature. GLD selling pressure was evident for a significant portion of the tumultuous March trading period and during a rout of profit taking that occurred during the early parts of June. However, it’s clear that the market’s dominant transactional activity is indicative of a strong bullish trend because the fund’s net flows have managed to hold well above their long-term averages.

Going forward, it seems like that many investors will be wondering whether there are enough buyers left in the market to continue propelling gains. But there are a few factors that should be considered here with equities markets trading at elevated levels and earnings season expected to reveal widespread disappointments in corporate profitability.

Central bank buying activity looks as though it is more than capable of accomplishing this task as precious metals asset purchases from the People’s Bank of China (PBoC), the Central Bank of the Russian Federation, and the Central Bank of the Republic of Turkey continue to surge higher. If individual investors are seen to be taking cues from these important central bank activities, it should not be much of a surprise if sentiment remains bullish and market valuations in GLD overcome previous record highs. 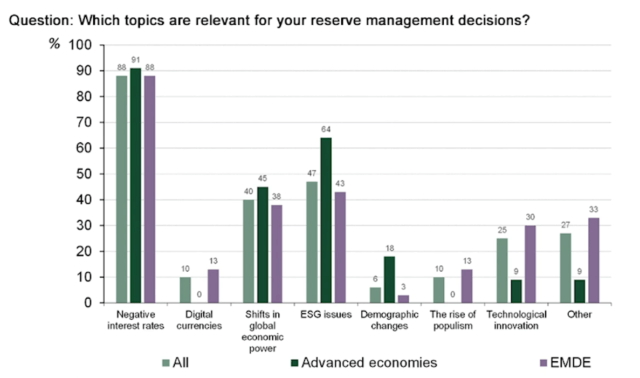 At this stage, it looks as though it is unlikely that recent trends in central bank gold purchases will begin slowing in momentum anytime soon. Recent surveys from the World Gold Council (WGC) asked central bankers around the world about which issues were most important when making the decision to buy or sell precious metals assets. By a wide margin, the top answer reflected concerns about negative interest rates around the world and the destruction of value in fiat currency reserves. Issues like changing demographics and innovation in technology can almost be viewed as an afterthought (according to the WGC survey), so the major concerns about central bankers seem to revolve around an unhealthy macroeconomic framework that has only been made worse by the anticipated effects of the COVID-19 pandemic.

For these reasons, valuations in GLD look poised to reach new record highs as global uncertainties in this macroeconomic environment remain apparent. Central bank buying activities continue to support the outlook for precious metals instruments while weakness in the 10-year Treasury has limited the number of safe haven alternatives available in the market. Overall, this is a scenario that puts GLD in a strong position to build on its yearly gains, even while optimism in the equities market remains elevated. After a period of consolidation in the fund’s valuations, bullish investors have initiated a second wave of buying activity that could send the ETF to new record highs before the end of 2020.

Thank you for reading.

Now, it’s time to make your voice heard. Reader interaction is the most important part of the investment learning process! Comments are highly encouraged. We look forward to reading your viewpoints.