Freeport-McMoRan (FCX) released its Q2 2020 financial results. Back in April, the company announced several measures focused on reducing costs and preserving cash. The cost-cutting measures were successful, while the copper prices recovered much quicker than expected. This, along with a smooth Grasberg underground ramp-up, resulted in very good quarterly results. Moreover, if the current metals prices prevail and the coronavirus doesn’t cause any further major disruptions, very good results should be recorded also over the coming quarters.

In Q2, Freeport produced 767 million lb copper, 191,000 toz gold, and 19 million lb molybdenum. The copper production increased by 4.9% and gold production increased by 22.4% quarter over quarter. The molybdenum production remained almost unchanged. The production volumes increased despite the negative impacts of the coronavirus pandemics. This success is attributable to the Grasberg underground ramp-up. While the Indonesian mine operated at a capacity of 37,500 tpd in Q1, it increased to 54,800 tpd in Q2. However, at the end of June, the throughput rate of 70,000 tpd was reached. Grasberg’s production should almost double in 2021 (to 1.4 million toz gold and 1.4 billion lb copper).

Freeport’s production should keep on growing over the coming quarters (barring any other major coronavirus-related production disruptions), as the Grasberg ramp-up will continue and the Lone Star mine with an annual production capacity of 200 million lb copper should start production in H2 2020. It is also expected that the Chino mine should be restarted and the Cerro Verde mine should return to the 350,000 tpd throughput rate in H2 2020 (as of the end of June, it was at 80% of its 2019 throughput rates).

Although the production growth is nice, even more positive is the decline in production costs. While in Q1 2020 the unit net cash costs equaled $1.9/lb copper, in Q2 they declined to $1.47/lb or by 22%. It is the lowest level since Q3 2018. The decline is attributable to Grasberg, where the costs declined from $1.31/lb to $0.56/lb. The North American and South American operations recorded an increase in production costs.

Freeport’s cash position has worsened in Q2. The volume of cash, cash equivalents, and short-term investments declined from $1.715 billion to $1.465 billion. However, there is also $3.5 billion available undrawn under the credit facility, which means that Freeport is well-funded. Although the total debt declined by $160 million in comparison to Q1, the net debt increased to $8.449 billion. However, as indicated by Freeport’s CEO during the earnings call, Freeport wants to use the significantly improved cash flows, expected in H2 2020 and in 2021, to reduce the debt. What is positive about Freeport’s debt, is its very favorable term structure. Only $300 million matures next year and $1.3 billion in 2022. The majority of debt ($5.5 billion) matures only after 2025.

Besides the positive news from Indonesia, related to the Grasberg mine ramp-up, there was also some news regarding the delay of the Gresik smelter development. Due to the coronavirus, the smelter won’t be built by December 2023, as originally projected. Freeport is negotiating a new schedule with the Indonesian government. On the other hand, very positive news came from Arizona. The Lone Star mine was developed on time and below budget, and its commissioning is underway. Moreover, scenarios of its expansion are being considered.

At a flat gold price of $1,800/toz, a molybdenum price of $7/lb, and a copper price of $2.75/lb, Freeport expects to generate an average annual EBITDA of approximately $6 billion and operating cash flow of nearly $4 billion in 2021 and 2022. However, despite the positive outlook, Freeport is cautious and doesn’t rush to re-establish the suspended dividends. According to its CFO Kathleen Quirk:

Regarding financial policy, as we’ve covered throughout this call, we remain focused on safeguarding our people and our business, and maintain strong liquidity and balance sheet strength as we manage through uncertainty during the pandemic. As previously reported, our Board has indicated it does not expect to declare dividends in 2020, but this will be evaluated on a regular basis. And as we successfully execute these plans in 2021, we expect to be in a much stronger position with increased cash flows, enhanced flexibility to consider shareholder returns.

The decision to keep dividends suspended may disappoint some investors; however, given the current economic and pandemic conditions around the world, it is probably a good step. 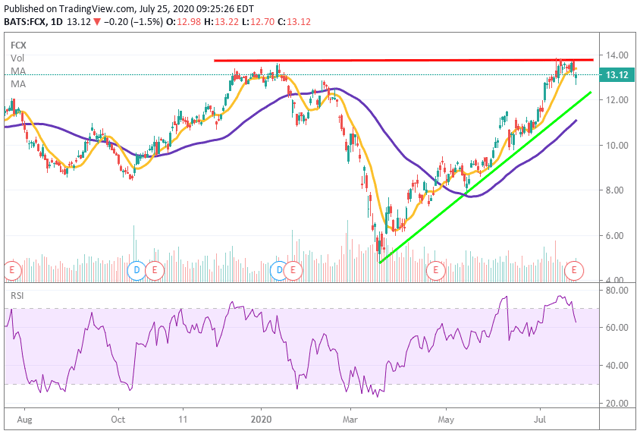 The technical analysis shows that Freeport’s shares just failed to break an important resistance level near $14. There were several attempts over the last two weeks, but the resistance that dates back to late 2019/early 2020 resisted. Moreover, the RSI was in the overbought territory for several weeks and it declined back below 70 now. It is a bearish signal. Freeport’s shares need some support from copper prices to break to the upside. However, the copper price itself is stuck in the $2.9-3/lb range right now. If a wider correction begins, Freeport’s shares should test the upwards trend line. If it doesn’t hold, some support should be found in the $10.5-11 area.

Disclosure: I/we have no positions in any stocks mentioned, but may initiate a long position in FCX over the next 72 hours. I wrote this article myself, and it expresses my own opinions. I am not receiving compensation for it (other than from Seeking Alpha). I have no business relationship with any company whose stock is mentioned in this article.