The Phoenix-based Freeport-McMoRan (FCX) is the world’s biggest publicly traded copper company. The miner is also producing a significant amount of gold and molybdenum as secondary metal products. On July 6, 2020, the company released a production update for the second quarter of 2020.

This article will analyze the production update and what to expect for the following second-quarter results.

The investment thesis is not very clear this year and even next year, especially with the dismal state of the world economy. However, the company is signaling a better outlook for the second quarter of 2020 and should do well in 2021 when Grasberg underground ramp-up is finally completed and running.

Below is the production per mine and per metals that the company indicated in the first quarter of 2020.

One of the main projects is the underground ramp-up at Grasberg mine, located in Papua, Indonesia. Grasberg mine is the second-largest copper mine in the world, but it also provides the majority of the company’s gold output. According to FCX website:

FCX has a 48.76 percent interest in PT-FI and manages its mining operations. PT-FI’s results are consolidated in FCX’s financial statements.

During fourth-quarter 2019, PT-FI completed mining the final phase of the Grasberg open pit and continues to achieve important milestones in ramping-up production of large-scale quantities of copper and gold from its significant underground ore bodies. 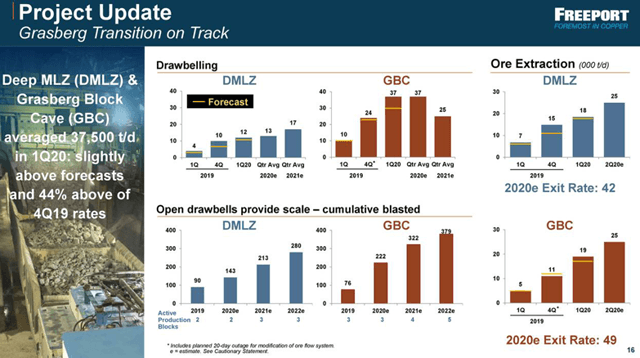 One of the primary negative arguments that could play against a long-term investment is that the company has stopped paying a dividend for the time being. Conversely, one positive is that copper price is now projected to be more bullish in H2 2020.

In a new report, Fitch analysts are revising up their 2020 copper price forecast to $5,900/tonne from $5,700/tonne as they now expect increased stimulus from the Chinese government to lift prices higher over the back half of the year.

Also, coronavirus cases are mounting in Chile, and are disrupting the Country’s mining industry, pushing the copper prices to six-month high. The connection is evident when we understand that Chile accounts for 25% of the total production of copper in the world.

Chile’s state-run Codelco says 2,433 workers have been diagnosed with the disease and it has temporarily halted construction on a new level at its flagship El Teniente mine.

With the risk of Chilean supply disruptions rising, “suddenly a 2020 copper deficit is not beyond the realms of possibility,” says BMO Capital’s Colin Hamilton.

Thus, the investing idea that I have indicated in the previous quarter has changed again. I still consider FCX as a contrarian after copper-related stocks have taken some severe beating earlier. However, the long-term vision is changing from negative to neutral/positive now.

It is perhaps the right time to accumulate the stock again on any weakness from here. Meanwhile, I do not see the stock rising exponentially. In contrast, I see some signs of support, and I recommend trading the short term using about 30% to 40% of your long position to take advantage of the volatility that will be high in H2 2020.

The company indicated that the revised operating plans were successfully implemented with costs and CapEx in line with guidance. Individually, the Lone Star mine is now completed and estimated to produce about 200 million pounds of copper per year starting in the H2 2020.

The Cerro Verde mine operations in Peru have been restored during the second quarter. In the press release, the company said:

FCX has continued to operate El Abra in Chile during the second quarter, but the increase in coronavirus cases may affect the mine severely.

The company said that the ramp-up of underground production at the Grasberg continues as-planned.

PT Freeport Indonesia (FCX owns 48.76%) anticipates its 2021 copper and gold production to be about 1.4 billion pounds of copper and 1.4 million ounces of gold. It is a big jump from the projected 2020 levels.

Finally, the company has indicated that second-quarter 2020 consolidated Copper and Gold sales will be above target.

Also, On June 30, 2020, FCX had no amounts drawn under its $3.5 billion revolving credit facility. Total consolidated debt is estimated to approximate $9.9 billion, and consolidated cash is expected to be approximately $1.5 billion.

Freeport-McMoRan is presenting a good case for investors who can look at the distant future and see an economy post-COVID-19, which has recovered plainly. Yes, the stock has already corrected mostly since March’s low, which looks like a rare opportunity for the ones who dared to invest in these dark moments. Backward insight is always 100%.

However, despite this optimism’s boots that have revitalized the market recently, it is only a beautiful facade, newly painted, which is only hiding a desolate economic landscape in search of direction. For one-step upward, it will be another one downward, maintaining a fragile balance. Thus, it is vital to cut expectations in terms of revenues and outlook to a three month horizon at the most. While building a small long-term position on weakness, I think FCX should be mainly traded short term based on technical analysis and copper price outlook. 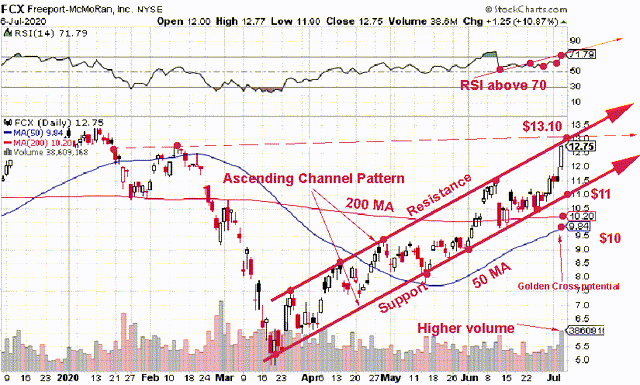 FCX is forming a clear ascending channel pattern with line resistance at $13.10 and line support at $11.

Based on the RSI (14), the volume and the pattern it seems an excellent time to take the profit off the table, around 50% seems right. A good entry accumulation is $10.20 – $10, which is the 50MA/200MA, which means a potential support breakout of the pattern.

Depending on the future price of copper and gold, FCX may eventually cross the support and finally retest $8.50 – $8, but it is not very likely. Conversely, assuming a bullish copper price going forward, FCX may continue climbing within the pattern with a potential top at $15.

Author’s note: If you find value in this article and would like to encourage such continued efforts, please click the “Like” button below as a vote of support. Thanks!

Join my “Gold and Oil Corner” today, and discuss ideas and strategies freely in my private chat room. Click here to subscribe now.

You will have access to 57+ stocks at your fingertips with my exclusive Fun Trading’s stock tracker. Do not be alone and enjoy an honest exchange with a veteran trader with more than thirty years of experience.

“It’s not only moving that creates new starting points. Sometimes all it takes is a subtle shift in perspective,” Kristin Armstrong.

Fun Trading has been writing since 2014, and you will have total access to his 1,988 articles and counting.