Evolution Mining (OTCPK:CAHPF) released its Q4 2020 quarterly report (Evolution’s financial Q4 is calendar Q2). As the company follows the Australian regulations and the financial results haven’t been released yet, the report doesn’t include some important numbers like net income or revenues. However, based on the released financial indicators, Evolution had a very good quarter. And based on the information about its recent exploration successes, the outlook for the future of the company also looks good.

The cash costs declined from $505/toz gold in Q3 to $500/toz gold in Q4. However, due to higher sustaining CAPEX, the AISC increased to $715/toz gold, or by 9.7%. As a result, the AISC reached the highest level in more than 2.5 years. Also here, the Red Lake mine has a major impact, as it is Evolution’s highest-cost operation by far. While Red Lake recorded AISC of $1,277/toz, the second-highest cost mine, Mt. Carlton, recorded AISC of only $870/toz. However, Evolution’s aim is to push Red Lake’s costs substantially lower, below $1,000/toz gold.

Due to the robust cash flows, Evolution’s cash position improved rapidly, from $107 million as of the end of Q3 to $245.5 million as of the end of Q4. The total debt increased only slightly, from $359.9 million to $374.5 million. As a result, the net debt decreased by an impressive 49% to $129 million. One more quarter like this and Evolution’s net debt will turn into negative numbers, just like before the Red Lake mine acquisition.

Especially positive is the news from the Red Lake mine. Evolution completed its acquisition from Newmont (NEM) for $375 million only on April 1. Its aim is to optimize the mining operations, reduce costs below $1,000/toz gold, and elevate gold production to the 200,000 toz per year level. And according to Evolution, the turnaround is going better than expected:

A workforce restructure took place in June, reducing the number of full-time employees by 114 to 740 people. Underground development rates continue to ramp up with 1,036 metres achieved in the month of June 2020. Evolution’s transformation plan is ahead of expectations to restore production to above 200,000 ounces per annum at an AISC of less than US$1,000 per ounce.

Also, the exploration at Red Lake is progressing well. The best results came from the Cochenour zone, where 6.09 meters grading 18.86 g/t gold, or 4.64 meters grading 22.1 g/t gold, were drilled.

Some great holes were drilled also at Cowal. The best intersections include 5 g/t gold over 94 meters or 19 g/t gold over 33 meters. Evolution recently released an updated resource estimate and a maiden reserves estimate for Cowal Underground. The inferred and indicated resources contain 2.912 million toz gold, including reserves of 804,000 toz gold. A PFS for the Cowal Underground mine is underway.

On June 4, Evolution announced the sale of its Cracow mine to Aeris Resources (OTC:ARSRF) for A$75 million ($53 million) and a contingent consideration worth up to A$50 million ($36 million). The transaction was completed on July 1. In Q4, the Cracow mine produced 23,747 toz gold at an AISC of $716/toz. The mine is nearing the end of its mine life. As of the end of 2019, its resources contained 345,000 toz gold (including reserves) and its reserves contained 114,000 toz gold. This means that the current reserves should be depleted sometime during Q3 or Q4 2021. However, Aeris believes that an aggressive drill campaign may prolong the mine life substantially. 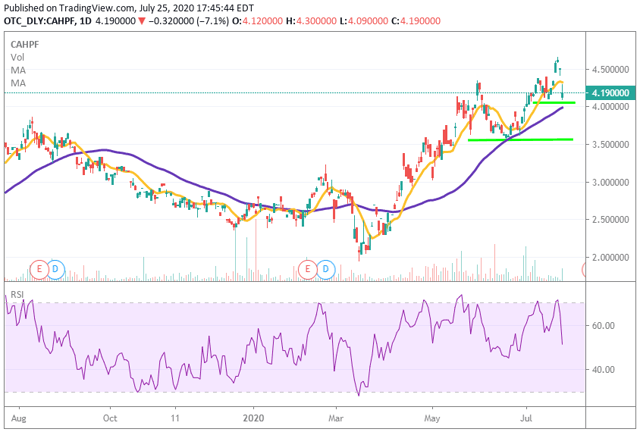 Evolution’s share price broke up to new highs, above $4.5 recently. However, after the Q4 financial results were released, it declined and tested the support in the $4.1 area. This decline was quite surprising, as the results were good and the gold price remains strong. The problem is probably the negative stock market sentiment that has been experienced in recent days. The RSI has cooled down notably and is around 50 right now. The 10-day moving average remains above the 50-day moving average quite safely. If the current support holds, Evolution’s share price may retest the recent highs at $4.66. On the other hand, should support at $4.1 be broken, the next one is at $3.55.