After a longer than expected EU Summit, a breakthrough had finally been reached with EU officials for a EUR 750bln recovery fund package. While the details show a reduction in grants to EUR 390bln from the original proposal of EUR 500bln, the fact that the EU has set a precedent of debt mutualisation is the main takeaway. As such, this is a positive take for the market with the ECB no longer being the only game in town.

Risks are tilted to the upside for the Euro Stoxx 50, having made a firm break above 3400. In the short-term, topside challenges reside at 3468 and 3485, whereby a close above confirms the bullish bias. In turn, this raises the scope for a challenge towards 3600 in the absence of a fresh negative catalyst.

On the downside, prior resistance at 3400 is seen as initial support, while more support resides at 3230-3245. A retest to these levels and a break below could neutralise the positive outlook. 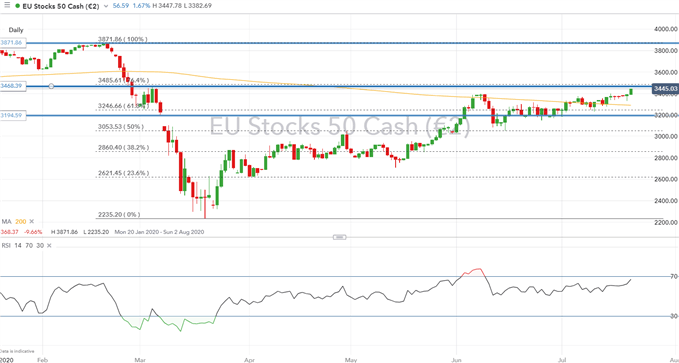 As the EU recovery funds remained mostly in favour of Southern countries such as Italy and Spain, peripheral indices may outperform relative to its counterparts, putting the FTSE MIB on a solid path. While initial resistance is seen at the 61.8% Fibonacci retracement, the index remains in a broad uptrend. Momentum signals also remain in favour of further upside and thus the key focus on the topside is at 22000. Outlook remains positive on a hold above 20,850 (200DMA), failure maintain a foothold could see a push lower towards 20500, before the 20000 figure. 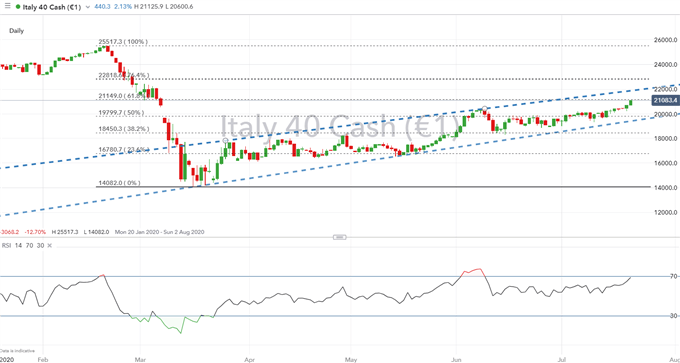 Much like its peripheral counterparts, the IBEX 35 is stands to outperform relative to core markets. Alongside this, with the IBEX 35 yet to close its March gap, the index has catching up to do, particularly as momentum indicators have yet to move within close vicinity to elevated levels. As such, a breakout from its recent range places the index on course for a test of 8000 (June peak). That said, an upside bias is likely to be negated on a close by the 38.2% Fibonacci retracement. 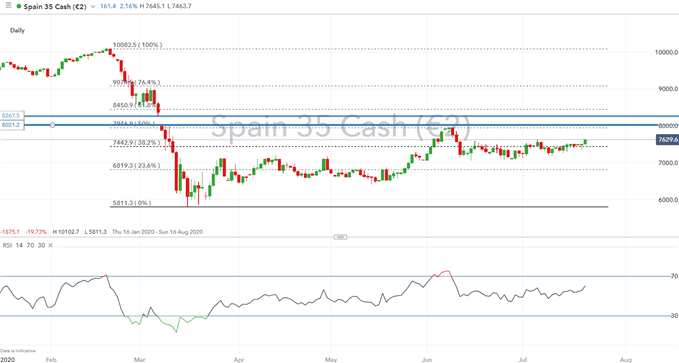