Oh sure, there are fund families that focus in sectors like energy MLPs that have seen far worse performances this year but for a fund family that has consistently seen nothing but NAV and market price erosion from their funds over the years, Voya takes the cake. This makes Voya probably the most hated fund family I can think of.

Part of the problem has been that Voya’s stock based CEFs focus in either global or international markets, meaning they haven’t been able to capture the upside that the US markets have enjoyed over their European and Asian market counterparts over the years.

The other problem for Voya has been that their equity CEFs that do focus or have a large exposure to US equities, are over-weighted in mostly value and/or commodity stocks, not technology or growth stocks, which is where all of the outperformance has been seen.

Note: All of the Voya equity CEFs are stock based and use an option write strategy of varying percentages to generate their income along with dividends

So while other fund families, like Eaton Vance and BlackRock have adapted to what works, i.e. over-weighting growth and information technology stocks, Voya has stayed with its core value strategy and has suffered because of that.

What has resulted over the years is that virtually all of the Voya equity CEFs have seen their NAVs erode substantially due to their high NAV yields that the funds just couldn’t cover, and with it their market prices have fallen down as well. For funds that started at $20 inception prices in the 2005 to 2010 time frame, all the fund’s market prices are now well below $10.

Even as the markets recover from the depths of the virus pandemic in March, virtually all of the Voya equity CEFs still trade at some of the widest discounts among all CEFs, an indication of the disregard and disgust that investors have for the Voya funds.

How bad has it been? Lets go back 1-year when I wrote this article on July 28, 2019 titled, Equity CEFs: There’s Only One Voya Fund To Buy – IGA, after Barron’s ran an article touting another Voya fund, the Voya Global Equity Dividend & Premium Opportunity fund (IGD), $4.86 current market price, $5.72 NAV, -15.0% discount, 9.9% current market yield.

In the article, I said that there really was only one Voya fund you could buy, the Voya Global Advantage & Premium Opportunity fund (IGA), $8.11 current market price, $9.42 NAV, -13.9% discount, 9.7% current market yield, which really just represented the best of the worst.

I came to this conclusion because IGA was the only Voya fund that at least had a preponderance of US based growth and technology stocks in its portfolio and thus had performed reasonably well over the years as a global fund.

This was backed-up by the following table of Voya equity based CEFs included in the article above which showed IGA was, by far, the most attractive based on its 2019 NAV performance, low NAV yield (in green at 7.86%) and relatively wide discount.

In fact, going back to 2012 when I first started keeping detailed statistics on virtually all high yielding equity CEFs available to investors, IGA is the only Voya fund that comes even close to returning over 50% at both NAV and market price since 2012.

However, for purposes of this article, what I’d like for you to notice in the table above is where all of the Voya fund’s Premium/Discount levels were roughly a year ago (shown in the circled column). They go from mostly single digit discounts all the way up to a 6.7% premium (highlighted in red).

Today, the Voya fund’s discounts have widened significantly from those levels, and the only fund that has held up reasonably well is the Voya Asia Pacific High Dividend Equity Income fund (IAE), $7.79 current market price, $8.65 NAV, -9.7% discount, 11.0% current market yield, and that’s only because of a recent price surge.

Note: The order of the funds above is kept the same in all lists for comparison purposes

Part of the reason, as I mentioned, was too high of an NAV yield for many of the funds and I even warned in the article above, Equity CEFs: There’s Only One Voya Fund To Buy – IGA, that IRR in particular, was in dire need of cutting its distribution again.

Then two months later in late September of 2019, Voya did exactly that and cut the distributions on virtually all of their equity CEFs. IRR got the biggest cut, a whopping -52.4%, from $0.162/share to $0.077/share, one of the largest cuts I had ever seen.

I wrote about that in this article, Equity CEFs: Voya Slashes Distributions For Its Funds, listing out the percentage cuts for each of the funds. Surprisingly, Voya gave the two worst performing funds at the time, (IAE) and the Voya Emerging Markets High Dividend Equity fund (IHD), $6.40 current market yield, $7.34 NAV, -12.8% discount, 11.3% current market yield, the smallest cut and even raised the distribution for IAE.

But for the Voya funds that had excessively high NAV yields, these large cuts were absolutely necessary and by the end of 2019, the Voya equity CEFs seemed to be in a much better position to offer still generous market yields but with more attainable NAV yields in the sweet spot of 6% to 9% (shown in green below), their lowest in years.

At this point, I was much more optimistic on the Voya funds and I finally felt it was time to take a position in Voya’s flagship fund, the Voya Global Equity Dividend & Premium Opportunity fund (IGD), $4.86 current market price, $5.72 NAV, -15.0% discount, 9.9% current market yield, after years of waiting for a good entry point.

So on October 3rd, I finally recommended IGD to my subscribers at $5.83 and followed that up with making IGD my 2020 Top Pick in the Global Value Fund Category. Because when you can buy a fund that has dropped in value due to a distribution cut such that its market yield is still the same as before the cut, that’s usually a winning entry point.

For the rest of 2019 and into early 2020, everything was falling into place and IGD looked like it was finally turning the corner. However, IGD’s gains did not last and COVID-19 was about to send all equity CEFs to discounts not seen since the worst of the 2008 financial crisis.

Here is a 1-year Premium/Discount chart of IGD along with milestones included in this article: 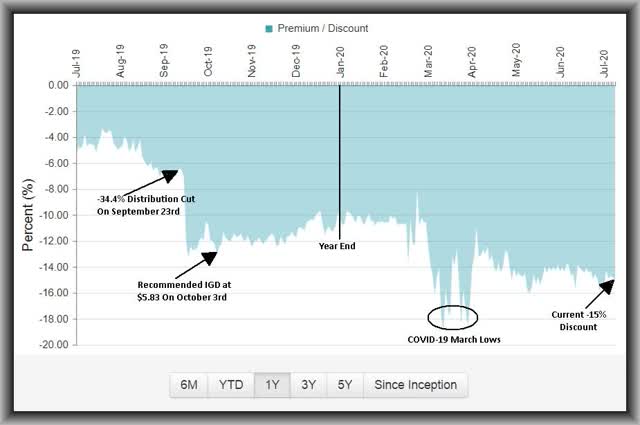 Though virtually all equity CEFs have seen their valuations drop and discounts widen (or premiums reduced) during the COVID-19 pandemic, the Voya funds seem to be suffering among the worst.

I’m sure one could argue that Voya has even more hated funds than IGD, say IRR for example, but for what was once a billion dollar fund, widely owned by scores of small and institutional investors for its uber high yield over the years, IGD’s fall from grace is probably the worst I’ve seen.

You can rationalize the sector focused funds from Voya that have performed miserably but really no worse than ETFs in the same sectors and international markets. But for a diversified global equity fund that uses an option write strategy, there’s really no excuse for how poorly IGD has performed over the years given that it could have owned more technology and growth stocks if the portfolio managers had just gone with what worked instead of sticking with their value stock approach.

Today, IGD is but a shell of itself having lost 75% of it’s NAV and 78% of a market price that once commanded $22 back in 2006. Voya has taken steps to try and improve IGD, not only cutting the distribution by the large -34.4% from $0.061/share to $0.040/share last September but also in restructuring IGD’s portfolio to essentially mimic IGA’s.

In fact, if you compare IGD’s holdings with IGA’s now, they are almost identical. Here are the highlights and top holdings of IGD’s current portfolio as of June 30th: 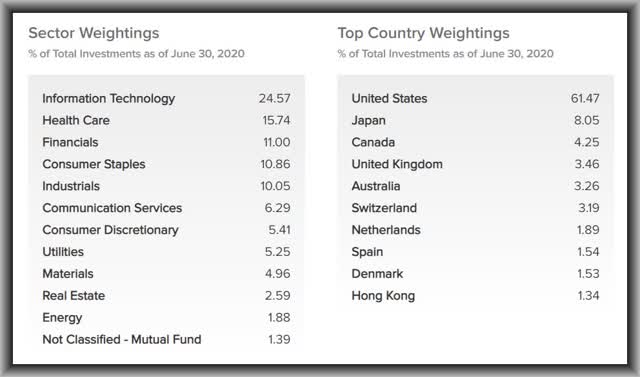 What I don’t understand is how a fund with a quarter of its portfolio in information technology and virtually none in energy is still down -14.4% YTD at NAV.

Clearly, something is not right with IGD and you can throw IGA in there as well since their portfolios are virtually the same. It makes little sense that Voya’s most overweighted US stock funds are among the worst NAV performances YTD while Voya’s overseas focused funds, namely (IAE) and its emerging market fund (IHD), are performing the best.

I will remind you of the Voya fund’s YTD NAV and market price performances:

What Voya Needs To Do

I believe Voya needs to take even more dramatic steps to turn their ship around, particularly for IGA and IGD, since it may be too late for some of their smaller CEFs quite frankly. Here are two ideas to consider:

Hate is a strong word and hate for CEFs comes in the form of rapidly falling valuations even when the broader markets are rallying. I can’t tell you how many times I’ve seen IGD or IGA down recently at market price on days when the major market averages were rallying. That, to me, is indicative of shareholders who have seen enough and just want out. Call it hate, call it disgust, but I call it a need for a change.

Status quo is not working for Voya Investment Management and bigger changes are needed. I can’t really comment on Voya’s mutual funds but trying to manage CEFs with both US and international equities while at the same time trying to write options and hedge currencies means a lot of moving parts.

Obviously, Voya has not been very successful in trying to manage all these disciplines at the same time and I believe it’s high time that Voya either consolidates and simplifies its funds or outsources areas that they know are not their strength.

At this point, I’m not even sure what Voya’s strengths are.

Thank you for reading my article. My goal is to give you observations and actionable ideas in Closed-End funds while educating you on how these unique and opportunistic funds work.

CEFs can be one of the most exhilarating and yet most frustrating security classes to invest in, and it’s important that you have someone who can be a level head during up and down periods of the market. I hope to be that voice of calm when necessary.  ~ Douglas Albo

Disclosure: I am/we are long IGA, IGD. I wrote this article myself, and it expresses my own opinions. I am not receiving compensation for it (other than from Seeking Alpha). I have no business relationship with any company whose stock is mentioned in this article.