EnerSys (NYSE:ENS) has not been a fun stock to watch over the last 5 years. From its 5-year chart on Seeking Alpha, the stock is only up 11.86% and pays a dividend that has remained flat since 2014. Even as I write this article, I expect crickets from the peanut gallery, as the ticker doesn’t have many followers and flies under the radar with just a $2.88B market capitalization.

However, over the last 10 years, the stock has performed much better (+191.35%). With its 6.9% and 9.6% CAGR growth for revenues and EPS, respectively, the business has been humming along just fine even if its stock price hasn’t. While dividends have remained constant, shares outstanding have not, as the company has successfully reduced these from a diluted basis of 50 million in 2011 to 43 million today, and with its recent Alpha acquisition and strategic focus towards being a single source energy provider, the best may still be yet to come.

The Collaboration with Corning

EnerSys recently announced a strategic partnership for making products for the 5G end market, with its July 15, 2020, SA announcement that, together with Corning (GLW), the companies will work to reduce costs and delivery times for 5G deployments. From Corning’s latest earnings presentation:

Corning’s continued comments on its Optical Communications segment indicated small doubts on short-term demand for delivery of deployments due to the COVID-19 constraints, but a general optimism on the long-term demand and growing bandwidth requirements for the major carriers, with a strongly positive outlook on the long-term trend, especially as things regarding the virus go back to normal.

The Economics of Small Cells

The small cell market is one whose size should not be underestimated. But small cells are not just one small component of a larger 5G rollout, rather, these little boxes are essential due to the technological characteristics both afforded by the component and by the physical requirements for establishing 5G speeds. As explained nicely in this guide to the backbone of 5G tech (bolded emphasis mine):

Small cells have all the same characteristics of the classic base stations that have been used by telecom companies for years. However, they are uniquely capable of handling high data rates for mobile broadband and consumers and, for IoT, high densities of low-speed, low-power devices. This feature makes them perfect for the 5G rollout that promises ultra-high speeds, a million devices per square mile and latencies in the millisecond range.

And what IEEE Spectrum called a problem for small cells rollout in practicality really highlights how much of a large extent that these small cell boxes will be needed (bolded emphasis mine again):

Having more stations means the frequencies that one station uses to connect with devices in its small broadcast area can be reused by another station in a different area to serve another customer. There is a problem, though: The sheer number of small cells required to build a 5G network may make it impractical to set up in rural areas.

S&P Global Market Intelligence was willing to provide some context on the opportunity of small cells with their latest projections on Global Small Cell Forecast through their research group Kagan. In fact, they saw a shipment number worldwide of 2.9 million units in 2019 to growing to as many as 4.2 million units in 2024, which would represent an 8.16% CAGR in volume: 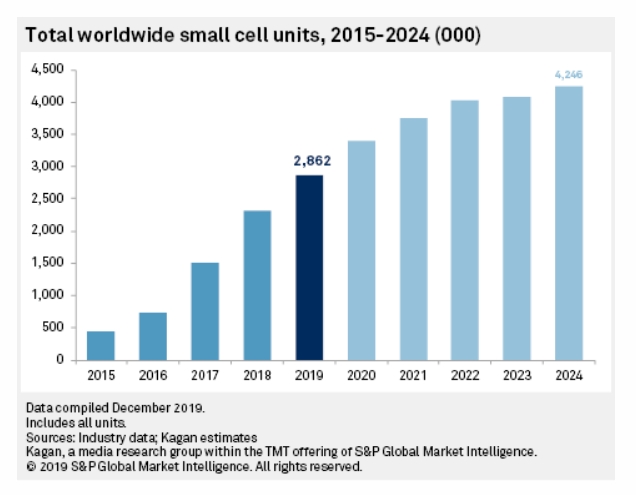 Some of the biggest small cell deployments in terms of volume have happened and are expected to happen within the following countries:

With the following companies in North America expected to be the biggest spenders in these investments for small cells and expanded networks:

What to Consider with the Small Cell Rollout

Interestingly, 5G deployment isn’t expected to surpass current 3G/4G LTE implementations until 2021-2022, with companies like China and India still trying to catch up in those technologies before fully committing to the next step of 5G.

While the differences in technological advancement and current investment still remain in play, the increasingly complex politics surrounding 5G and China’s Huawei muddy the waters on the market’s ultimate economics for all players as well. With Huawei recently banned from first using American technology, and now being excluded from the UK 5G rollout due to privacy issues, there could be serious shakeouts in the industry with not only major players, but vendors and suppliers as well.

From the company’s annual meeting for shareholders on July 30, EnerSys explained that the company currently holds a commanding role in the space for powering small cells: 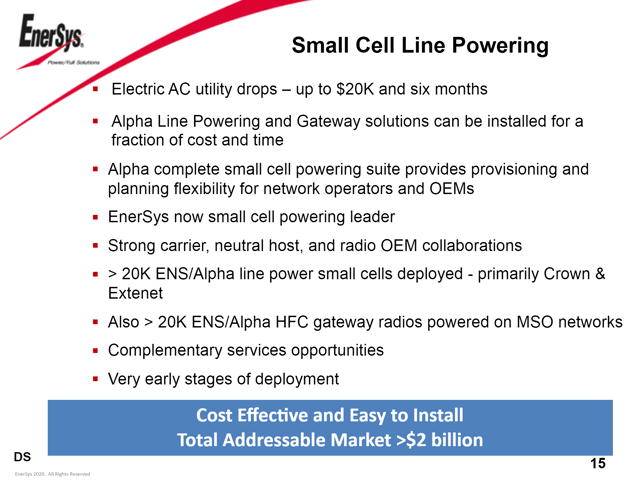 A total addressable market of at least $2 billion is nothing to sneeze at for a company of ENS’s size, particularly if it becomes the cherry on top of a large, fully integrated energy solutions company with a strong, leading position in many of the markets it already competes in. With Corning providing the fiber portion of this picture, and with the solutions the company already provides within power like distribution, conversion, storage, and enclosures, the shakeouts and build-outs should provide even more opportunities and could magnify this catalyst – and the Data Communications segment will be one to watch over the next 3-5 years: 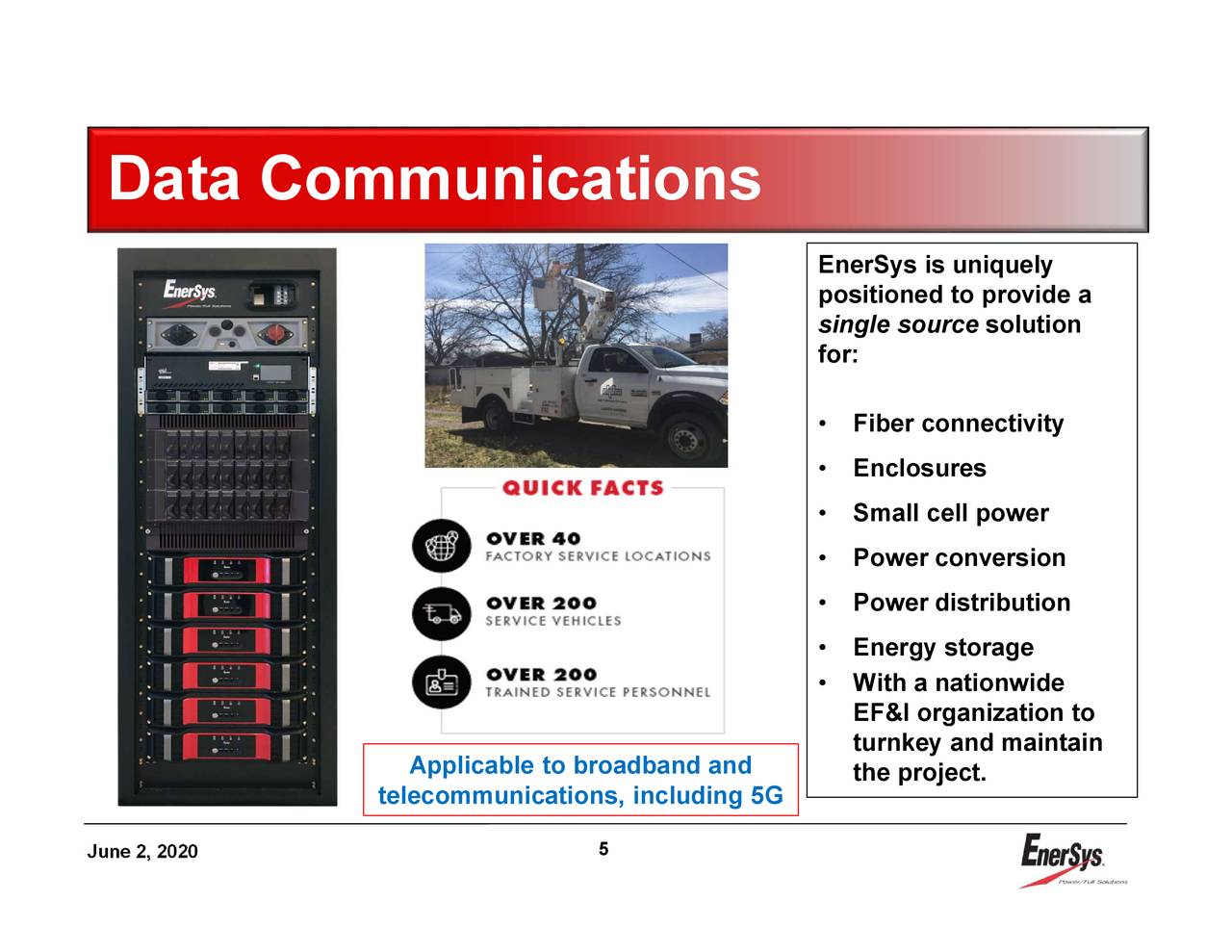 Next, I will utilize a reverse DCF to attempt to estimate the assumptions that are built into the market’s current valuation of EnerSys, and then make a general comment on whether it sounds reasonable or not. For free cash flow estimations, I will use the FY 2019 (ending March ’20) cash flow figures from Gurufocus, noting that net sales showed little movement YOY in Q4.

Estimating FCF at $3.54 per share (TTM from March ’20) means that, at $68.14, the current share price for EnerSys, Wall Street could be projecting 10.14% growth and discounting it at 9%. For the growth rate, it seems a reasonable idea if you consider that it falls in line with long-term historical EPS growth.

The discount rate at 9% is also pretty conservative in an environment with very low interest rates, in a macroeconomic environment that seems to support a continuation of that as long as the Fed continues to target 2% inflation.

Changing the discount rate for ENS from 9% to an aggressive 6% would increase the fair value calculation for the stock to $89.89, representing a possible 24.2% margin of safety. However, perhaps a discount rate closer to 9% is more prudent, considering that its recent ROIC and WACC can be calculated at 9.96% and 8.2%, respectively.

Whether an investor wants to argue those valuation points or not, it seems clear to me that there are some major tailwinds ahead of ENS that has a lot to do with its strategic collaboration and potential opportunities in small cells and 5G deployment, for a company who’s already had decent success historically and perhaps hasn’t seen its share price fully reward that as of late.

I’m bullish and will continue to stay long (shareholder since August 2017) as I monitor these developments.

Disclosure: I am/we are long ENS. I wrote this article myself, and it expresses my own opinions. I am not receiving compensation for it (other than from Seeking Alpha). I have no business relationship with any company whose stock is mentioned in this article.