Colorado and Wyoming are neighboring states that are both rich in resources. Unfortunately for them, they fall outside of the Great Basin, which covers California, Nevada, Utah, and southern Idaho, where most of the U.S. gold mining industry resides. However, there are a couple of unique prospects and one mine that shows there is opportunity to be had in these states. Most of the opportunities that reside within Colorado and Wyoming are from gold deposits placed there by dormant volcanic activity.

There are three public companies that either operate a gold mine or have prospective projects in Colorado and Wyoming. Please let me know in the comments section if I left any off of the list.

Newmont is the operator of the Cripple Creek & Victor (CC&V) mine. The mine is located near Cripple Creek, Colorado, and has been operational since 1976. As you may know, the Great Basin, where most gold deposits in the United States are found, stops midway through Utah and does not extend to Colorado.

So, where did the gold deposits at this Colorado Mine come from? The deposits, according to Newmont, come from ancient volcanic rock. Therefore, that explains why this is one of the only active gold mines in Colorado at the moment.

The CC&V mine is an open-pit mine with a heap leach and milling operation. In 2019, the operation produced 322,000 ounces of gold and had proven and probable reserves of 1.57 million and 2.8 million ounces, respectively. The image below shows the data from Newmont’s 2019 full-year financial statement.

In 2018 and 2017, the company produced 360,000 ounces and 451,000 ounces of gold, respectively. The company blames the decrease on lower ore grades being mined. The drop-off in production is concerning, but based on the proven and probable reserves and rising gold prices, it should have many years of production left ahead. The all-in sustaining costs to produce an ounce of gold from CC&V was $1,071 per ounce. The average all-in sustaining cost to produce an ounce of gold from Newmont’s North American operations was $1,187 per ounce, so the CC&V mine is producing gold below the average AISC in North America for Newmont.

In the first quarter of 2020, the CC&V mine produced 69 thousand ounces compared with 81 thousand ounces in the comparable 2019 quarter. The company again blames the decrease on lower ore grades that are being processed. Despite the lower ore grades, it was encouraging that the mine’s AISC was $1,043 per ounce, which did not increase. Based on 2020’s first-quarter 2020 production, I would expect full-year production to reach somewhere in the range of 280,000 ounces.

Here’s a snapshot of CC&V’s quarterly production from 2017 to the present. There was a gigantic spike in the fourth quarter of 2018. I do not know what caused that, but have double-checked the numbers to ensure they are correct. 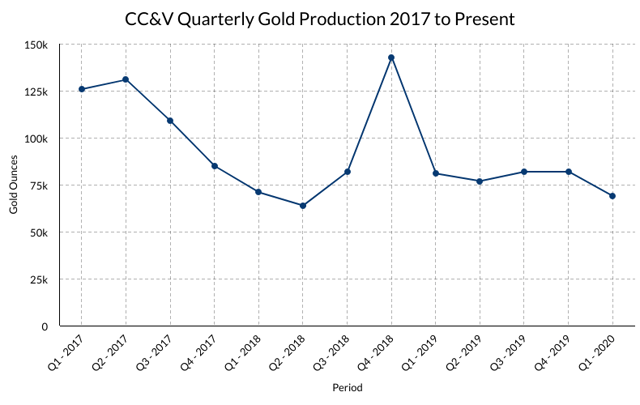 Newmont is a very large company trading with a market cap of $55 billion, so the decision to invest in Newmont rests with more than the CC&V mine. However, this provides a good snapshot of the CC&V operation.

U.S. Gold Corp. is the operator of the Copper King project located in southeast Wyoming 20 miles west of Cheyenne, Wyoming. The project is located entirely on state-owned land, which could make the path to production more streamlined. According to U.S. Gold Corp., Wyoming is a very friendly state to do business in and has been very supportive of the project.

This project is outside of the Great Basin, and the rock originates from volcanic activity. The project is a development stage gold-copper-silver-zinc project and has the potential to be an open-pit mine when completed. When completed, the company expects to produce 40,000 ounces of gold per year and 10 million pounds of copper.

The company conducted a pre-feasibility economic assessment in 2017 and found that the project will offer low cap-ex requirements with an NPV of $178 million and an IRR of 33 percent at a gold price of $1,275. 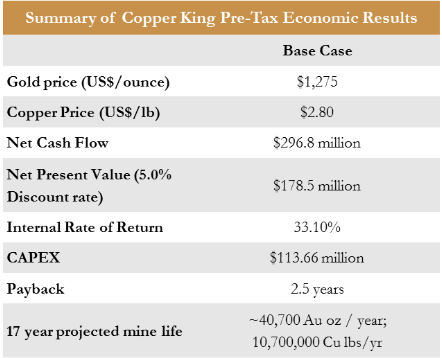 In 2020, U.S. Gold updated its economic analysis of the project to adjust for increased gold prices. The image below gives an investor a basis for how gold prices affect the economics of the project. A $325 per ounce increase in the price of gold improved the NPV by $143 million and the IRR by 19 percent. With gold prices now near $1,900 per ounce, the NPV has likely increased another $143 million to an NPV of $464 million. 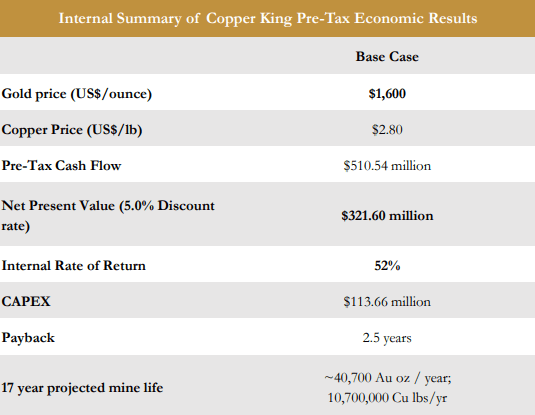 The project has measured and indicated resources of 272 thousand and 654 thousand ounces of gold.

As we move forward, and gold prices continue to rise, this adds resources and reserves to the company’s estimates. According to the company, if reserves increase the way it foresees it happening with higher gold prices, the company could double its processing rate from 10,000 tons per day to 20,000 tons per day. This means double the annual production of gold to 80,000 ounces of gold and 20 million pounds of copper.

GFG Resources is the operator of the Rattlesnake Hills Gold Project located 62 miles southwest of Casper in Natrona County. At one point, the project was on an earn-in agreement with Newcrest Mining (OTCPK:NCMGF). Newcrest had the option to acquire up to a 75% interest in the project by completing different exploration and development tasks and making cash payments at the appropriate stages along the way. However, in April of this year, Newcrest withdrew from the agreement.

GFG Resources believes it has discovered something similar to Newmont’s CC&V mine, as it has many of the same characteristics as CC&V. The chart below demonstrates that. 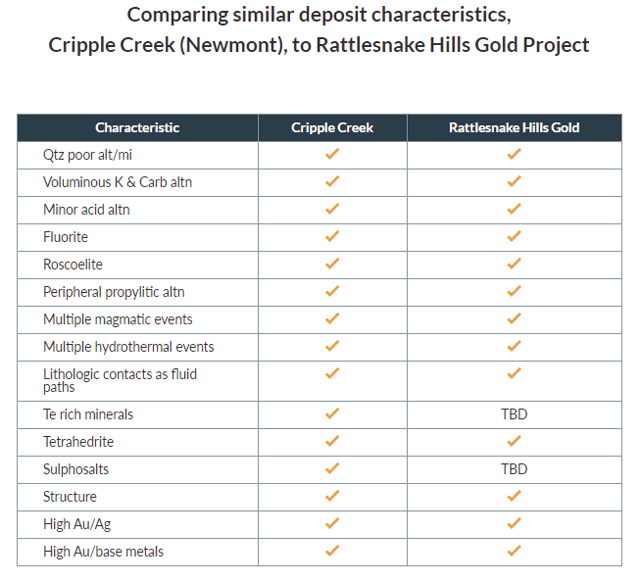 In addition to being similar to CC&V, it believes it is similar to Barrick’s (NYSE:GOLD) Golden Sunlight Mine in Montana and Coeur’s (NYSE:CDE) Wharf Mine in South Dakota.

To date, $40 million has been invested in the property by way of drilling 102 km on a small portion of the property. Most recently, Newcrest implemented a $5 million drilling program that didn’t yield good enough results for Newcrest to remain in the earn-in agreement.

Up to this point, there have been no resource estimates completed on the project.

To summarize, although the Rattlesnake Hills Project could turn out to be a good one, I don’t believe there is enough information for investors at this point. It is one to keep your eyes on in the coming years. GFG Resources currently trades with a market cap of around $23 million.

Wyoming and Colorado are both very rich in natural resources. Unfortunately, they are not big gold-producing states. However, this identified the CC&V mine and the other prospects and helped us understand the geological structures (volcanic rock) that need to be in place for mines to exist in these states as the Great Basin doesn’t overlap with them.

Of the above gold prospects, the U.S. Gold Corp. Copper King project looks the most investable. In contrast, the Rattlesnake Hills project doesn’t appear to be far enough along the timeline for investors to have confidence. That said, there isn’t a date or a plan in place for getting the Copper King Project operational, although that is the U.S. Gold Corp.’s stated goal. If there were, I’m sure it would cause the company’s share price to appreciate from its current level.

For the CC&V mine, it has been a long producing gold mine, and although it has sizeable reserves, production has been decreasing as the grade of the ore being processed has diminished in recent years.

That covers Colorado & Wyoming in this review of the United States gold mines and gold prospects. Please let me know in the comments section if I left any off of the list.