For investors who have been itching to gain exposure to remote work software stocks but have shied away due to valuation, Citrix Systems (CTXS) now presents a compelling buy opportunity. The enterprise software company – one of the oldest-known brands that has supported virtual and remote workspaces since its founding in the late 80s – has dropped a dramatic ~20% after reporting second-quarter results, despite beating Wall Street’s expectations on the top and bottom lines, exceeding its own guidance, and showing strength in converting its business toward a recurring-revenue, subscription-based model.

Citrix’s sharp fall over the past week now takes its year-to-date gains to just ~25%: still respectable, of course, but far below the momentum trades in the tech sector this year, many of which have seen their share prices more than double.

To me, this decline is just near-term profit taking. Demand looks extremely strong for Citrix’s products in the wake of the coronavirus, even if some of the deals that the company struck in Q1 were one-time.

The bullish thesis for Citrix, in my view, is still very much intact. Here are the key pieces of that thesis:

In short, stay long here and pick up more shares on the dip.

Let’s now parse through Citrix’s second-quarter results in greater detail. The below chart takes a look at how Citrix’s growth has trended over each of the past few quarters:

The first thing you will notice here, of course, is that Citrix’s revenue decelerated thirteen points to just 7% y/y growth versus 20% y/y growth in Q1. Of course, this was largely expected – in reporting the strongest Q1 that it had in decades, Citrix noted that $111 million of its revenue during that quarter was due to one-time “business continuity” deployments that it did for customers that had to hurriedly piece together a strategy for working remotely. That $111 million represented fifteen points of growth relative to 1Q19 revenues of $719 million – so after stripping that out, Citrix’s natural growth rate in Q1 would have been 5% y/y.

Citrix more or less guided to revenues returning back to the low single-digit rates that it had seen pre-pandemic. Its guidance for Q2 had called for just 2-3% y/y revenue growth, and Wall Street expectations for $769.1 million (+3% y/y) hovered in that range as well. Instead, Citrix delivered 7% y/y revenue growth, beating consensus by a wide four-point margin.

We note as well that while single-digit revenue growth isn’t anything to be excited about, it’s Citrix’s conversion to cloud that is showing a drag on revenue. You can see in the revenue breakout above that the “old” model of consuming software – selling a license upfront and then earnings support fees on the duration of that license – is on the decline, as Citrix is favoring moving its customers over to a subscription-based model. So effectively Citrix is robbing itself of near-term revenues in order to secure a steadier, richer stream of recurring revenue for the future.

Looking at some of its cloud-specific metrics helps to validate this decision. In Q1, Citrix’s subscription bookings as a mix of overall product bookings hit 76% – up fourteen points versus the year-ago quarter. 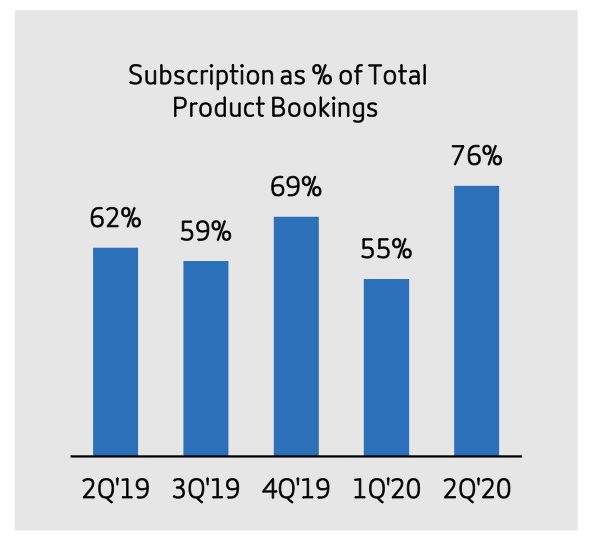 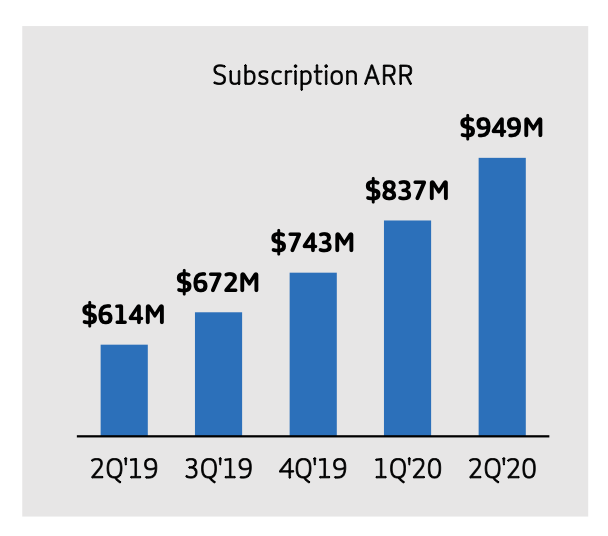 So here’s how I would summarize Citrix’s revenue trend. Last quarter, I wrote that Citrix would at least be able to sustain some portion of its accelerated growth trends – and it did, with growth lifting to 7% y/y versus its usual 2-3% y/y mark. And it did so even with a much stronger mix of cloud bookings, which actually takes down near-term revenue.

Here’s how Citrix qualitatively described its second-quarter sales momentum in its shareholder letter:

Globally, we are in a period of monumental change. Employers and employees continue to work through the challenges brought by the rapid shift to remote work, including balancing work with personal obligations, fewer natural opportunities to collaborate, distractions, and mental health concerns. While we do not have an estimate as to what the effects of these considerable changes in attitude toward remote work will be on our business longer-term, we are convinced that this trend will serve as another demand driver for our solutions in the years ahead […]

In the second quarter, strong demand for our Workspace and Networking products continued, albeit at a less hurried pace than was experienced in the back half of the first quarter, during the early COVID-19 related stay–at- home orders. Our subscription model transition regained momentum in the second quarter, with subscription bookings as percentage of total product bookings at the highest levels we’ve seen historically. Importantly, we saw strong year-over-year growth in ARR and in future committed revenue.”

It’s important to touch as well on Citrix’s strong profitability trends. Operating margins rose to 18.0% on a GAAP basis, expanding 340bps from 15.6% in the year-ago quarter. Pro forma EPS of $1.53, meanwhile, grew 26% y/y and beat Wall Street’s expectations of $1.23 (+1% y/y) by a twenty-point margin. Citrix’s current P/E ratio of ~23x based on Wall Street’s consensus FY21 EPS target of $6.14 (per Yahoo Finance) may look fully valued, but when considering 26% y/y EPS growth this quarter plus the tailwinds on the subscription side, we like Citrix’s <1x PEG ratio all the more.

It’s also worth touching on the recently expanded relationship with Microsoft in greater detail. Just this month, Citrix announced that it would be expanding its go-to-market partnership with Microsoft. As part of the deal, Microsoft sales reps would be leading with Citrix Cloud and Citrix Workspace as part of their ongoing push to move more customers to Azure.

Take a look at the summary points below: 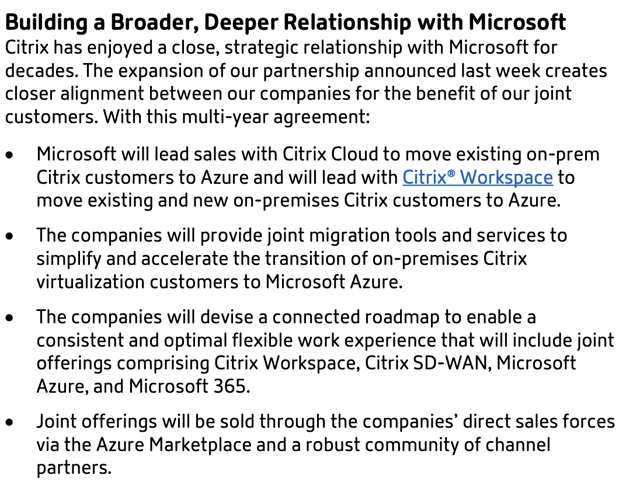 While the revenue impact of this deal is still unclear, having the sales might of Microsoft behind it – plus the fact that Azure is still growing at a ~50% y/y pace – adds further impetus to Citrix being able to sustain its above-historical revenue growth rates over the near term.

There’s a lot to like about Citrix heading out of the second-quarter earnings season, and I think the ~20% pullback in shares was a knee-jerk profit taking reaction that isn’t at all justified by Citrix’s results. In raising its full-year revenue outlook from $3.10-$3.16 billion to $3.18-$3.21 billion (+6-10% y/y), Citrix also sailed above Wall Street’s consensus target for FY20 of $3.18 billion – so there’s no red flags on the forward-looking horizon either.

Stay long and buy the dip.

For a live pulse of how tech stock valuations are moving, as well as exclusive in-depth ideas and direct access to Gary Alexander, consider subscribing to the Daily Tech Download. For as low as $17/month, you’ll get valuation comps updated daily and access to top focus list calls. This newly launched service is offering 30% off for the first 100 subscribers.

Disclosure: I am/we are long CTXS. I wrote this article myself, and it expresses my own opinions. I am not receiving compensation for it (other than from Seeking Alpha). I have no business relationship with any company whose stock is mentioned in this article.