Time and capital are inseparable investing companions in the pursuit of wealth accumulation via capital commitments to securities. The claim of passive-strategists that active investing is usually unprofitable is a lie. That claim more often serves the managers of the passively-“managed” capital than its owners.

Our sources of information employ over 100,000 world-wide gatherers and evaluators, and the comparisons of future outcomes are from evidences made in openly-competitive leveraged-“insurance” markets of relevant derivative securities, the underliers having prior reward-to-risk forecasts like today’s.

Neither Active nor Passive investment strategies can be free from mishaps due to future uncertainty arising from the competitive tactics and changing perceptions of human market participants. But while Passive strategists simply accept the costs of these mishaps to the investments of both capital and time, Active strategists find (and employ) ways to reduce these costs, to their portfolios’ benefit.

To what interim action advisable now?

The Active Investment strategy choice now is of buying and owning Apple, Inc. (AAPL) stock now, not Microsoft Corporation (MSFT) stock, during at least the early part of the next 3 months. AAPL’s exit timing depends upon the now-estimate of highest reasonable AAPL price, up to the end of September 2020, as seen by hedging actions of the Market-Making [MM] community, and upon subsequent actual market prices.

Market-trading traffic in both AAPL and MSFT is extensive (near 40 million shares a day each) due to their sizes (each over $1.5 trillion market value), and their recognized significance as members of major market indexes.

The basic investment comparison typically starts with forecasts of risk and reward for each of the competitors for capital commitment, in this case only AAPL and MSFT. But an understanding of the surrounding environment of reward and risk trade-offs by similar investment competitors may enrich the confidence of decisions about these two.

To that end we provide the perceptions of the market-making [MM] community, (employers of the previously-mentioned 100,000+). Those perceptions are implied by their hedging activities for all 30 Dow Jones Index stocks when called upon daily by major investment organizations to accomplish large-volume (block) transactions in these stocks. Please see Figure 1.

This map locates securities at the intersection of prospective price gains (green horizontal scale) and potential price drawdowns (red vertical scale) based on market-maker hedging behavior to protect their necessary endangerment of firm capital as they enable volume trades. Desirable conditions are down and to the right.

While Figure 1’s comparisons provide a perspective on many of this group’s alternative investment candidates, several conditions contribute to reward and risk. Principal questions for both are “how likely are these to happen” and “can their impact be improved?”

Figure 2 presents the MMs’ price range forecasts for just our two principal-interest investment candidates in Figure 1, along with the histories of outcomes from their prior forecasts of the same proportions of today’s up-to-down prospects as occurred in the past 5 years of daily forecasts.

This table presents data on those stocks most likely to produce satisfying RATES of capital gain under the portfolio management discipline known as TERMD, explained by the article How To Better-Than-Double Your Capital Gains (From Stocks Alone) By Using TERMD Portfolio Discipline in my SA blog.

That discipline seeks the largest, most likely, quickest to be captured net capital gains with the least interim exposure to price drawdown on the way to target reward attainment. The same discipline is applied in Figure 2 to the blue rows of market index ETF, our MM-forecast population 2800-securities aggregate, and its top-ranked 20 stocks or ETFs.

The gains and risks of Figure 1 are in Figure 2 columns of [E] and [F]. AAPL’s +15% upside prospect from [D] $361 to [B] $416 compares with MSFT’s upside potential of +11.6%. The risk exposures data of [F] draw from prior experiences rather than from current forecasts. Indeed, market circumstances often make current price risk forecasts an underestimation of what may ultimately occur. They may be more beneficial to the sellers of insurance than to the buyers.

Instead, [F] data comes from those prior forecasts (of the past 5 years) where the balance of upside-to-downside price extremes were like what is seen today in [G] of Figure 2. AAPL’s Range Index [RI] of 37 indicates nearly 2/3 of its 26% price range is to the upside, while only half of MSFT’s price uncertainty range [S] lies in each (up and down) direction.

The [F] data is an average of the worst instance of interim price below the position’s entry cost in each of the prior [L] forecasts like [G] during the [J] days the position was held. It measures the true price risks actually encountered at the hands of the relevant forecasts, not just of some prior calendar historic extreme.

The “proof” of the coming price “pudding” is suggested by what proportion of those [L] forecast outcomes wound up at a profit – shown as a % of 100 in [H]. This important dimension is used to weight the actual [ I ] payoffs realized as a ranking figure of merit (fom) when teamed up with a similar offset of [F] weighted by the complement of [H], or 100-H. That action takes place in [O] and [P] when combined in [Q].

While [Q] suggests a sense of scale, its calibration by the TIME required in [J] converts the scale into speed in [R]. The speed is stated in conventional financial-industry terms of “basis points per day” or bp/d. A basis point is 1/100ths of a percent, and in a calendar year of 365 days, 19 bp/d sustained for a year doubles the capital invested. On the 252-day market year, it takes 27.5 bp/md.

Figure 2’s column [R] provides an inclusive “figure of merit” (fom) useful for preference-ranking of securities where capital-building is of importance in future expectations. The foms show how different are the prospects for AAPL and MSFT, compared to SPY, the SPDR S&P 500 Index TRUST ETF as a market-proxy.

When price-range forecasts from qualified appraisers are available on a large population of equity securities, as they are in our population of ~2800 MM forecasts, a further notion of opportunity norms is available. Many past-history “norms” of indexes like SPY exist, but very few like this population.

Its principal limitation is that its forecast horizon is limited to the legal lives of the derivative contracts used to imply the range of coming prices. That horizon typically is limited to a few months. The TERMD risk-management discipline referred to earlier sets a time-investment cut-off at 3 months.

The figure of merit ranking has a multi-year daily history of capital-gain (and loss) outcomes for the best odds-on outlooks in the MM forecast population. The top20 bottom blue-row of Figure 2 provides a typical contrast with the row-above population.

Those higher-risk experiences are the culprit. Only 6 out of every 10 population forecasts have been [H] winners (profitable under TERMD discipline) compared to 7 out of every 8 of the top20’s. Time investments also “contribute” to the population’s worst losses, turning an overall average gain into a fom net loss, one worse than had by SPY.

The article’s purpose of examining a logical preference today between AAPL and MSFT puts AAPL out front in that contest on several fronts. But a less-discussed one may be best not overlooked, the Range Index [G] difference. Now AAPL has a RI of 37, while MSFT is up at 50 – as much downside price-change prospect seen by MMs’ hedging actions as upside opportunity.

To have a visual comparison of these two stocks’ RI histories, please regard Figure 3. 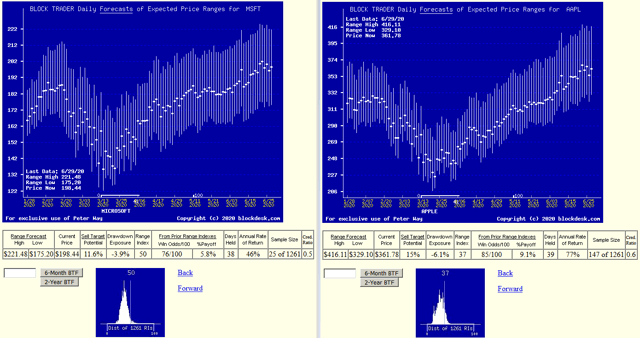 Those up and down proportions are measured by the Range Index. Its value quantity is the percentage of the whole forecast price range between the market quote and the low price extreme.

As is apparent by the small “thumbnail” frequency distribution pictures of the two securities’ daily RIs over the past 5 years, those experiences may vary considerably. A clue as to coming prices is sometimes present in the frequencies of past RIs on one side or the other of the current RI. That distinction is not strong here, but AAPL has a bit wider array of RIs than the more disciplined MSFT. There may be a bit more potential for even higher RIs (and prices) in AAPL.

Apple Inc. appears to have odds-on advantage for higher prices in the next 3 months than MSFT, and with a +77% CAGR history at today’s forecast balance looks to be more attractive to portfolio wealth-builders.

Disclosure: I/we have no positions in any stocks mentioned, but may initiate a long position in AAPL over the next 72 hours. I wrote this article myself, and it expresses my own opinions. I am not receiving compensation for it (other than from Seeking Alpha). I have no business relationship with any company whose stock is mentioned in this article.

Additional disclosure: Disclaimer: Peter Way and generations of the Way Family are long-term providers of perspective information, earlier helping professional investors and now individual investors, discriminate between wealth-building opportunities in individual stocks and ETFs. We do not manage money for others outside of the family but do provide pro bono consulting for a limited number of not-for-profit organizations.

We firmly believe investors need to maintain skin in their game by actively initiating commitment choices of capital and time investments in their personal portfolios. So our information presents for D-I-Y investor guidance what the arguably best-informed professional investors are thinking. Their insights, revealed through their own self-protective hedging actions, tell what they believe is most likely to happen to the prices of specific issues in coming weeks and months. Evidences of how such prior forecasts have worked out are routinely provided in the SA blog of my name. First months of 2019 to date have produced over 800 hundred profitable position closeouts.