Mr. Market has long been dissatisfied with the management strategy of Laredo Petroleum (LPI). The continued dismissal of Mr. Market led SailingStone (at the time, a 16% shareholder) to write a letter to the board about the stock underperformance. That led to the separation of the Chairman of the Board function from the new incoming CEO’s job duties.

SailingStone’s actions also appear to have led to a much lower level of testing and experimenting than was the case in the past. Management has also shifted from a reserve-based strategy that was popular years ago to a much more cash flow-based strategy. Therefore, Mr. Market may be expected to remove this stock from the proverbial “doghouse” as the new strategy takes effect.

Probably one of the biggest beneficiaries of this new management attitude was a very fast purchase of the oil-rich acreage in Howard County. Normally, Howard County acreage is extremely expensive to the point that acreage may not be worth considering. But the latest industry challenges have caused some acreage to come to market at considerable discounts to selling prices just a year ago.

The result is that acreage producing a lot more oil than the corporate average below 30% is now available at bargain prices from time to time. This acreage will most likely be drilled during the recovery because it benefits the company in two ways. The rising oil percentage of corporate production will increase the company profitability as long as management can keep costs steady. This will increase the benefit of rallying oil prices, enabling this stock to outperform the industry as the recovery proceeds.

Even if management never purchases any more Howard County acreage, there is still several years’ worth of drilling on that acreage. Therefore, shareholders can look forward to higher percentages of oil production for the next several years. 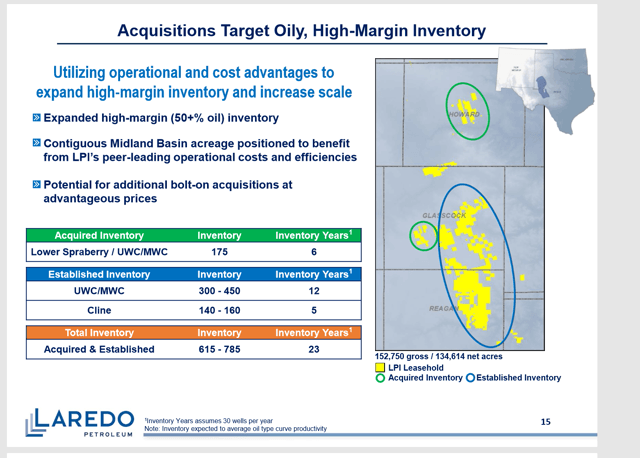 Management also acquired some “bolt-on” acreage west of the company acreage that also has a higher percentage of oil production. Most likely, the current environment should allow for another acquisition or two. This acreage gives management time to maximize returns on established acreage, while providing superior economic returns on new wells drilled during the recovery. 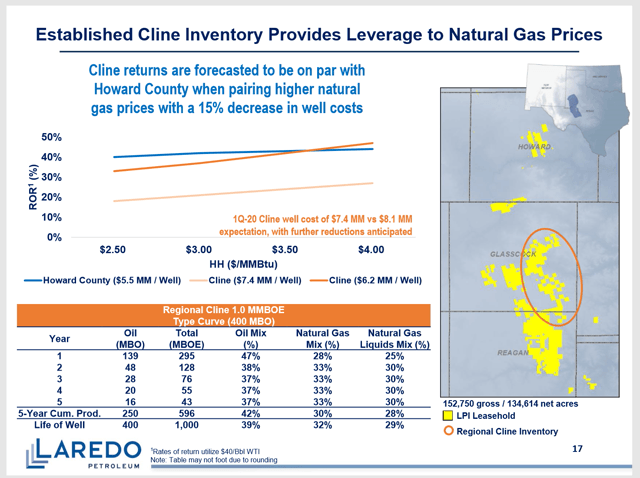 All of a sudden, natural gas production has become a profit consideration after years of being just an ancillary product (not worth considering in the well profitability). Management now has several ways to increase profitability over the historical profit rates. Plus, there is now a lot of flexibility to switch strategies should the market prices of products produced change.

This company has kept the bank line open, so that there is flexibility to grab a bargain, should some relatively desirable acreage sales appear. 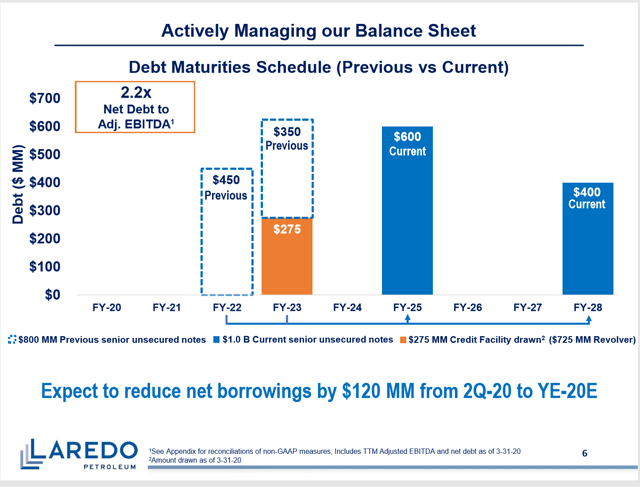 The increased profitability could potentially decrease the key debt ratio shown above once enough wells are in production. That would allow this company to expand by borrowing. A lot depends upon future oil and natural gas prices.

Currently, the company profitability is decently insulated from the oil price drives with a hedging program. Of course, that program does change substantially in 2021. Hopefully, by then, the market will see more robust demand that supports higher oil prices.

In the former rush to experiment with new well designs, some operating costs (such as drilling and completion) appeared to have been ignored. That is beginning to be addressed. 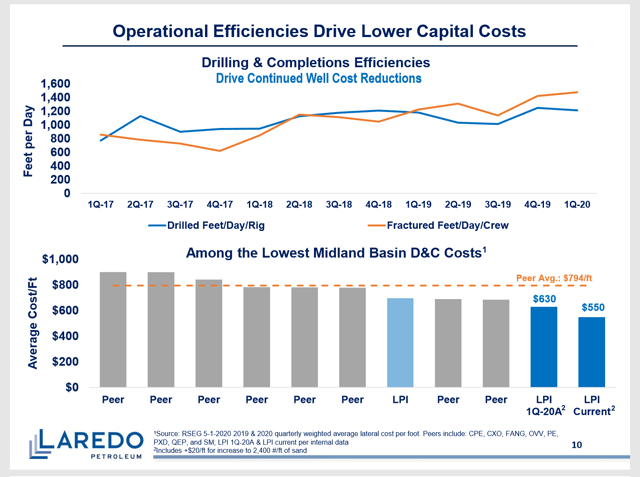 Management has already begun to report better completion efficiencies. Now, they need to begin to report higher drilling rates. It is especially noteworthy that the slide above did not comment on drilling costs as the measures shown above are among the slowest followed by the author. Sometimes, a particular area does limit the ability to improve reported feet per day drilled. However, this management does need to report if improvements can be made to bring this acreage more in line with other parts of Texas (let alone other basins).

The problem overall with the comparison is that the compared producers have very different oil and gas percentages of production. Laredo has relatively high natural gas production and condensate. That mix is not as valuable historically has an oilier production of some of the other producers in the comparison. Therefore, this slide will not tell you which companies are more profitable because a higher oil percentage often offsets higher drilling and completion costs. 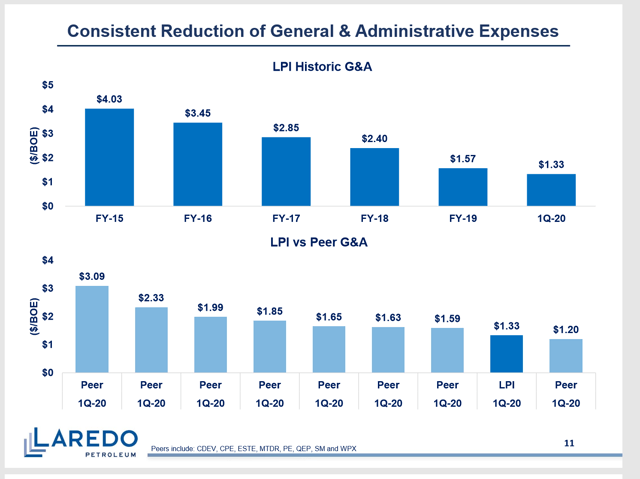 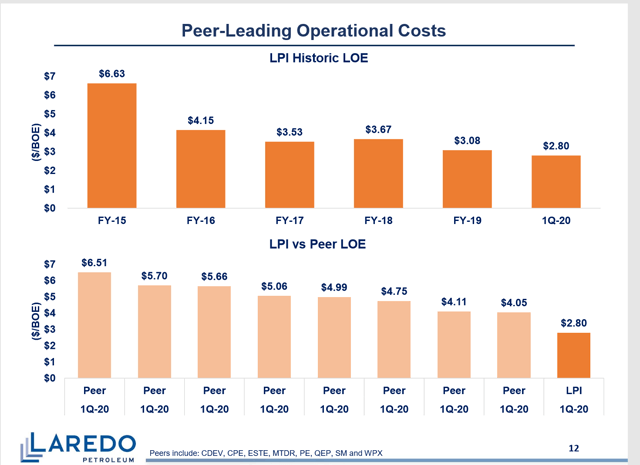 One of the things blurring this comparison is the amount of natural gas and less valuable condensates produced. The less valuable revenue stream leads to mandatory lower operating costs.

Lease operating expenses benefit from this pioneer of water handling methods. This company is in the forefront of minimizing water costs, and it shows. Whether or not they continue to maintain that edge in water handling remains to be seen. The key here is that lease operating costs are getting close to those of a dry gas operator. Yet this company does show 27% oil production. The net result is that the margins are decent, and the volume appears to increase profitability.

There is a major shareholder that believes this stock should be worth far more than the current value. That major shareholder has gone to some lengths to get management’s attention. The result is a division of the Chairman of the Board duties from the Chief Executive Officer duties, as well as some personnel turnover and an overall personnel cost reduction.

This company is in a very good position to lead an industry recovery. Clearly, the future will be much more profitable than the past has been at various pricing points.

The involvement of a shareholder like SailingStone tends to point towards this company being sold at the right price in the future. However, the current turnaround underway needs some time to show results. For the patient, long-term investor, results of holding this stock from the current price appear to be very rewarding.

I analyze oil and gas companies like Laredo Petroleum and related companies in my service, Oil & Gas Value Research, where I look for undervalued names in the oil and gas space. I break down everything you need to know about these companies – the balance sheet, competitive position and development prospects. This article is an example of what I do. But for Oil & Gas Value Research members, they get it first and they get analysis on some companies that is not published on the free site. Interested? Sign up here for a free two-week trial.

Disclosure: I am/we are long LPI. I wrote this article myself, and it expresses my own opinions. I am not receiving compensation for it (other than from Seeking Alpha). I have no business relationship with any company whose stock is mentioned in this article.

Additional disclosure: Disclaimer: I am not an investment advisor, and this article is not meant to be a recommendation of the purchase or sale of stock. Investors are advised to review all company documents and press releases to see if the company fits their own investment qualifications.