By Gita Gopinath, Economic Counsellor and Director of the Research Department at IMF

The Great Lockdown is expected to play out in three phases, first as countries enter the lockdown, then as they exit, and finally as they escape the lockdown when there is a medical solution to the pandemic. Many countries are now in the second phase, as they reopen, with early signs of recovery, but with risks of second waves of infections and re-imposition of lockdowns. Surveying the economic landscape, the sheer scale and severity of the Global Lockdown are striking. Most tragically, this pandemic has already claimed hundreds of thousands of lives worldwide. The resulting economic crisis is unlike anything the world has seen before.

This is a truly global crisis. Past crises, as deep and severe as they were, remained confined to smaller segments of the world, from Latin America during the 1980s to Asia in the 1990s. Even the global financial crisis 10 years ago had more modest effects on global output.

For the first time since the Great Depression, both advanced and emerging market economies will be in recession in 2020. The forthcoming June World Economic Outlook Update is likely to show negative growth rates even worse than previously estimated. This crisis will have devastating consequences for the world’s poor.

Aside from its unprecedented scale, the Global Lockdown is playing out in ways that are very different from past crises. These unusual characteristics are emerging all over the world, irrespective of the size, geographic region, or production structure of economies.

First, this crisis has dealt a uniquely large blow to the services sector. In typical crises, the brunt is borne by manufacturing, reflecting a decline in investment, while the effect on services is generally muted as consumption demand is less affected. This time is different. In the peak months of the lockdown, the contraction in services has been even larger than in manufacturing, and it is seen in advanced and emerging market economies alike. There are exceptions – like Sweden and Taiwan Province of China, which adopted a different approach to the health crisis, with limited government containment measures and a consequently proportionately smaller hit to services vis-à-vis manufacturing.

It is possible that with pent-up consumer demand there will be a quicker rebound, unlike after previous crises. However, this is not guaranteed in a health crisis as consumers may change spending behavior to minimize social interaction, and uncertainty can lead households to save more. In the case of China, one of the early exiters from lockdown, the recovery of the services sector lags manufacturing as such services as hospitality and travel struggle to regain demand. Of particular concern is the long-term impact on economies that rely significantly on such services – for example, tourism-dependent economies.

Second, despite the large supply shocks unique to this crisis, except for food inflation, we have thus far seen, if anything, a decline in inflation and inflation expectations pretty much across the board in both advanced and emerging market economies. Despite the considerable conventional and unconventional monetary and fiscal support across the globe, aggregate demand remains subdued and is weighing on inflation, alongside lower commodity prices. With high unemployment projected to stay for a while, countries with monetary policy credibility will likely see small risks of spiraling inflation. 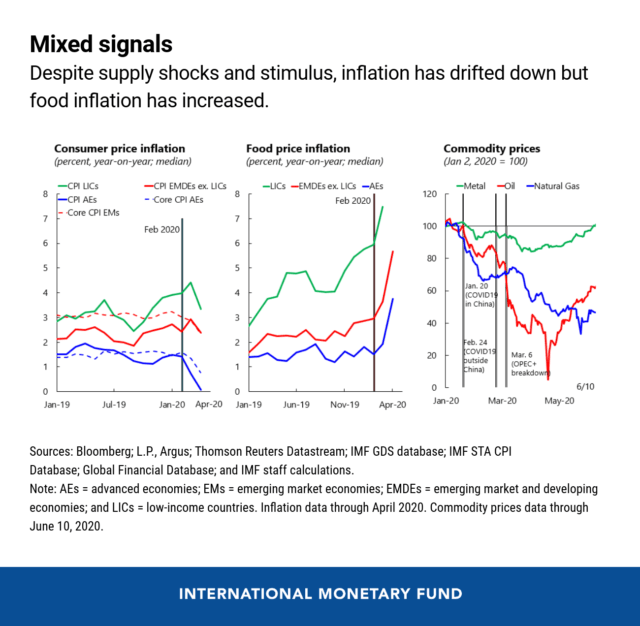 Third, we see striking divergence of financial markets from the real economy, with financial indicators pointing to stronger prospects of a recovery than real activity suggests. Despite the recent correction, the S&P 500 has recouped most of its losses since the start of the crisis; the FTSE emerging market index and Africa index are substantially improved; the Bovespa rose significantly despite the recent surge in infection rates in Brazil; and portfolio flows to emerging and developing economies have stabilized. 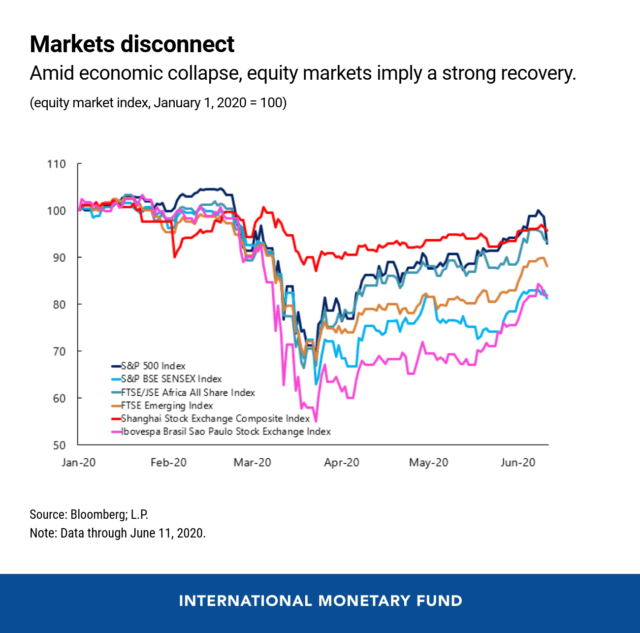 With few exceptions, the rise in sovereign spreads and the depreciation of emerging market currencies are smaller than what we saw during the global financial crisis. This is notable considering the larger scale of the shock to emerging markets during the Great Lockdown.

This divergence may portend greater volatility in financial markets. Worse health and economic news can lead to sharp corrections. We will have more to say about this divergence in our forthcoming Global Financial Stability Report.

One likely factor behind this divergence is the stronger policy response during this crisis. Monetary policy has become accommodative across the board, with unprecedented support from major central banks, and monetary easing in emerging markets including through first time use of unconventional policies.

Discretionary fiscal policy has been sizable in advanced economies. Emerging markets have deployed smaller fiscal support, constrained to some extent by limited fiscal space. Furthermore, a unique challenge confronting emerging markets this time around is that the informal sector, typically a shock absorber, has not been able to play that role under containment policies and has instead required support. We are now in the early stages of the second phase as many countries begin to ease containment policies and gradually permit the resumption of economic activity. But there remains profound uncertainty about the path of the recovery.

A key challenge in escaping the Great Lockdown will be to ensure adequate production and distribution of vaccines and treatments when they become available – and this will require a global effort. For individual countries, minimizing the health uncertainty by using the least economically disruptive approaches such as testing, tracing, and isolation, tailored to country-specific circumstances with clear communication about the path of policies, should remain a priority to strengthen confidence in the recovery. As the recovery progresses, policies should support the reallocation of workers from shrinking sectors to sectors with stronger prospects.

The IMF, in coordination with other international organizations, will continue to do all it can to ensure adequate international liquidity, provide emergency financing, support the G20 debt service suspension initiative, and help countries maintain a manageable debt burden. The IMF will also provide advice and support through surveillance and capacity development, to help disseminate best practices, as countries learn from each other during this unprecedented crisis.