Amid the coronavirus black swan, the bottom fell out of the energy sector, which was already down 40% from its peak prior to the pandemic based on the sector ETF (XLE). The double whammy of immeasurable collapse in demand and geopolitical shocks led to another ~60% collapse before a massive relief rally alongside broader markets took place.

The unprecedented price destruction meant the energy sector’s weight in S&P 500 (SPY) has dropped below a minuscule 3%. 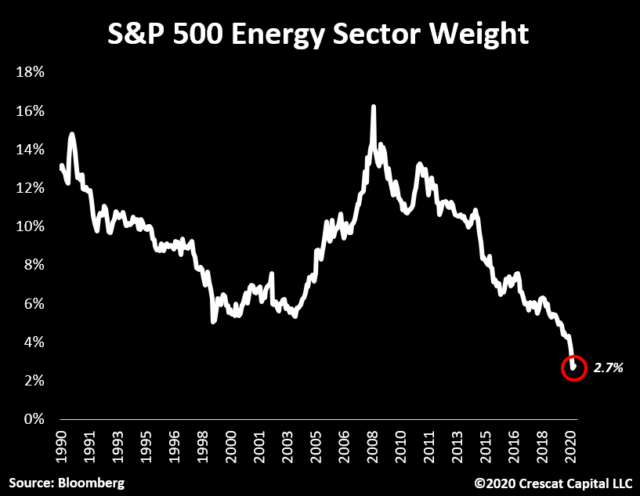 One seemingly positive development is that XLE was able to continue its furious rebound off the lows despite the carnage in crude oil prices below zero. Indeed, XLE has completely diverged from crude oil since the end of March: 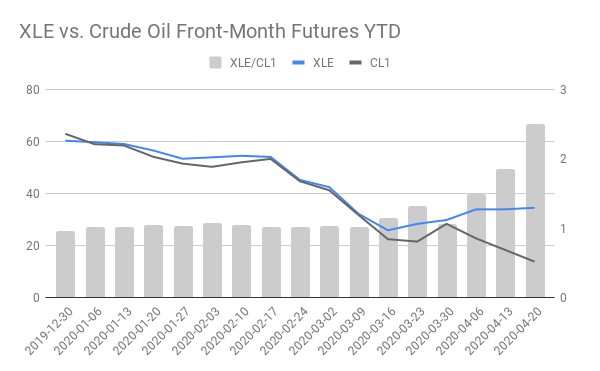 Positive Divergence Between XLE and Crude Oil Not Necessarily Bullish

As a result of the polar opposite performance in XLE and crude oil, the ratio between the two (XLE/CL1) has launched to the highest ever. That said, we reckon the phenomenon is actually not as bullish as it seems, especially during a bear market. Historically, we observe that there were only 2 other times in the last 20 years during which: 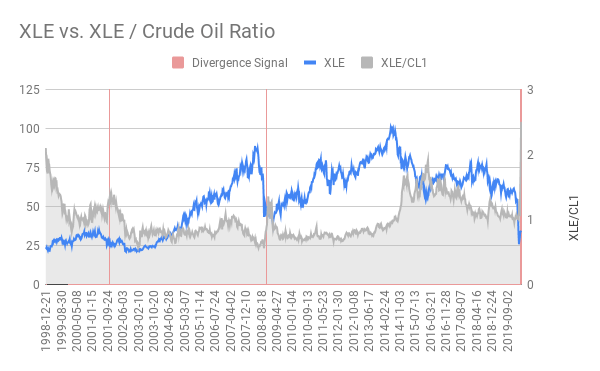 Without a surprise, the two instances were 2001 post-9/11 and 2008 Great Recession market turmoil, during which XLE also rebounded off the lows while diverging positively from crude oil. Though, the relief rally would run out of steam in both cases with more downside in the ensuing 1-3 months:

Below shows the trajectory of XLE after initially diverging from crude oil during 2001 and 2008, both of which whipsawed to lower lows (-20% drawdown) in a W-shaped consolidation over the following 2 years. 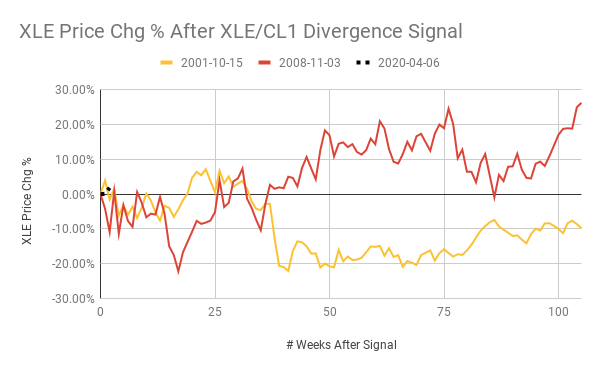 Firesale Valuations In Top Holdings Put A Floor Under XLE

The unprecedented plunge in crude oil prices has no doubt created an existential crisis for many energy companies. Indeed, following the footsteps of Whiting Petroleum (WLL), Diamond Offshore Drilling (DO) filed for bankruptcy with debts of more than $2.6bn per Financial Times. Moreover from Advisor Perspectives:

The uncertainties surrounding the viability of the industry as well as margin call-driven sell-off in the broader market led to bulk of XLE’s top holdings trading deep below their tangible book value. Though, investors were quick to scoop up energy stocks under such firesale valuations, as the subsequent rally drove price-to-tangible book value ratios back above one for most names:

Without questions, near-term fundamentals are more than gloomy for crude oil with conventional storage expected to run out of space by next month. That being said, we reckon large cap energy companies with robust balance sheets will most likely be able to ride out the storm until supply and demand eventually strike a balance. In the case of XLE, 6 of the top 10 holdings including the top 5 names which account for nearly 60% allocation of XLE, have solid debt-to-equity ratios well below 1: 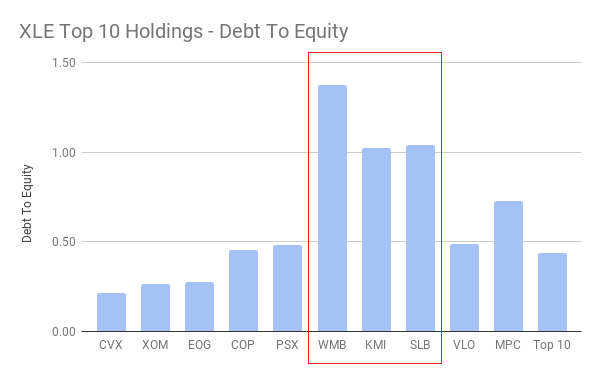 Another leverage measure based on net debt / forward EBITDA ratio is also manageable for most names except for WMB and KMI. While the heavy debt load for the more distressed names is concerning, interest coverage ratio (forward EBIT / net interest expense) remains above 2.0, suggesting they are not in an imminent solvency crisis.

While solvency concerns are not going away in the face of dire fundamentals, most of the $86bn in energy corporate debt does not mature until 2022 and beyond as pointed out by CNBC. Although more bankruptcies are inevitable for the smaller, vulnerable companies as the bust cycle continues to play out, the rock-solid names held by XLE are expected to survive and thrive once the dust settles. At the same time, any potential recovery will most likely be a drawn-out process similar to past bear markets in 2001 and 2008.

To conclude, technicals and fundamentals point to a multi-year W-shaped consolidation in the energy sector. We anticipate selling pressure to resume in XLE with recent lows to be retested, while expecting strong buying interest upon valuations dropping once again towards deep bargain levels.

Additional disclosure: We may have options, futures or other derivative positions in the above tickers mentioned.