As noted in last week’s WTI Weekly, the primary expectation for this week was for price discovery higher, barring failure of 22.04s as support. This expectation did not play out as the key support area, 22.04s, failed early in Tuesday’s auction. An aggressive sell-side breakdown then developed through major support, 20s, driving price aggressively lower to 6.50s where buying interest emerged amidst large buy excess, halting the selloff. Aggressive re-pricing higher developed to 18.25s in Thursday’s auction as balance developed into Friday’s close, settling at 16.94s.

The relief rally continued following Tuesday’s NY close, achieving a stopping point, 14.19s, early in Wednesday’s trade. Buyers trapped there as a pullback developed to 10.26s. Buying interest emerged there as the buy excess held as support before the rally higher continued to 16.21s into the EIA release (+15 million vs. +15.15 million expected) where buyers trapped, halting the rally as pullback ensued to 13.52s, where selling interest emerged ahead of Wednesday’s NY close. Wednesday’s late sellers failed to hold the auction as rotation higher developed in Thursday’s trade as the rally continued, achieving the weekly stopping point high, 18.26s, before balance developed, 18.26s-15.64s, into Friday’s close, settling at 16.14s.

This week’s primary expectation was for price discovery higher, provided 22.04s held as support. This probability path did not play out as key support failed early week, as an aggressive sell-side breakdown through 2020 major support, 20s, developed. The selloff continued to 6.50s before buying interest emerged, halting the selloff as a relief rally to 18.25s developed ahead of the week’s end. This week’s rotation (1842 ticks) traded well beyond the weekly standard deviation expectancy (1,101 ticks). We noted in recent days/weeks that the $20 strike represented key support based on the market data. Price failure at this level would likely result in the selling of futures by dealers seeking to mitigate delta/gamma exposure. 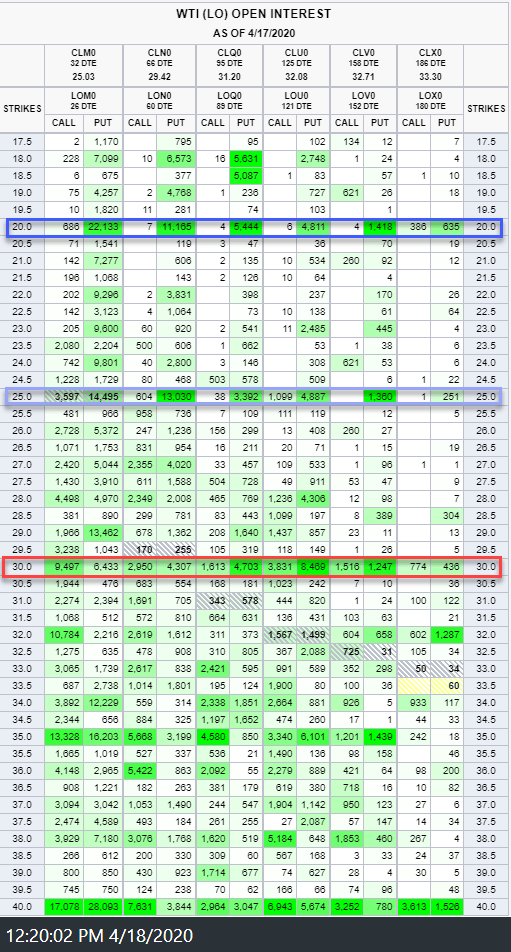 As we also discuss frequently, markets are complex systems that are densely interconnected and financialized. This week’s historic activity is largely a function of capital flow and market positioning, rather than physical supply/demand equilibrium. In addition to the selling pressure that likely began as a result of the breach of the $20 strike, it became known this week that oil ETF USO shifted its holdings from the June WTI contract further out along the curve. Historically, the USO maintained positioning consisting of predominantly of front-month NYMEX WTI contracts and cash equivalents, respectively. USO announced this week it will begin investing in NYMEX and ICE crude oil futures in any month available or varying percentages OR in non-crude oil futures investments without further disclosure. This phenomenon was a result of record inflows of retail investor demand seeking long exposure to the oil price. This demand caused the USO to run up against the CFTC’s 25% position limit in the deliverable supply of any single contract. Tuesday, USO sold 90,9670k June WTI contracts as a result, putting extreme downward pressure on the prompt price. This is financialization in all its splendor and squalor, and illustrates, yet again, the importance of capital flow and large, leveraged positions in financial markets. 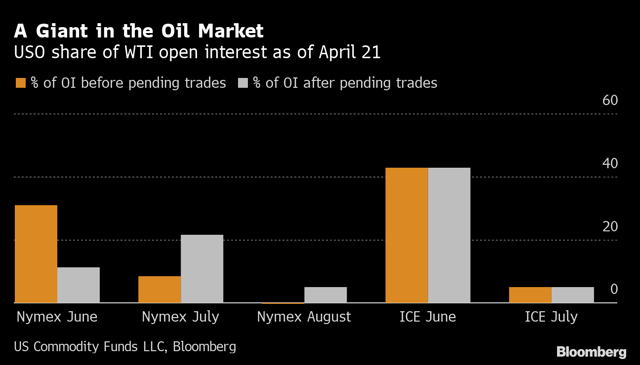 As noted in recent weeks, the selloff to 20.52s four weeks ago was likely a momentum extreme (both in amplitude and volume). Price extremes generally follow momentum extremes. This week’s historic collapse to 6.50s may serve as that price extreme. Focus into next week centers on response to this week’s key cluster, 18.26s-15.64s, following the initial relief rally from 6.50s. Sell-side failure to drive price lower from this key support area will target key supply clusters overhead, 19.20s-22.58s/25.27s-29.13s, respectively. Alternatively, buy-side failure at key support will target key demand cluster below, 12s-10.26s/8s-6.50s, respectively. The near-term bias is buy-side barring failure of 15.64s as support. 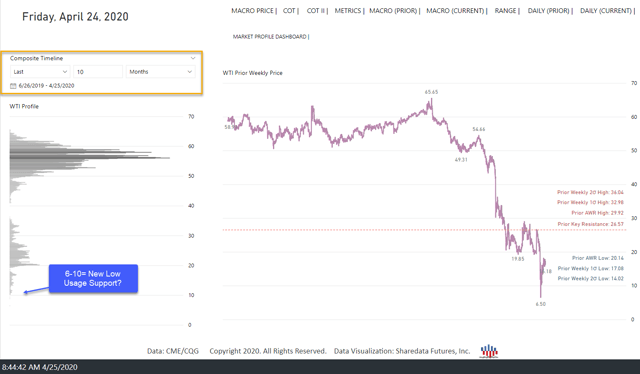 It is worth noting that market posture warranted caution on the buy-side near the April 2019 high, 66.60s, as Managed Money (MM) long posture peaked there. Similarly, from mid-December 2019 to mid-January 2020, market posture reached similar levels to April 2019 as price traded toward 64s. In both cases, the market saw meaningful corrections. This week’s report shows MM net long posture (+209k contracts), a meaningful increase from last week as MM short posture decreased (-82k contracts). Within the last five years, for a structural low to develop, MM short posture has had to exceed 100k contracts in confluence with sub-100k MM net long posture. 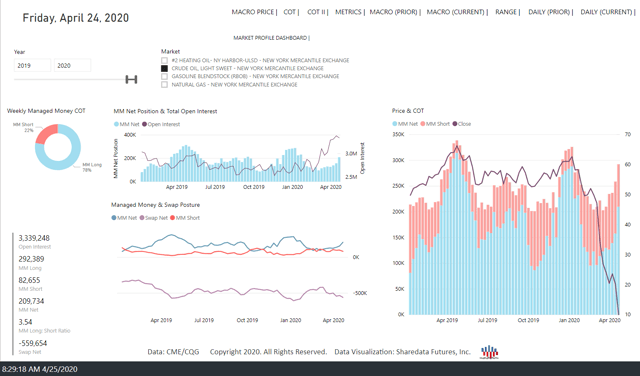 MM long:short ratio, MM net long as % of open interest, and MM net long posture are all at levels of historical extreme pessimism. This development continues as WTI now trades off the major support area in the typically bullish season (January-May). While the market sell-off has been aggressive and historic in duration and amplitude, it is likely the price action of recent weeks is part of the development of a major support area. 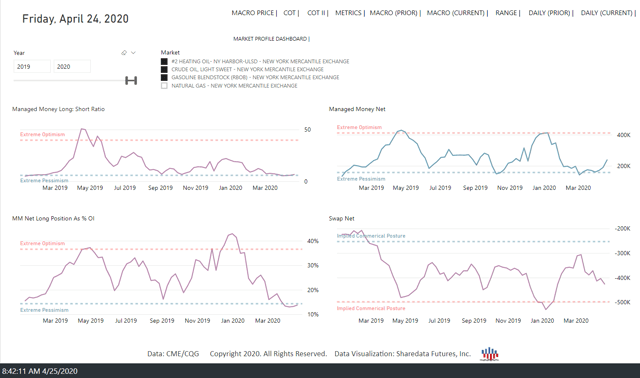