The two most common questions I have been receiving from friends are:

As readers know, the answer to the first question is “yes” with an allocation appropriate for your risk tolerance, suitable diversification, and an intermediate term horizon.

The answer to the second question right now is “wait”.

With mortgage rates in the United States once again near or at historical lows, the answer to the second question might appear aggressive to some. Some might ask: “If I can refinance today and cut my mortgage payment, why shouldn’t I execute?” The answer is borne out of my expectation that mortgage rates should decline further.

To illustrate that point I have included two simple graphs. The first graph has a twenty-plus year history of conventional 30-year mortgage rates, and prevailing 10-year Treasury yields over that time horizon.

More specifically, the blue line is the Bankrate.com U.S. Home Mortgage 30 Year Fixed National Average Index. The measure, which is the average conforming mortgage rate for 30-year conventional mortgages in this country, closed yesterday at 3.56%, and is just 0.24% above the low on this time series (3.32% reached in September 2016).

The orange line is the yield on the constant maturity 10-year Treasury note. As of yesterday, that rate stood at just 0.62%, just 0.08% above the all-time low yield reached on March 9th, 2020.

Readers should notice that the two rates have tended to move in tandem. Think of the orange line – where the U.S. government can borrow money for a period of ten years – as a base rate in the economy off which other rate-sensitive products with similar tenors are priced. Lenders in the mortgage market are paid both a premium for credit risk (i.e. compensation that the borrower will default and the collateral will be worth less than the loan amount) and a premium for providing the borrower optionality in the form of the ability to prepay their mortgage.

That option to prepay is in part why I am referencing a 30-year mortgage versus a 10-year Treasury yield. While the 30-year fixed rate mortgage is the most popular lending product in the United States, the average length of a mortgage is closer to 7 years as borrowers voluntarily refinance or sell their home and move. Some readers may favor different products (e.g. a 15-year mortgage, or an Adjustable Rate Mortgage). While not referenced herein, this article will still capture the broad differential between mortgage rates and Treasury yields.

While the two rates in the first chart have tended to move in tandem, they have not moved exactly in lockstep over time. The compensation for credit risk and prepayment risk changes in different market environments. In the second graph, I show just the difference between the average 30-year mortgage rate and the 10-year Treasury yield. 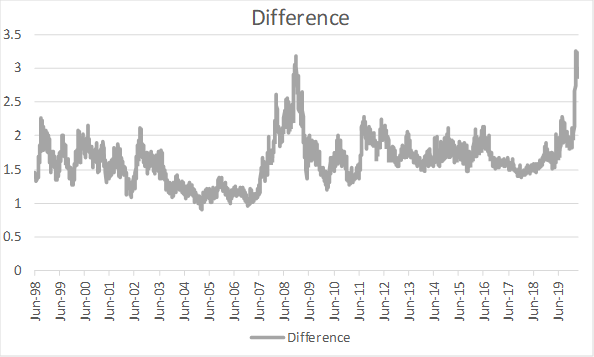 The current difference between these two rates (2.94%) is historically elevated. Over this full dataset, that average difference has been closer to 1.63%.

Why is the current difference so elevated? First, look at the last time this difference was so high. That was during the housing-related financial crisis in 2008-2009. It would certainly make sense that lenders in the housing market would require greater compensation for taking risk in the mortgage market at that time. Given the historic sharp increase in unemployment recently, part of the current spread differential is certainly a function of increased credit risk. 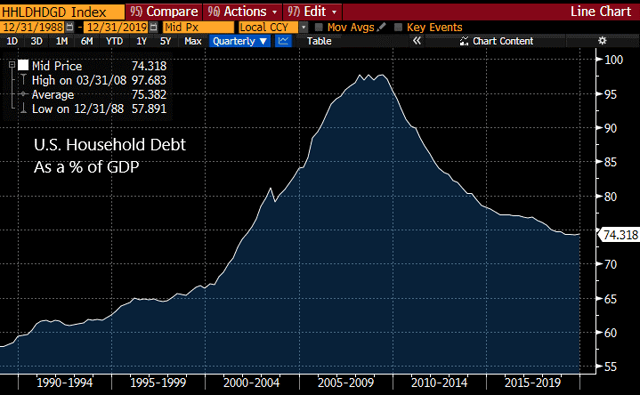 Credit spreads in other markets have not reached the heights of the Financial Crisis during this current stress environment, and it would not make sense that credit spreads in the mortgage market would be as wide as that previous episode. Lending standards are much better today. Housing valuations are less detached from incomes.

I believe another element that is keeping mortgage rates elevated relative to Treasury yields is simply a supply constraint. Given the economic shut-down, it has been more difficult to process mortgage refinance applications. It certainly would be more challenging to get a home appraisal in the current environment. What is keeping mortgage rates elevated is likely not an availability of credit, but an availability of personnel to underwrite and close a mortgage loan.If that is the case, we should see that supply constraint lifted as the economy slowly re-opens.

Another factor working in favor of this spread differential receding is that the government is incentivized to make it happen. With the government handing out stimulus checks, another way to put money in consumers pockets is to drive down mortgage rates and encourage an uptick in refinancing activity. Households could cut their monthly payment, or take some equity out of their home, to ease liquidity squeezes related to lowered employment levels.

While the government does not directly control mortgage rates in private markets, the government sponsored enterprises – notably Fannie Mae, Freddie Mac, and Ginnie Mae – are buying the vast majority of qualifying mortgages. The government’s intervention in the housing and lending markets certainly lowers rates, but that is not a new feature of the post-crisis world. To drive mortgage rates even lower, the Federal Reserve could always increase the amount of Agency mortgage-backed securities (MBB) it buys, financed by a loan from the U.S. Treasury. A higher demand for mortgage-backed securities driven by Fed purchases will increase prices and lower yields, ultimately leading to a virtuous cycle that lowers prevailing mortgage rates as well.

The spread between mortgage rates and Treasury yields is high. Part of that differential is a function of frictions in processing mortgage applications that will abate in time. The federal government, which is marshaling public policy, fiscal policy, and monetary policy to curtail the economic fallout of the public health crisis, would see its key stakeholders (its taxpayers) benefit from lower mortgage rates during this time of stress. Mortgage rates may be near all-time lows, but they are very likely heading even lower.

Disclaimer: My articles may contain statements and projections that are forward-looking in nature, and therefore inherently subject to numerous risks, uncertainties and assumptions. While my articles focus on generating long-term risk-adjusted returns, investment decisions necessarily involve the risk of loss of principal. Individual investor circumstances vary significantly, and information gleaned from my articles should be applied to your own unique investment situation, objectives, risk tolerance, and investment horizon.