In this follow up to our original bearish article on Athersys (NASDAQ:ATHX), we address the two main counterpoints that we have received through comments and messages on Seeking Alpha. We believe these criticisms miss the mark and the evidence that we presented in our article is what is relevant. Below we directly explain why we believe the criticisms do not have merit. We continue to believe that Athersys remains a compelling short with a price target of $0.

Timing of the ARDS study: later and not soon.

The first criticism has to do with the timing of the ARDS trial. We believe the following is conclusive evidence from the company itself and sellside analysts that the ARDS trial will not read out in the near-term.

The counterpoint took issue with our statement that “Healios KK has indicated ARDS data is at least a year away,” and that “according to Healios KK, the ARDS study won’t be completed until mid-2021.”

It claims that data is coming much earlier, as soon as next month. As evidence, it points to a panel discussion at the Phacilitate Leaders World conference 2020 in Miami in January that included Healios KK board member Greg Bonfiglio. During the panel, he states (9:45 to 11:05 mark), “We’re going to finish the ARDS trial in May, and we’ll finish the stroke trial by September, if the patient enrollments continue as we have expected.” The criticism we’ve received claims this is conflicting evidence that shows our timeline is incorrect and that the trial will conclude earlier.

For the 6-month follow up to be completed by mid-2021, we calculate this to mean that the company believes that patient enrollment will finish at the end of 2020 and that 28-day top-line data will be available in early 2021. We believe the trial will complete the 6-month follow up, then Healios will file with the PDMA.

Healios’ timeline is an official notice from the company and it came more recently than the statements made by one board member at a small medical conference in January where he qualifies his timeline with, “ if the patient enrollments continue as we have expected.”

We further note that his statements on timing were made before SARS-CoV-2 became a pandemic, and before Japan, where the study is being conducted, declared a state of emergency due to the coronavirus. In the US, we have seen many clinical trials be negatively impacted by travel restrictions, shelter in place, and other coronavirus containment measures.

Additionally, Healios KK issued a press release on March 26, 2020 (source Bloomberg), where the company states, “Healios continues to make enrolment progress in its Phase 2 clinical study in Japan to confirm the safety and efficacy of HLCM051 in pneumonia-induced ARDS patients (the ONE-BRIDGE study).”

To us, this is evidence that the trial is still enrolling, which would make a near-term readout in May highly unlikely as it is our understanding that once patients are enrolled, they still have to be randomized and treated, then followed for 28-days, and, finally, the resultant data needs to be cleaned and analyzed, which can take 4-8 weeks. Consequently, we believe it would take a near best case scenario for a May readout to be possible, including enrollment being completed right after the press release (though, if that were the case why wouldn’t Healios wait a couple of days to announce completion) and the data analysis coming in at the low end of the normal period. We’re now nearly two weeks from the date of the press release and there has been no announcement of the completion of the enrollment, which we believe makes May all but impossible. We continue to believe that a near-term readout is not realistic based upon what the company has most recently disclosed about the timeline.

We have also corroborated this timeline with multiple analysts who cover Healios KK. Three analysts said they expect data in 2021. In fact, the earliest timeline was provided by one analyst (of the four total) who said that the top-line 28-day data could come in 2H 2020 if enrollment is completed earlier. However, even that analyst said the official guidance is for completion of enrollment at the end of 2020 with trial completion in mid-2021.

Countering opinions seem based off of only one datapoint, which came during a small conference that took place in January. We believe our timeline is supported by the company’s latest official notice, a recent press release by the company, and corroboration by multiple analysts.

Dissecting the belief that Athersys’ MultiStem phase 2 trial in ARDS “achieved the primary endpoint of safety.”

The second counterpoint to our previous article took issue with our statement, “the company did not report data on either of the study’s two primary endpoints: Frequency of sustained hypoxemia or hypotension at 4 hours, or Suspected Unexpected Serious Adverse Reactions over 24 hours.”

The two primary endpoints can be found on the phase 2 trial’s clinicaltrials.gov page.

The CT.gov page shows that the official title of the trial is, “A Phase 1/2 Study to Assess the Safety and Efficacy of MultiStem® Therapy in Subjects With Acute Respiratory Distress Syndrome.” That is a common title for trials, and it is typical that the CT.gov page will then clearly state what it means by “safety” and by “efficacy.”

The CT.gov page clearly shows that the trial has two primary endpoints. One of the primary endpoints relates to efficacy and the other to safety. We think it’s important to note that Athersys has not, to our knowledge, ever reported data on the first efficacy primary endpoint of frequency of sustained hypoxemia or hypotension at 4 hours. This leads us to believe that there was no positive benefit in that endpoint, otherwise the company would have released the data.

In fact, “safety” is not a stated endpoint in the study, according to CT.gov. There are 16 primary, secondary, and other endpoints. Safety is not an endpoint in any of them. The word “safety” is only used once, and it’s for “Changes in blood safety laboratories,” which is not the same thing as safety.

The company also states the treatment was “well-tolerated.” We believe that’s a value judgment and reveals nothing about what adverse reactions were and were not seen in the treatment arm. It simply states an opinion which is not supported by disclosed data.

In our experience, it is common for companies to release tables with data related to safety. However, Athersys has not done so. We are also not aware of any publication in a peer-reviewed journal even though the company reported results of the study in January 2019.

From the trial’s clinicaltrials.gov page, it is clear to us that the second primary endpoint is “Suspected Unexpected Serious Adverse Reactions (SUSARs)” over 24 hours. This is different from “serious adverse events due to administration” over 24 hours. Our understanding is that the primary endpoint on CT.gov is a hard endpoint. The company could have disclosed the number of patients in the treatment and placebo arms who had Suspected Unexpected Serious Adverse Reactions over 24 hours. Instead, Athersys reported no data. It only gave a qualitative statement that the treatment was “well-tolerated,” which is not supported by disclosed data, and that the study “achieved the primary endpoint of safety,” which is also not supported by disclosed data. These appear to have simply been statements of the company’s opinion. The company then says there were “no serious adverse events due to administration.” We believe that is not the primary endpoint as defined on the CT.gov page for the trial. 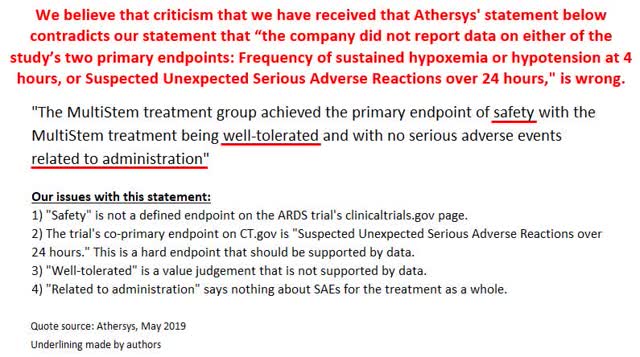 Finally, we note that the company has not released the data to support its safety claims. Instead, Athersys chose to make conclusory statements without presenting hard data. We stand by our statement that the company “did not report data.”

We believe the counterpoints that have been brought to our attention are unfounded, and we rebut them in detail here. There are more recent and multiple datapoints supporting our view of the timeline for Healios KK ARDS trial. We also have issues with Athersys’ statement about achieving a safety primary endpoint. Many terms are undefined or value judgements.

It should be noted that Athersys could provide the data necessary to reach more informed conclusions. We have taken the fact that the company hasn’t as further support for our positions that are based upon our close reading of the statements that Athersys has made.

We remain short Athersys with a price target of $0.

As we stated in our previous article, there is a risk to our short thesis. It could turn out that MultiStem is an effective therapy for ARDS. For us to be wrong, Athersys would need to run a well-controlled randomized trial and achieve a primary efficacy endpoint with statistical significance, and present hard data to show that MultiStem is safe. However, we believe MultiStem’s history of failures in clinical trials, as we detailed in the past, makes this unlikely. Furthermore, we believe by the time that Athersys completes its own trial, there may be effective therapies on the market already, as we discussed in our previous article.

Disclosure: I am/we are short ATHX.