2019 proved a difficult year for Vale (VALE), with the Brumadinho dam rupture and subsequent litigation and settlement charges negatively affecting its earnings for the year. Since the fall of the Brazilian economy in 2015 and 2016, Vale has recovered significantly and rallied almost 600% in 2.5 years. Shares are trading down 37% YTD, with mining operations affected worldwide, although demand and strong liquidity should see Vale through the crisis.

78% of total revenues come from iron ore and pellets, with the remainder in base metals and coal. Iron ore has a gross margin of 62.4%, with pellets just behind at 55.2%. Net revenues for ferrous minerals increased $2,072 million from 2018, a 7.42% increase on the year. Revenue decreases in that segment in Europe, OMEA and the Americas were offset by increasing revenues in China.

China accounts for 58.6% of total revenues for ferrous minerals and 48.6% of overall revenues. Europe, Brazil and Asia account for just over $10 billion in revenues combined. Nearly 91% of revenues are generated in exports, and large fluctuations in prices of iron can materially impact earnings.

10% changes in the price per tonne of iron can affect revenues by ~$138 million in either direction. 2019’s report had iron listed at approximately $90.3 per tonne, and with the demand shocks for ore and halted steel production in Europe, iron ore prices were down almost 14% YTD in February, and dropped nearly 12.5% YTD to start April. Iron’s spot price is currently hovering at $83.50 per tonne, on news that restocking demand and increasing profits have driven Chinese iron purchases. The current spot price is still about 7.5% below the provisional price listed in 2019, and with prices around this level, revenues for the quarter could be impacted by around $25 to $30 million due to lower spot prices.

However, operations have not been interrupted in China or Brazil, so production within Brazil and North America (besides Voisey’s Bay) are not affected, and exporting to China has not halted. Hits to production will occur with closures at Voisey’s Bay, Malaysia and Moatize, although revenue streams from China could be less impacted with exporting still occurring. 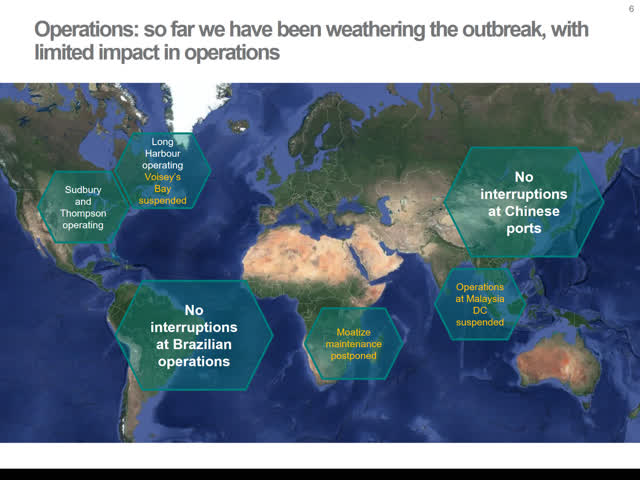 Vale had decreased its total debt by $2,410 million during 2019, and further increased its cash and equivalents by $1,566 million, cutting net debt nearly in half. Average maturity of debt is 8.04 years, with only $4.3 billion due by 2023, leaving Vale plenty of time to cover any interest and repayments. Net debt/LTM EBITDA has fallen from 1.0 to 0.5 during the first nine months of 2019, and current EBITDA/interest is 10.8x. Vale has increased its coverage abilities over its debt over the course of 2019, and although net debt/EBITDA could increase again with lower revenues, Vale’s coverage will still remain. 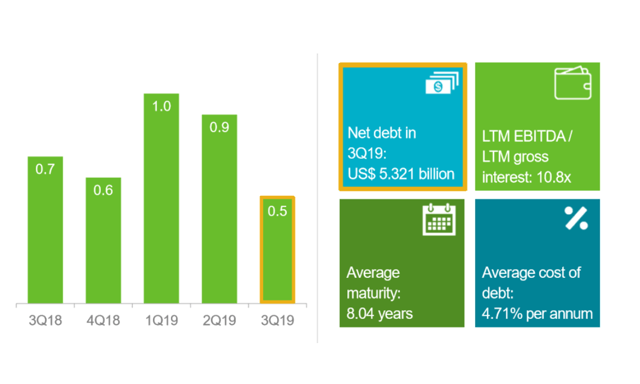 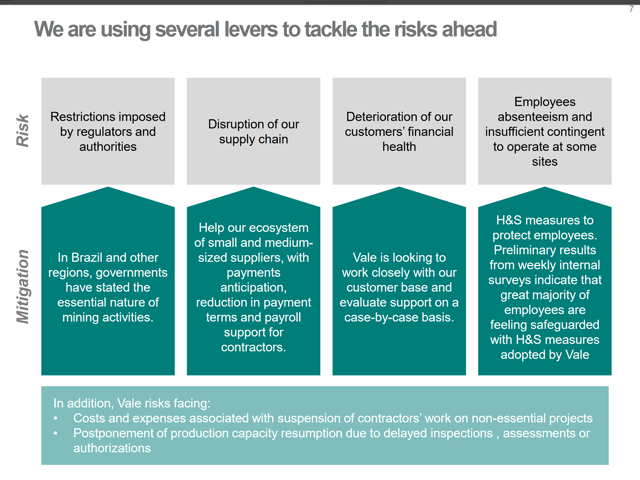 With the coronavirus outbreak, Vale has outlined certain risks and how the company plans to mitigate the impact to its operations. Regional governments have proclaimed mining as an essential activity, therefore allowing operations to continue for the most part. Vale has taken steps to protect its customers and suppliers, as well as employee safety.

Vale has announced R$932 million in advance payments to small and medium-sized suppliers throughout April to inject money into that supply chain and lessen the damage done to those suppliers. Vale has also reduced payment terms for suppliers by up to 85%. The company has also pledged support to construction and other infrastructural-related workers during the crisis.

Vale has positioned itself well to survive the coronavirus outbreak and related decreases in iron ore demand, its main export product. Impacts to revenues on 10% fluctuations in spot prices from iron ore are estimated to be ~$135 million, and spot prices have started climbing again as Chinese demand increases. Vale has increased its cash on hand and has less debt since 2018, and has sufficient interest coverage and only $4.3 billion due by year-end 2022. The company has provided relief to suppliers and injected cash into the supply chain to keep it afloat, and operations in Brazil and exports to China have not been affected. Vale’s current positioning and share price leave it room to gain, and $10 target by the end of year is very reasonable given its current financial standing.