Crude oil hit an unprecedented benchmark this past session. Through US trade, the ‘front month’ (also referred to as ‘active nearby’) US-standard grade crude futures contract posted its first negative print on record…and then went on to collapse for a settlement price of -$37.63 per barrel. Yes, that is negative 37 dollars per barrel. All things considered, this is an incredible development for one of the most important markets for the global markets and economy.

These developments do reflect extraordinary circumstances such as the sudden shuttering of many of the largest economies in the world in the fight against the coronavirus spread and the subsequent glut of supplies in the necessary commodity. OPEC+ recently attempted to cut its production (by 9.7 million barrels per day) to combat the slide in prices, but the mechanics of a deep recession prevailed. Yet, as incredible as this shocking flip is, there are caveats that indicate the world is not as topsy-turvy as this would initially lead us to believe. You would perhaps start to understand that when looking at the other global standard for oil – Brent Crude – or look at a futures table chart. Let’s look at the situation here.

First and foremost, it is important to verify that the negative US oil price was real and will be in the history books. That said, in the futures markets, there are contracts of similar grade underlying that expiry at certain times. It is important to highlight this, as when one contract expires; there is an effort by most that are interacting with the market from a speculative or hedging capacity to ‘roll forward’ – meaning to sell the contract that is expiring in move out into a contract with a later expiration. The May WTI (West Texas Intermediate) contract was the particular one that suffered so extraordinarily – dropping over 300 percent in a single day. However, the proportion of the US oil market that was active in this contract was very small overall. And, as we have seen very clearly these past few months: lower liquidity can leverage enormous volatility.

If we were to compare the soon to conclude May 2020 futures contract to the next active contract for June 2020, we would see the below. While the June contract was certainly under pressure and trading at lows not seen since February 2002 (at least for the ‘next out’), it never slipped below the (positive) $20 per barrel mark. That created an enormous spread between the technical active contract (May) and the one that held the majority of open interest (active trades). 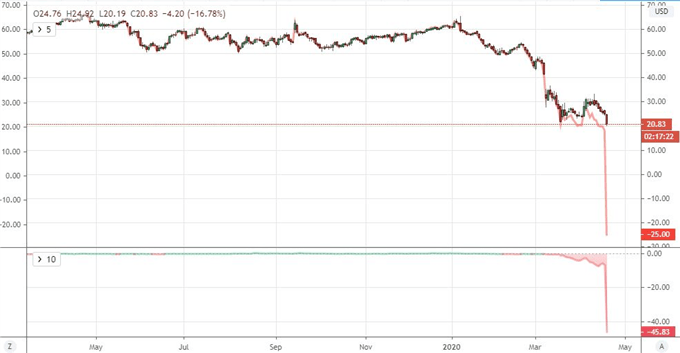 Another comparison that warrants mention is not just the two different expirations in the United States benchmark grade WTI, but a comparison between the May WTI and the global standard Brent contract the same period. The pressure in the US baseline didn’t translate to Brent which led to an enormous differential that you see below. This suggests that there may be more acute supply overcapacities around the location used for grading the contract – Cushing, Oklahoma 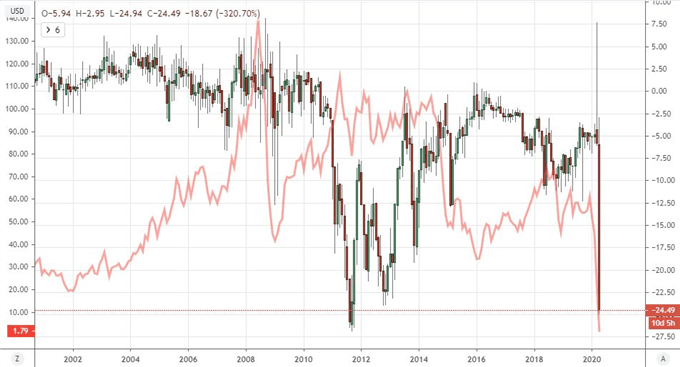 However, while I’ve mentioned some caveats that have contributed to the extreme conditions, I would not chalk all of this up to technicalities. While the market participants still trapped in the May contract are exposed to severe conditions, this unorthodox situation will act as a beacon to the general strain on one of the world’s most important commodities. The global recession that is coming on as a side effect of the pandemic is creating severe problems in supply chains that were build to handle much more flow to sustain economic activity.

This reflects on the severity of the recession. It also speaks to the serious strain on economies that (like OPEC members) who depend on exports of energy products for a substantial part of their national output as well as companies that produce the precious resource and are facing closure in this market which could touch off a wave of bad debt in the financial system. Even a caveat like the derivatives in the ETF space should be considered. The oil volatility index referenced below is the CBOE’s OVX which is attached to the popular oil ETF, USO. USO rolls forward on the commodity as a collateral approximately two weeks before contract expiry, yet fear has still surged. 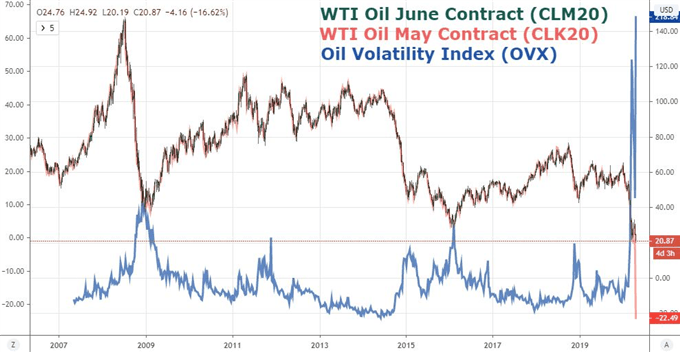 Overall, the energy market and crude specifically are unlikely to fade from view for the foreseeable future. Looking at Google search interest on a global basis for ‘oil’ – not even isolated for financial channels – interest is at the highest back to when they started sharing data in 2004. This market may have a lot of nuance around it being founded on derivatives, but it still carries a lot of clout as a representation of ‘the markets’ as well as a barometer of health for global growth. 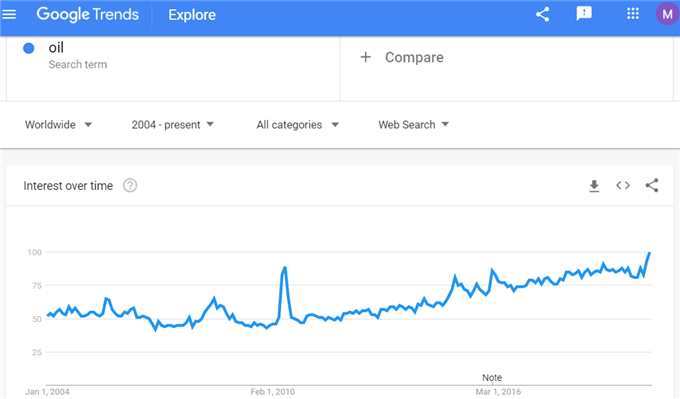