The IMF is predicting the worst economic downturn since the Great Depression (emphasis added):

Under the assumption that the pandemic and required containment peaks in the second quarter for most countries in the world, and recedes in the second half of this year, in the April World Economic Outlook we project global growth in 2020 to fall to -3 percent. This is a downgrade of 6.3 percentage points from January 2020, a major revision over a very short period. This makes the Great Lockdown the worst recession since the Great Depression, and far worse than the Global Financial Crisis.

Assuming the pandemic fades in the second half of 2020 and that policy actions taken around the world are effective in preventing widespread firm bankruptcies, extended job losses, and system-wide financial strains, we project global growth in 2021 to rebound to 5.8 percent.

This recovery in 2021 is only partial as the level of economic activity is projected to remain below the level we had projected for 2021, before the virus hit. The cumulative loss to global GDP over 2020 and 2021 from the pandemic crisis could be around 9 trillion dollars, greater than the economies of Japan and Germany, combined.

In that vein, this tweet from Liz Sonders of Charles Schwab shows various forecasts for US second-quarter GDP: 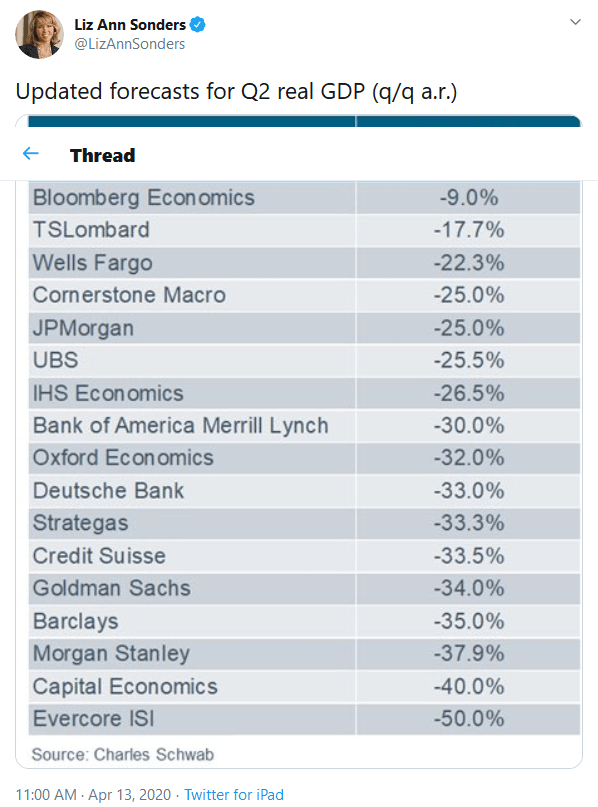 These shouldn’t be a shock to anyone since the entire US economy has been shut down.

A paper from the NBER argues that 37% of US jobs can be performed from home (emphasis added):

Our classification implies that 37 percent of U.S. jobs can plausibly be performed at home. We obtain our estimate by identifying job characteristics that clearly rule out the possibility of working entirely from home, neglecting many characteristics that would make working from home difficult. Our estimate is therefore an upper bound on what might be feasible and greatly exceeds the share of jobs that in fact have been performed entirely at home in recent years.

If we assume all occupations involve the same number of hours of work, the 37 percent of U.S. jobs that can plausibly be performed at home account for 46 percent of all wages.

The study also observes that a larger percentage of lower-wage jobs can’t be performed from home, indicating these workers are exposed to more risk in the COVID-19 era.

There’s been a big change in the way Americans are spending money: 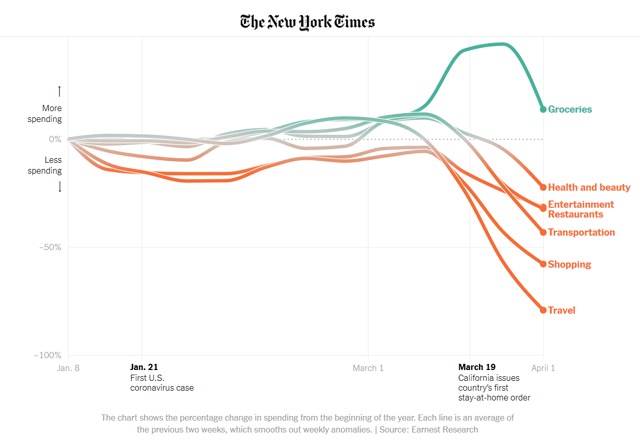 The above chart is based on credit and debit card spending patterns. The key takeaway from the above chart is that the increase in grocery store spending isn’t enough to make up for the decline in other forms of spending.

Solid day for the equity indexes. Large-caps led the way higher. Small-caps posted gains, but their performance was more middling. Note that the Treasury market continues to not sell off, indicating that the safety bid is still very much alive.

Two of the top four spots are occupied by defensive sectors. Consumer staples was the strongest performer, gaining 4.25% while health care rallied 3.33%. The good news is that tech — the largest component of the SPY and QQQ — also had a strong day; it was up 4.2%.

Let’s look at the charts with the entire Treasury market:

All of the ETFs that track the curve are still at very high levels. While the equity markets have rallied strongly, the Treasury market has consolidated gains at high levels. This tells us that traders are deeply concerned about growth prospects.

However, the equity markets continue to improve. Let’s start with the QQQ: 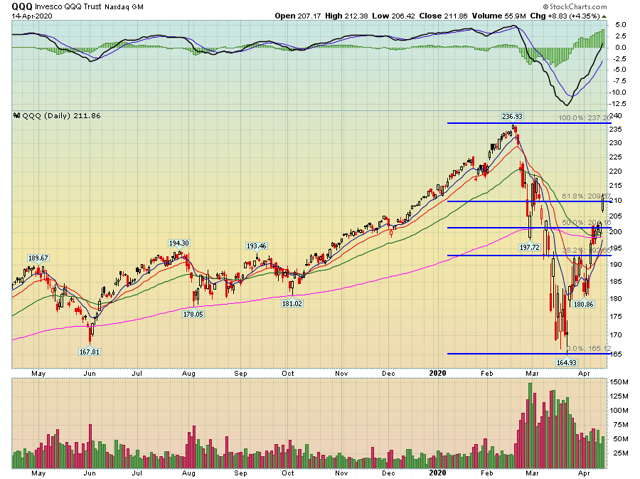 This is the best chart of the major indexes. Prices are now above all the EMAs — even the 200-day EMA. The 10-day EMA has moved above the 20-day EMA. The volume on the upswing is strong and momentum is rising. Today, prices moved through the 61.8% Fib level. 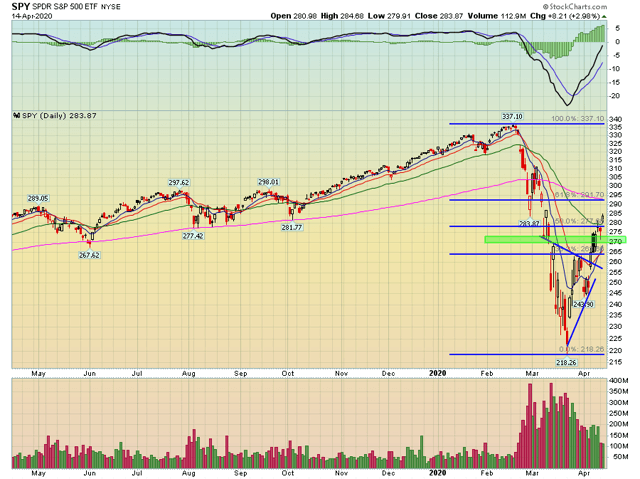 The SPY is above all EMAs except the 200-day while the 10-day EMA has crossed over the 20-day EMA. On the negative side, volume has been decreasing as the rally has progressed.

The picture gets a bit murkier with the small-cap indexes. I recently noted that all the averages have formed a cup and handle formation. While larger-caps have broken through resistance levels related to these patterns, smaller-caps indexes haven’t. 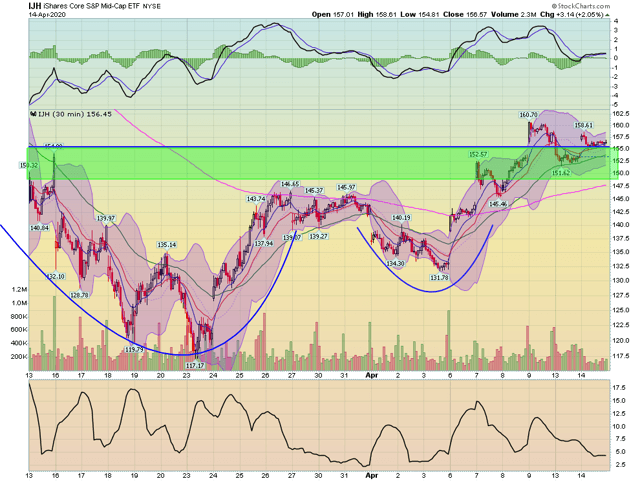 Mid-caps are just above the green area, which is from their gap lower in mid-March. The index has had a hard time getting out of this area. 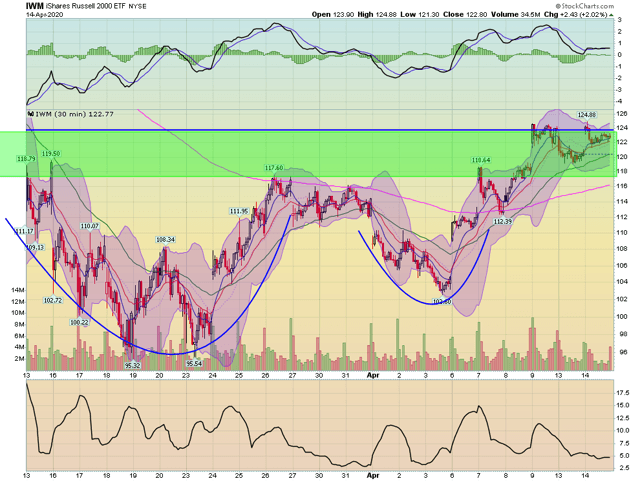 Small-caps are still stuck there, as are … 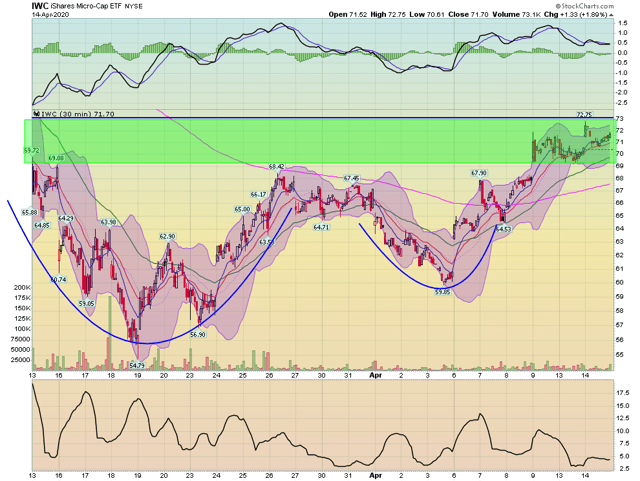 The central theme that runs through these charts is that the markets continue to improve. Traders are betting that the stimulus measures and the Fed’s back-stopping of the credit markets will be strong enough to get the economy up and running quickly. Only time will tell if they’re right.