This week, the price of crude oil fell to what was an unimaginable level as the expiring May contract on NYMEX hit negative $40.32 per barrel, the lowest level in history. Wild volatility gripped the crude oil futures arena as the price of the now active month June futures contract traded to a low of $6.50 per barrel on April 21 and traded at over $18 per barrel just two days later on April 23.

Meanwhile, one of the barometers I watch for demand in the crude oil arena is the processing spread for gasoline. The fuel is the most ubiquitous oil product. As the global pandemic’s impact hit markets like a ton of bricks, the demand for gasoline evaporated. We had never witnessed the level of price variance in the oil patch that occurred this week.

The United States Gasoline Fund, LP (UGA), moves higher and lower with the price of the fuel.

March 2020 was an ugly month for markets across all asset classes, but the price performance of gasoline was particularly hideous. As Coronavirus forced a significant percentage of nonessential workers to shelter in place, automobiles disappeared from the roads across the US and around the globe. The impact of the pandemic was so severe that air quality in the world improved dramatically. The price of gasoline tanked in March; no pun intended.

As the quarterly chart of NYMEX RBOB gasoline futures shows, the price of the nearby contract fell to a low of 37.60 cents per gallon wholesale, the lowest level of this century. The last time gasoline futures fell below the 47.50 cents level was over two decades ago in 1999.

Gasoline plunged on the back of crude oil, which fell to its lowest price since 2001, but the oil product did worse than the raw crude oil.

The chart shows that the low in the gasoline crack spread in March reached -$3.85 per barrel, the lowest level since 2008, during the global financial crisis. When the gasoline processing spread falls into negative territory, refineries lose money. A refinery does not take the risk of the price of the input, crude oil, or the output, gasoline. However, the refinery does depend on a margin for processing the energy commodity into the oil product. When the crack spread is negative, the cost of the oil and revenues from the product creates a mismatch that results in a loss. Refineries are capital-intensive, which adds to the loss from a negative refining spread.

A recovery in the gasoline refining spread

In March, the price of nearby NYMEX crude oil futures hit a low of $19.27 per barrel, and gasoline fell to 37.60 cents per gallon. In April, nearby oil futures moved to negative $40.32 per barrel. Meanwhile, gasoline outperformed the raw energy commodity leading to a recovery in the refining spread.

Gasoline could have two things going for it as we move towards May. First, as the US slowly begins to reopen the economy, the demand for the fuel will start to rise as people get in their cars to drive to work, and others venture out more than over the past weeks. Second, a whiff of traditional demand will come at a time of the year when the weather is improving. More people put more mileage on their odometers during at the beginning of the 2020 driving season. The peak season for demand comes at a time when gasoline prices are at the lowest level in years.

While 2020 demand will be nothing like it was in 2019 at this time, the low for nearby gasoline futures in May 2019 was at $1.7885 per gallon wholesale, over 2.45 times higher than the current price. A whiff of demand could send the price of gasoline back to the $1 level, or higher if Coronavirus has peaked, and we see the economy begin to operate slowly.

UGA is the gasoline ETF product

The most direct route for a risk position in gasoline is via the futures contracts on the NYMEX division of the CME. The United States Gasoline Fund, LP (UGA), provides an alternative for those looking for price exposure to the fuel without venturing into the futures arena. The most recent top holdings and fund summary for UGA include: 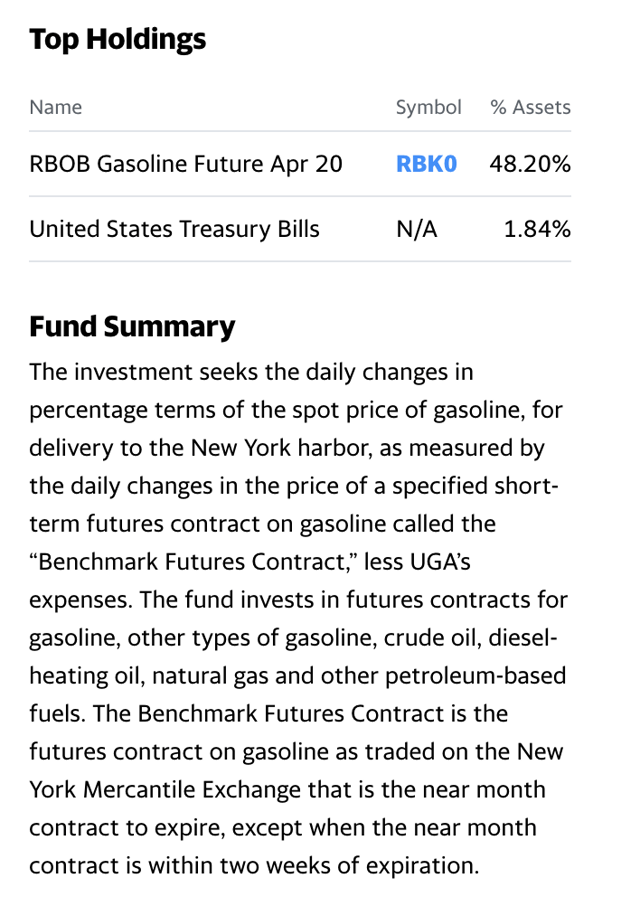 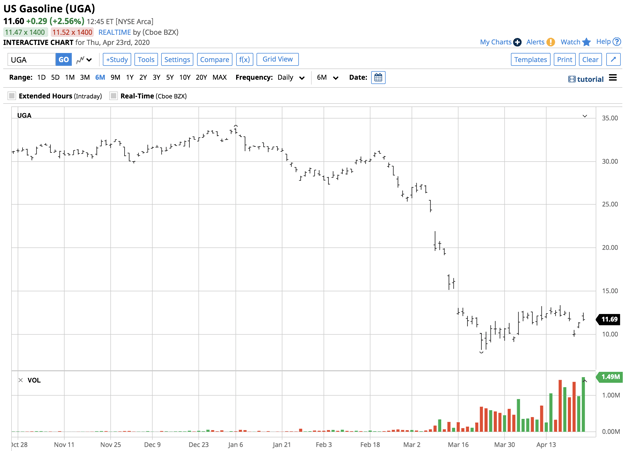 A whiff of demand in the gasoline market combined with the start of the peak driving season could continue to drive the price of the fuel higher over the coming weeks and months. The gasoline crack spread made a comeback, which could be a sign that rising demand is on the horizon.