Earnings don’t move the overall market; it’s the Federal Reserve Board… focus on the central banks, and focus on the movement of liquidity… most people in the market are looking for earnings and conventional measures. It’s liquidity that moves markets. – Stanley Druckenmiller

The Federal Reserve System is the central bank of the United States. Created by Congress on Dec. 23, 1913, the Fed was made to provide a safer, more flexible, and more stable monetary and fiscal system. Generally, the Fed has four responsibilities:

This system was created in response to the Panic of 1907, the latest of what had been regular collapses of the economy. Essentially, what this boils down to is the Fed was put in place to make economic highs lower and economic lows higher. That’s expressed in the Fed’s dual mandate that was sent to them by Congress, which is to “promote effectively the goals of maximum employment, stable prices, and moderate long-term interest rates.” 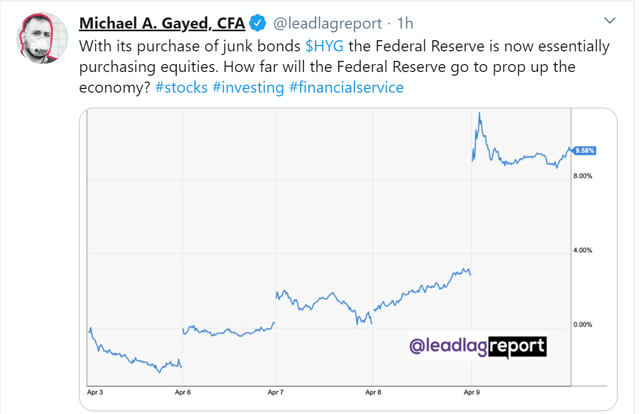 That background intro was long but necessary. I think the Fed is failing here and well outside of their bounds. The Fed is acting like it’s going to stop every recession from happening, which is an idea not based in reality. The Fed is supposed to make recessions less harsh and be a lender of last resort to provide liquidity when everything dries up, avoiding anything resembling a depression. With its recent purchase of HYG, the Fed is effectively purchasing equities, given the risk profile of high-yield bonds. And the only reason they may not be buying equities outright now is that Congress has not allowed it (yet). For me, that’s a step too far for the Fed. Not allowing risky company debt to default, and stepping into the public markets to buy an exchange-traded fund, is well outside the bounds of their responsibility. The Fed turned the risk-off environment into risk-on but taking on risk it never should have, which is why I was hammering in The Lead-Lag Report that a major up move was coming despite economic numbers looking like the end of the world. Capitalism breaks down when the Fed starts to provide liquidity to an Altice France S.A. bond yielding 7.38% on issue (largest holding in HYG), or a Sprint 7.88% bond. Companies issued this debt because they had terrible balance sheets that wouldn’t survive a recessionary period. Now that one has come, the Fed turns into a buyer of last resort for them, bailing out bad companies yet again. 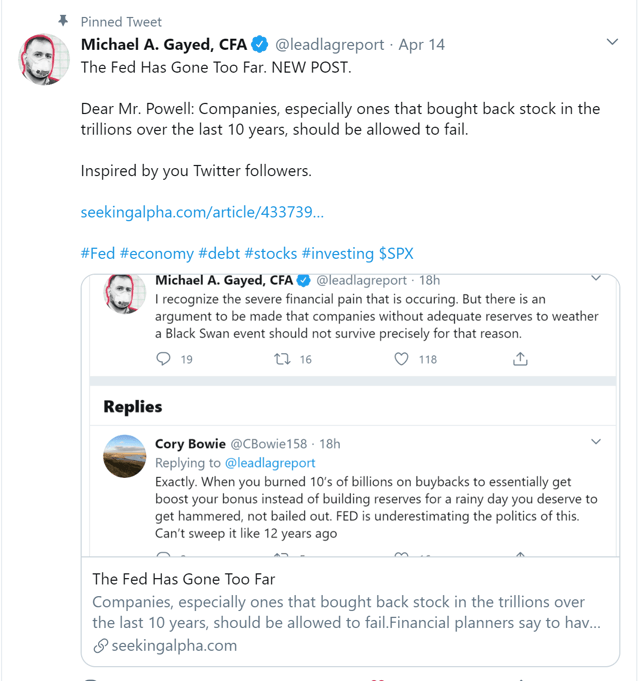 The implication on capitalism here is enormous. NYU professor and popular podcaster Scott Galloway said it best when talking to MSNBC this week. “Embrace socialism or let corporations fail – America needs to make a choice.” This isn’t capitalism when the Fed can print unlimited money and bail out companies. That’s the worst part of capitalism combined with the worst part of socialism. Businesses are benefiting during the good times, borrowing money to buy back stock, paying out dividends, and not saving anything in a rainy-day fund. And during the bad times when these same companies should be going bankrupt or getting bought by more responsible corporations or merged with competitors? They are getting bailed out by the Fed. Capitalism on the way up, socialism on the way down. That’s a broken system, one which props up stock market valuations to a point where they hit bubble territory. That will eventually pop and be a much worse situation than we are currently in. 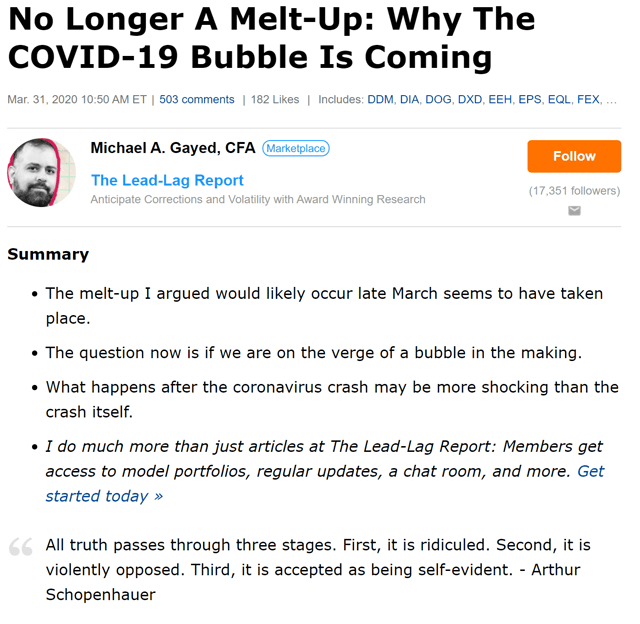 One thing catching my eye in all of this is how far the U.S. dollar (USD) has rallied despite unprecedented money printing from the Fed and lowering of interest rates. I’ve been talking about the Dollar in The Lead-Lag Report as it relates to the weekly risk-on, risk-off triggers that are built off award winning white papers I co-authored. The reason is simple, and that’s the flight to safety the USD represents. However, that represents a considerable risk if it continues. Quite simply, how do you have a flight to safety in the USD while equity markets are surging? If other currencies don’t start to strengthen against it, then you’re going to have many problems down the road, especially globally. A strong USD makes it much harder to export, and also global nations that have rising debt underlying in USD will have harder times paying it back. I don’t need to paint a global economic picture for you right now – it is ugly. What happens when a country, faced with this economic uncertainty, now has more expensive debt? The dominoes will fall eventually, and once they start, it will be hard to stop. 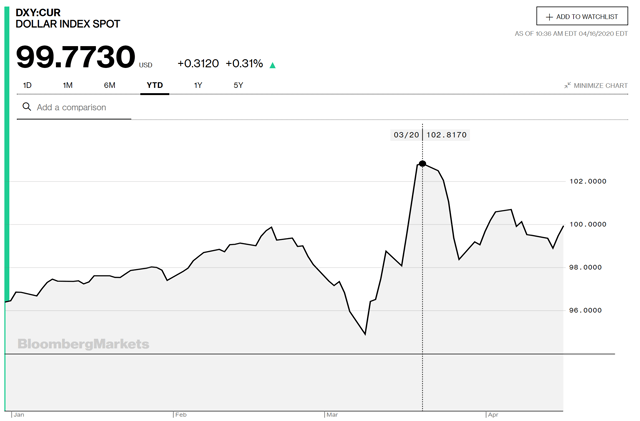 Taking a step back on whether the Fed should or shouldn’t (it shouldn’t) be doing what it currently is, we are, after all, trying to make the most of the current situation we find ourselves in. After all, if you’re thinking like I am that there is going to be a massive melt-up in stocks at some point, leading to a COVID-19 bubble in stocks, you need to start taking advantage. If you can’t beat them, join them – it might be time to get into the high-yield debt plays yourself by buying something like an HYG, as mentioned, or even the LQD. If the Fed isn’t going to let these high-yield bonds failed, you might as well collect the juicy yields of 5.4% and 3.2%, respectively. Of course, remember that high yield bonds come with default ri… oh, nevermind. I forgot that high-yield bonds have the backing of the Federal Reserve. We need to rename that asset class: High-Yield (Fed-Backed) Bonds. Interesting intermarket trends are emerging as a result, which you can tactically take advantage of with systematic risk-on/off signaling like what I provide to subscribers.

Sometimes, you might not realize your biggest portfolio risks until it’s too late.

That’s why it’s important to pay attention to the right market data, analysis, and insights on a daily basis. Being a passive investor puts you at unnecessary risk. When you stay informed on key signals and indicators, you’ll take control of your financial future.

My award-winning market research gives you everything you need to know each day, so you can be ready to act when it matters most.

Additional disclosure: This writing is for informational purposes only and Lead-Lag Publishing, LLC undertakes no obligation to update this article even if the opinions expressed change. It does not constitute an offer to sell, a solicitation to buy, or a recommendation regarding any securities transaction. It also does not offer to provide advisory or other services in any jurisdiction. The information contained in this writing should not be construed as financial or investment advice on any subject matter. Lead-Lag Publishing, LLC expressly disclaims all liability in respect to actions taken based on any or all of the information on this writing.