I cautiously observed Tatneft (OTCPK:OAOFY) since September last year and finally upgraded it to a Bullish rating recently. As it turned out, this decision was too hasty. High dividends, the foundation of Tatneft’s investment case, were almost completely cut this April. However, in these turbulent times, financial stability comes in first place, therefore the dividend cut looks reasonable here. Production cuts, however, will be a more painful thing for Tatneft’s investment attractiveness as it probably won’t be easy to restore production at closed wells. For now, I downgrade the stock to Neutral and get back to the observation mode where I will inform investors how the company is doing.

Net debt at the end of 2019 entered the positive territory for the first time since the fourth quarter of 2017 and amounted to 16.1 billion rubles. The net debt to EBITDA ratio now amounts to 0.06x.

Under the terms of the OPEC+ deal, signed on April 12, Russia needs to reduce oil production to 8.5 million barrels per day from May 1. According to Interfax, in March, Russia produced 11.3 million barrels of oil per day. The Ministry of Energy insists on proportional production cuts, though there are rumors that Rosneft (OTCPK:RNFTF) heavily opposes this approach.

As for Tatneft, under proportional cuts, the company may lose up to 119 thousand barrels of oil production per day from around 820 thousand bpd. Russian oil industry experts note that Tatneft has mostly old oil fields with heavy oil, sulphuric and bituminous. This oil is mixed with light Siberian oil and is sold as Urals oil. Thanks to this, Tatneft showed good profitability and paid high dividends.

It’s unclear what strategy the company will choose: closing old wells with low profitability or newer ones that may be reopened later with minimal risks of losing oil wells debit. This will define the extent of financial damage the company will get after the production cuts.

On April 20, Tatneft’s Board of Directors recommended to fully cut dividends for ordinary shares and pay 1 rouble per share for preferred ones. According to the company, the management “took into account the current situation in the market of oil and petroleum products, which is associated with a significant reduction in demand against the background of quarantine activities around the world.” 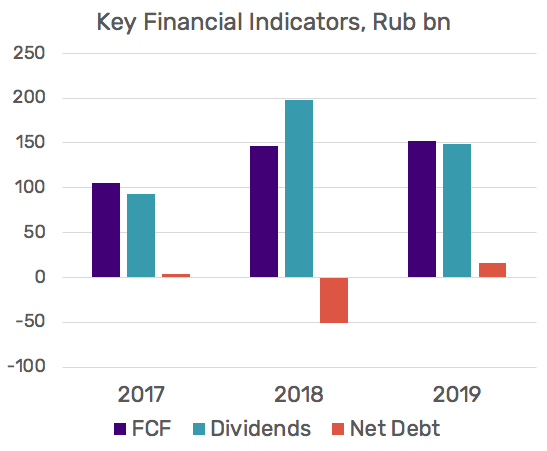 In fact, the decision of the Board doesn’t contradict with the dividend policy. According to the policy, the company must pay at least 50% of its IFRS or RAS profits, whichever is greater. Tatneft has already paid out 149 billion roubles for 2019 in dividends. This amounts to 78% of the company’s yearly profit as for 2019 – 192.26 billion roubles. For 2020, analysts estimate a total dividend yield of around 5%, but this is a subject to change depending on oil prices.

In the comments section under my previous article about Tatneft, I was asked why Tatneft preferreds are traded with a noticeable discount to ordinary shares.

I can highlight the following reasons for the discount:

The golden age of high yields seems to be over for Tatneft, at least for now. However, the company’s financial position is strong and the debt burden is minimal. This would certainly help the company to retain its positions and investment attractiveness. Amid the prevalent uncertainty in the oil market, it may be too presumptuous to make forecasts for this year, so the best we can do now is patiently wait and see what happens next. 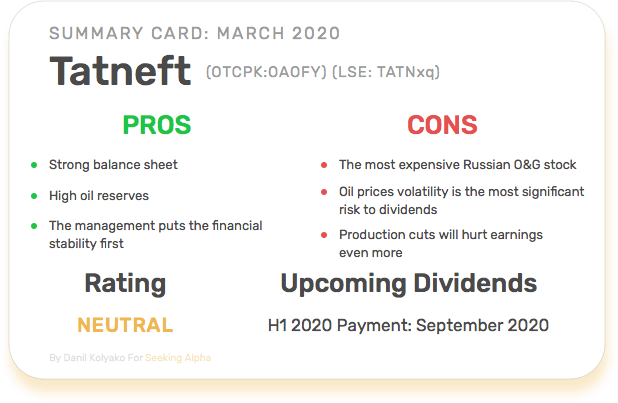