Open interest is the total number of open long and short positions in a futures market. The metric can be a useful tool when it comes to understanding the behavior of market participants. In silver, speculative interest tends to drive the price. Sentiment is a powerful force in the precious metal and often drives the price higher or lower when a trend develops. Rising open interest when the price is rising or falling is a sign that trend-following speculators are participating in the silver market. It also tends to validate if a trend is likely to continue on the up or downside. Over the past weeks, open interest in the silver market declined to its lowest level since 2014. The most direct route for a risk position is via the futures and futures options that trade on the COMEX division of the CME. For those looking to take risk in the silver market without venturing into the futures arena, the Velocity Shares 3X Long Silver ETN product (USLV) and its bearish counterpart (DSLV) replicate the price action in the silver futures market on a leveraged basis. The products are only appropriate for short-term risk positions as they suffer from time decay.

Meanwhile, many market participants continue to believe that the silver market is rife with market manipulation. Indictments of traders at some of the leading financial institutions in the world validated those opinions. While some traders have taken guilty pleas, others continue to fight the charges. Investigations into the liability of the institutions were ongoing when the global pandemic hit markets across all asset classes. White-collar criminals have been released from jail early over the past weeks. The wheels of justice ground to a halt in the current environment. Coronavirus may have a silver lining for both those waiting for their day in court. Moreover, the institutions that turned a blind eye to spoofing in the silver and gold futures markets face other problems these days that could cause the government to abandon the ongoing investigations.

March was an ugly month in markets across all asset classes, and silver was no exception.

As the monthly chart shows, the open interest metric in silver fell from just below the 230,000-contract level at the end of 2019 to 142,976 contracts as of April 23, the lowest level since February 2014. Open interest rose to a record high in the silver market in August 2019 when it hit 244,169 contracts. Silver was on its way to the high for last year at $19.54 per ounce in September when the open interest metric hit its record peak.

Meanwhile, the price action in March caused an implosion to a low of $11.74, the lowest price since April 2009. The decline in open interest in the silver market was a sign that as the price fell off the edge of a cliff, investors and speculators scrambled for an exit from their risk positions. Both the price and the level of market participation declined to multiyear lows in March. As of April 24, the price recovered to around the $15.125 per ounce level on the May contract, and open interest crawled a bit higher from a low of 138,473 contracts on April 1 to 142,976 on April 23.

Speculative interest in the silver futures market dried up on the back of risk-off conditions caused by Coronavirus, but the demand for physical silver at lower prices that over the past months remains robust.

I prefer buying physical precious metals to derivative products like mining share and ETF/ETN products in the silver market. However, the metal is bulky and requires storage. A 1,000-ounce bar of silver weighs over 60 pounds, so $100,000 worth of the metal at $15 per ounce means holding and storing over 400 pounds of the metal. For most investors and traders, a significant amount of capital in silver requires a vault, which leads to additional charges.

When it comes to smaller bars and coins, dealers around the world tack on significant premiums. Moreover, the bid-offer spread for physical silver tends to be wide, making buyers pay premiums and sellers experience discounts.

Short-term trading via USLV and DSLV

The silver futures market is the most direct route for taking long or short-side risks in the volatile silver market. For those who wish to trade silver with leverage without venturing into the futures arena and dealing with original and variation margins, the Velocity Shares 3X Long Silver ETN product (USLV) and its bearish counterpart (DSLV) provide an alternative. USLV and DSLV are short-term tools that move with the price of silver and provide the leverage of the futures market without the regulatory or margining requirements. However, the ETNs only trade during hours when the stock market is operating, while futures trade around the clock on business days.

The fund summary for USLV states: 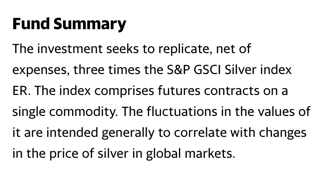 The bearish DSLV product operates inversely. USLV has net assets of $200.93 million compared to $29.29 million for DSLV. The bullish and bearish silver ETN products trade an average of 720,642 and 223,892 shares each day, respectively. Both ETNs chart an expense ratio of 1.65%. 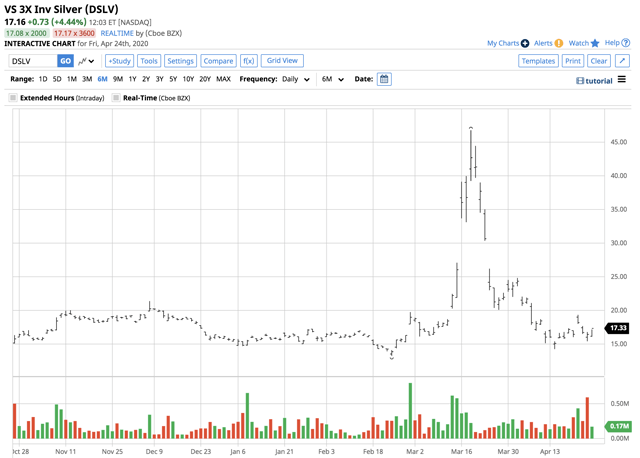 Over the same period, DSLV rose from $13.25 to $46.75 per share or more than 3.5 times higher as the ETN delivered a more than triple percentage return compared to silver on the downside. 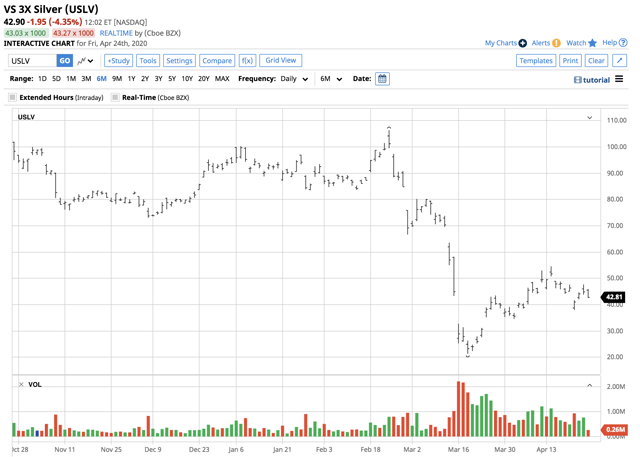 Over the same period, USLV rose from $21.30 to $54.54 per share or 156%, over triple the appreciation in the price of May silver on a percentage basis. The ETNs performed well when it comes to following the price of the precious metal.

A silver lining for silver spoofing

Over the past months, I have followed the plight of the traders facing a slew of charges, including conspiracy, fraud, and spoofing in the precious metals markets. On February 12, I wrote:

“The DOJ and CFTC are likely to continue to charge others in the widening spoofing and RICO investigations. I would not be surprised to see the inquiry lead to arrests of more traders and even the person who ran the commodity trading business at JPMorgan for years. Some of the current traders facing charges and long prison terms under RICO charges are likely to sing like canaries and give the DOJ enough for other indictments. However, it is essential to remember that the prosecutors have had a poor conviction record since 2008 with these high-profile cases.”

While Coronavirus has left a trail of sickness and death in its path, and markets have experienced deflationary spirals, those facing charges could emerge winners from the health crisis. Judges and government officials are releasing white-collar criminals from jail. Convicts are serving out the balance of their sentences in the comfort of their homes. Since many of us are following guidelines to remain at home, the move to prevent the spread of the virus could amount to a get out of jail free card. Michael Cohen, convicted of lying to Congress and other charges, is leaving prison earlier than November 2021, the day his sentence ends. At the same time, with the courts backlogged dramatically, hearing and trial dates are being pushed far into the future. Traders from Deutsche Bank, JP Morgan, and other financial institutions are awaiting their days in court. Coronavirus may turn out to be a silver lining when it comes to pending charges and the potential for significant prison sentences.

The investigations into the financial institutions that either sanctioned or condoned the activity turned a blind eye or did not supervise rogue employees; the current crisis is likely to make the government back off in the interest of the health of the overall financial system. In that same piece in February, I wrote:

“I believe we will see more indictments, and the DOJ will attempt to create a case against JPMorgan. However, while individuals will face charges, the government will only extract fines from JPMorgan. When it comes to the prosecution record of the DOJ, juries have sided with defendants, and it will be interesting to see if that trend continues in the case of gold and silver manipulation. I continue to believe that the DOJ overstepped with the RICO charges, which will lead to acquittals. I do not condone illegal spoofing and manipulative behavior. Those responsible should face punishment. Meanwhile, when the government seeks a penalty that does not fit the crime, we have seen that juries reject the cases. When will the DOJ learn?”

Coronavirus and its impact on banks, courts, and the prison system could cause the spoofing charges against individuals and investigations of institutions to end. The DOJ looked like it was on the verge of some prosecutorial victories. The virus and its impact on the economy and markets are likely to hand investigators and prosecutors, yet another failure that results in slaps on the wrist.

Meanwhile, silver and gold are precious metals with long histories as a means of exchange. As the flood of unprecedented stimulus continues to stabilize markets, the devaluation of all fiat currencies remains bullish for the prospects of both the yellow metal and its volatile cousin, silver.

The author is long silver