The US economy is in uncharted territory. The BCI signals a recession warning this week. Regardless of this signal, we need to know how the COVID-19 pandemic has, or has not, influenced the calculations. Table 1 lists the economic data that the BCI uses and combines the components for the index in “real time,” i.e. the data is only incorporated into the index at its publication date.

From the above table, it is evident that the full effect of the COVID-19 pandemic on the BCI will only manifest itself after the March and April housing data is published.

Figure 1 plots BCIp, BCI, BCIg and the S&P 500 together with the thresholds (red lines) that need to be crossed to be able to call a recession.The BCI was designed for a timely signal before the beginning of a recession and could be used as a sell signal for ETFs that track the markets, like SPY, IWV, VTI, etc., and switch into Treasury bond ETFs, like IEF, TIP, BND, etc. (see our article).

The six-month smoothed annualized growth rate of the series is a well-established method to extract an indicator from the series. We use this method to obtain BCIg, i.e., the calculated growth rate with 6.0 added to it, which generates, on past performance, an average 11-week leading recession signal when BCIg falls below zero. Further, the index BCI retreats from its cyclical peak prior to a recession in a well-defined manner, allowing the extraction of the alternate indicator BCIp, a measure of the fall from the peak, from which, on average, a 20-week leading recession warning signal is generated when BCIp falls below 25.

Table 1 lists the weeks lead to recession would have provided by the warning signal, when the BCIp and BCIg fell below the respective trigger levels, to the start of the NBER recession.

The historical values can be downloaded from iMarketSignals as an MS Excel sheet. 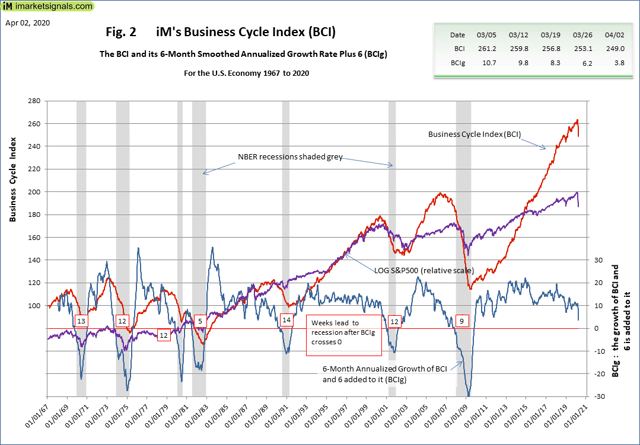 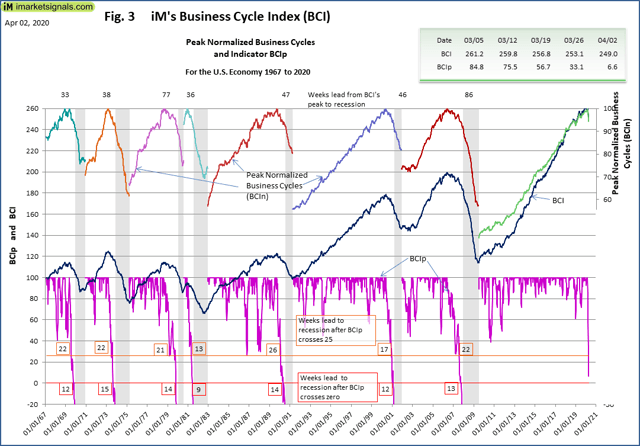 Additional disclosure: Disclaimer: The information provided is based on a mathematical model using public available economic data, and is not biased by any opinions from ourselves or those expressed by others. The charts depict the results of our model and are not influenced by any other factors except the updated parameters which the model uses. You are cautioned that forward-looking statements, which are based on the model’s past performance, are subject to significant geopolitical, business, economic and competitive uncertainties and actual results could be materially different.