As focus has turned to first-quarter earnings announcements, investors are braced for further dividend cuts from S&P 500 Index constituents.

The greatest cuts are expected from within Consumer Discretionary, Energy and Real Estate – the sectors most directly impacted by the economy’s shutdown. Some of these companies now have eye-popping dividend yields.

Below are a few examples of companies that Bank of America identified as having “insecure” dividends in an April 7th report. Schlumberger (SLB) followed through with a 75% cut on April 17.

The anticipation of severe dividend cuts contributed to a rare period of underperformance for high-yielding companies during the first quarter’s market sell-off. Investors typically expect safety from high dividend payers. But only when those dividends are considered safe, of course.

Below, we show quintile performance for S&P 500 constituents, which helps frame which factors were in favor and out of favor during the Q1 sell-off. Based on the relative performance of the first and fifth quintiles, the quality and low volatility (low vol) factors outperformed, while value and yield lagged.

Historically, quality and low vol have tended to outperform during drawdowns. During periods of heightened uncertainty, investors prefer companies with higher profitability and lower volatility.

Value companies tend to struggle as markets price in a recession. These companies’ share prices were lagging before the slowdown, as they were perceived as either distressed businesses in secular decline (bricks-and-mortar retail) or cyclical businesses with earnings at risk in a slowdown (Banks or Energy companies).

Of these four factors, only yield performed contrary to expectations during a sell-off.

The expectation of imminent dividend cuts contributed to the failure of the companies with the highest yields to provide downside protection. Investors believed high yielders were “cheap for a reason” and likely to cut their dividends as a result of the unprecedented shutdown of the economy, proving themselves to be value traps.

By the end of the March, S&P 500 dividend futures anticipated a nearly 30% decline in 2020 dividends. This figure has improved in recent weeks, possibly signaling that some of these high yielders have been oversold.

If we isolate performance during the peak-to-trough decline using factor indexes, we see a picture that is similar to the quintile performance. Although all the factor indexes experienced negative returns, on a relative basis quality outperformed, and value and high dividend underperformed. The low-volatility index outperformed by about 60 basis points (bps) for the quarter but lagged during the sharp sell-off.

The WisdomTree U.S. Quality Dividend Growth index outperformed the S&P 500 by 209 bps and outperformed the High Dividend index by 1,392 bps. Investors favored the steady and consistent cash flows of companies that have the earnings to support paying dividends during a negative shock to the economy.

The payout ratio – dividends as a percent of earnings – is an important metric to track in an environment where earnings are expected to decline significantly.

A lower payout ratio indicates that the dividend is a smaller portion of earnings, so there is a greater cushion for earnings to fall while still allowing the company to maintain its dividend.

In the chart below, the bar furthest to the right shows the payout ratio on a portfolio of the highest 30% of yielders from the S&P 500. The WisdomTree U.S. Quality Dividend Growth Index, which screens for dividend payers with strong trailing profits and excludes those with dividend coverage ratios less than 1, has a payout ratio only modestly higher than the S&P 500. A slightly higher payout ratio for this index is expected with about 19% of the market cap of the S&P 500 not paying any dividend. 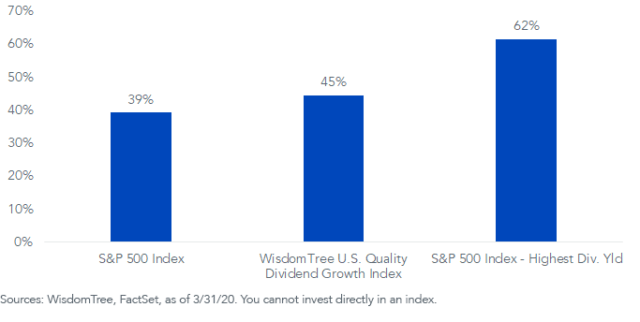 During the market’s latest sell-off, a strategy that sorts for quality dividend payers – those that can maintain their dividend policies when times are tough, but also the capacity to grow them the fastest during a recovery – outperformed strategies targeting high yields.

It seems likely that markets will remain volatile for the near future, perhaps favoring the defensive characteristics that have been exhibited by quality dividend payers.

Contrary to historical patterns, high dividend yielders have failed as a safe haven so far. But the sell-off in high dividend yielders may prove an attractive entry opportunity if dividend cuts are not as dire as previously anticipated. Investors may also begin to snap up the shares of companies offering high dividends in an environment of all-time low Treasury yields.

Matt Wagner joined WisdomTree in May 2017 as a member of the Research team. He is responsible for research on WisdomTree’s products and communicating the firm’s views on the markets. Matt started his career at Morgan Stanley, working as an analyst in Treasury Capital Markets from 2015 to 2017 where he focused on unsecured funding planning, execution and risk management. Matt graduated from Boston College in 2015 with a B.A. in International Studies with a concentration in Economics. Matt is a holder of the Chartered Financial Analyst designation.