The stock, selling at $17 in February, is now only half that.

Utility revenue will be hurt some, given that electricity and gas will be sold because schools, restaurants, offices, and factories are closed (the Tesla plant in Fremont gets most of the attention, but for me, the shutdown of the See’s Candies factory in South San Francisco just before Easter is the greater loss.)

Still, the downturn doesn’t appear to be secular, and one would expect that the stock will come back when the market does.

In PG&E’s case, though, there’s a catch. The worse the stock price, the more today’s shareholders get diluted.

PG&E plans to sell $9 billion in stock when the bankruptcy case concludes, expected by June 30. In addition, fire victims will receive half of their $13.5 billion settlement in stock to be placed in a trust or $6.75 billion. There are also 119 million shares nominally valued at $1.2 billion earmarked for investors led by hedge funds Abrams Capital Management and Knighthead Capital in return for a backstop commitment to buy the new shares if they can’t be sold on the market.

That makes a total of about $16.95 billion in stock to be issued, the precise amount depending on the value of the backstop shares. Seeking Alpha contributor Andrew Williams, who provided input in comments on my last article, suggests additional stock would be issued to settle class-action securities litigation, but I’m not going to try to quantify that.

Fire victims still must vote on their settlement and some of them have expressed considerable restlessness with having to accept stock. Even if they vote No, however, the bankruptcy court could still approve the deal.

The amount of stock to be issued dwarfs the company’s recent market capitalization of $4.76 billion.

Now comes the big question – how much will shareholders be diluted. It depends on the stock price when the new shares are issued.

The original backstop calculation in September assumed that equity would be raised through the backstop at $14.05 a share.

Morningstar says fair value for PG&E shares is $11. At that price, around 1.54 billion shares would be issued. There are 529.3 million shares outstanding, so existing shareholders would get 26%.

However, PG&E stock is well below that figure, at $8.99 as of Tuesday’s close. At that price, dilution would be greater.

There is some language in the March 2 revised equity backstop commitment letter that appears to offer the institutional buyers more shares if the price at the effective date is below $6.42 (119 million shares totaling $764 million).

At a $6.42 price, around 2.64 billion shares would need to be issued, meaning current shareholders would only own 17% of the company – one-third less than under the Morningstar base case. 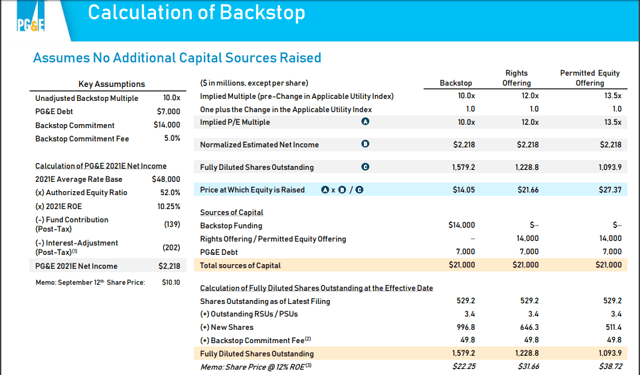 I started a spreadsheet using a range of prices for the equity offering – the original $14.05 estimate, the Morningstar fair value estimate of $11, Tuesday’s closing price of $8.99, and the revised backstop agreement collar price of $6.42.

Using PG&E’s five-year financial projections from their March 25, 2020, disclosure statement, we can estimate 2024 core earnings per share, dividends, and a base-case stock price. I used a P/E multiple of 12, in line with what the company did in the September document.

As you can see, all of the projections show the stock higher than current levels, but the number of shares issued makes a huge difference.

There are some other cautionary factors:

For those who questioned my assertion in the last article that preferred dividends will resume this year if the company gets out of bankruptcy on schedule, here is some additional evidence. The company’s pro forma cash flow statement projects $42 million being paid out in 2020 (three years’ dividends plus arrears) and $14 million each year thereafter. 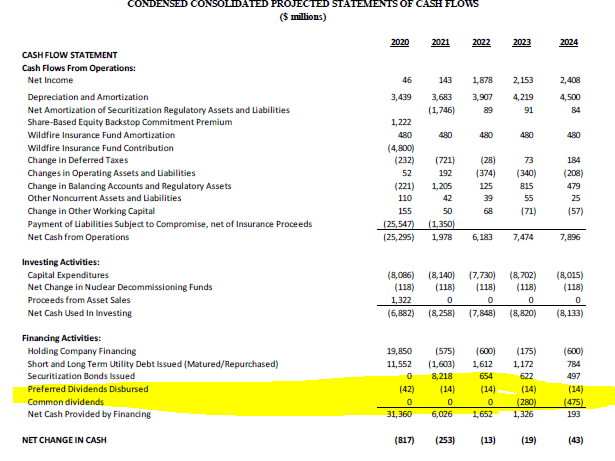 I continue to recommend two non-callable series of preferred shares (PCG.PA, PCG.PB) and remain neutral on the common.

Disclosure: I am/we are long PCG.PB. I wrote this article myself, and it expresses my own opinions. I am not receiving compensation for it (other than from Seeking Alpha). I have no business relationship with any company whose stock is mentioned in this article.