PetroTal (OTCPK:PTALF) is a relatively young company which acquired its first Peruvian assets in 2017 when it purchased several blocks from Gran Tierra Energy (GTE), a company I discussed here as well. In the past three quarters, PetroTal has aggressively expanded its oil production going from an average of 923 barrels per day (not a typo) in Q1 2019 to an exit rate exceeding 13,000 boe/day at the end of the year. The production rate averaged approximately 10,000 barrels per day in Q1 and is working on establishing a credit facility with a borrowing limit based on its most recent 2P Reserves of 47.7 million barrels.

As PetroTal has a more liquid listing in Canada (average daily volume, 950,000 shares) where it’s trading with TAL as its ticker symbol, you should consider the Canadian listing as the company as main trading venue. Additionally, PetroTal also has a listing in London where 1.2M shares are changing hands on a daily basis. In London, PetroTal is listed with PTAL as its ticker symbol. The current market capitalization is around C$141M which almost is exactly US$100M at the current exchange rate. The base currency in this article will be the USD as that’s the currency PetroTal reports its financial results in.

Looking at the 2019 results, Petrotal was on the verge of becoming a cash flow monster before COVID-19 hit the oil sector, but a focus on transportation expenses is needed

PetroTal still needs to publish its full-year financial results, and the 9M 2019 results don’t really provide a good overview of the companies assets, nor about its potential as the average production rate has increased from just over 4,000 boe/day in Q3 2019 to almost 10,000 boe/day in Q1 2020. As such, Q1 2020 will be more relevant to determine the production costs and netbacks.

That being said, PetroTal started to show its potential in Q3 as despite the complete lack of economies of scale, it was able to generate a net profit.

During the quarter, PetroTal generated a total revenue of $18.8M resulting in a pre-tax income of around US$3M which also was the company’s net income. As this was just below half a cent per share, the EPS was posted as US$0.00/share.

While the net operating cost per barrel appears to be reasonable, PetroTal’s main focus should be on keeping its transportation costs as low as possible as those now exceed the pure production expenses:

As the production increases, PetroTal is looking at different options to sell and ship its oil, and it will have more options in 2021 once the Talara refinery will complete the refurbishment and re-open. 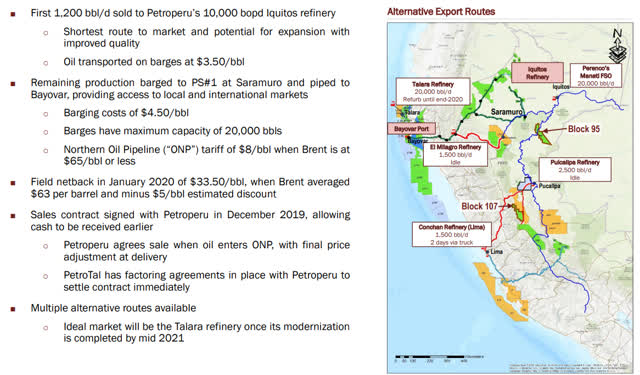 Another reason why I was attracted to PetroTal is its balance sheet. As of the end of September (the full-year 2019 results still have to be filed), the company had approximately US$20.5M in cash and no debt. However, keep in mind there still are other liabilities that aren’t financial debt, so essentially, PetroTal’s market capitalization will be close to its enterprise value. 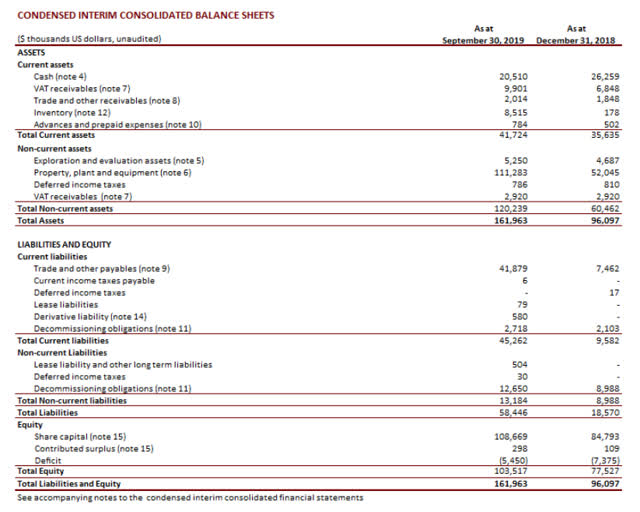 As there have been five strong months for the oil price subsequent to the end of September (Brent averaged around $60/barrel in Q4 2019 and $50/barrel in Q1 2020), this by itself should be sufficient to boost PetroTal’s cash position. But there’s more.

For Q4 2019 there will only be a moderate increase in operating and transportation expenses and as the overhead expenses (G&A) will remain stable, I expect the net income to have more than doubled to US$6M while the current production rates should result in PetroTal performing in a similar way in Q1 2020 despite the oil price plunge in March and the lower average production rate of 10,000 barrels per day. 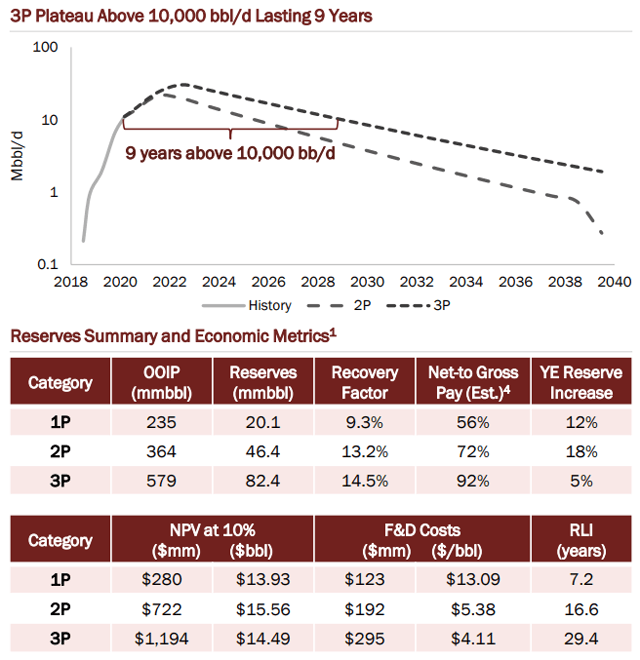 There’s still a lot of uncertainty as although PetroTal tried to reassure the market with its sensitivity table (see below), it will be good to see the actual financial results. PetroTal also promised to become a dividend payer with a 4% dividend yield based on the market cap of the company – a strange dividend policy as I would prefer a dividend to be based on profits and cash flow rather than a market cap. A maiden dividend of C$0.0017 was paid in January, so PetroTal appears to be serious about its dividend commitment. That being said, dividend investors should probably remain realistic for 2020 as keeping the balance sheet healthy should be prioritized over paying a dividend and the suspension of paying dividends as announced on April 21 is a move I support.

I’m waiting for PetroTal’s full-year financial statements which should be filed soon, but I expect the Q4 cash flow and net income to show a substantial boost compared to the Q3 results on the back of an 80% production increase and this will provide us more insight on the operating costs associated with the oil production.

I expect PetroTal to reduce its capex program while focusing on protecting its operating cash flows. PetroTal’s clean balance sheet puts it in an enviable position, but the company still has to prove its resiliency in 2020 and this year will be a huge test case for its management.

I currently don’t have a position in PetroTal but I’m looking to initiate a small and speculative long position as the successful completion of the new wells and the average production rate of almost 10,000 boe/day in Q1 2020 increases my confidence in the company and its team.

Disclosure: I/we have no positions in any stocks mentioned, but may initiate a long position in PTALF over the next 72 hours. I wrote this article myself, and it expresses my own opinions. I am not receiving compensation for it (other than from Seeking Alpha). I have no business relationship with any company whose stock is mentioned in this article.