New Gold (NGD) reported its Q1 2020 financial results. Although the report didn’t present any major positive surprises, it is important to note that several improvements were reached in comparison to the previous quarter. Most importantly, the gold equivalent production increased, despite the suspension of the Rainy River mine in late March.

In Q1, New Gold produced 66,790 toz gold and 18.5 million lb copper, or 103,435 toz of gold equivalent. It means a 2% increase compared to Q4 2019; however, also a 16% decline compared to the same period of the previous year. The quarterly production growth occurred despite the coronavirus-related suspension of the Rainy River mine that started on March 20 and lasted until April 3. The New Afton mine operations were not interrupted.

Although the production volumes increased only slightly quarter over quarter, the AISC declined quite rapidly, from $1,862/toz of gold equivalent in Q4 to $1,446/toz of gold equivalent in Q1. The decline is attributable especially to the decline of sustaining CAPEX (from $89.8 million to $49.1 million). However, despite the decline, the AISC is still well above the levels recorded during 2018 and the first half of 2019. The problem is the notably lower production volume at both mines.

Unfortunately, a big portion of New Gold’s 2020 gold production is hedged (72,000 toz gold in H1 and 96,000 toz gold in H2), which prevents the company from fully reaping the benefits of current strong gold prices. The average realized gold price increased to $1,458/toz and the average realized copper price decreased to $2.56/lb. For comparison, Evolution Mining (OTCPK:CAHPF) that released Q1 results last week reported an average realized gold price of $1,558/toz or $100/toz higher than New Gold. As a result, New Gold’s revenues increased only slightly quarter over quarter, to $142.3 million. Also, the operating cash flow experienced only a small improvement, from $47.9 million to $51.3 million. The net income slipped to negative values and the company recorded a net loss of $28.3 million, which leads to EPS of -$0.04. 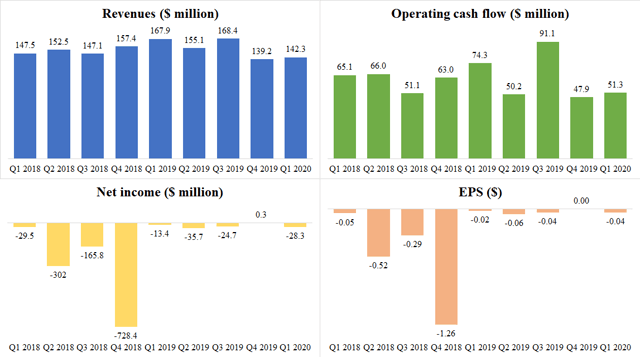 New Gold’s cash position improved significantly, from $83.4 million as of the end of Q4 to $400.4 million as of the end of Q1. This growth is attributable to the sale of a 46% free-cash-flow interest in the New Afton mine for $300 million. Together with approximately $200 million still undrawn from the credit facility, New Gold’s liquidity position is around $600 million, which is quite comfortable. The volume of total debt increased by $32.5 million, to $779.6 million, but due to the huge growth in cash on hand, the net debt decreased by 43%, to $379.2 million. It is by far the lowest level of net debt in more than 2 years.

The chart below shows the development of some of New Gold’s metrics. The operating cash flow-to-net debt ratio has improved notably this quarter, which shows the improved financial health of the company. The price-to-operating cash flow ratio stands at 2.42, as of today. It is a relatively low value compared to New Gold’s peers, when companies like Pretium Resources (PVG) or Eldorado Gold (EGO) that also had to face some serious issues over the recent years have their ratios at 6.8 and 9.7, respectively.

New Gold’s price-to-revenues ratio stands at 0.96. Also this indicator is far lower compared to New Gold’s peers, when Pretium stands at 3.2, and Eldorado stands at 2.6 (both ratios for Pretium and Eldorado are calculated using data for the last four reported quarters, which don’t include Q1 2020). 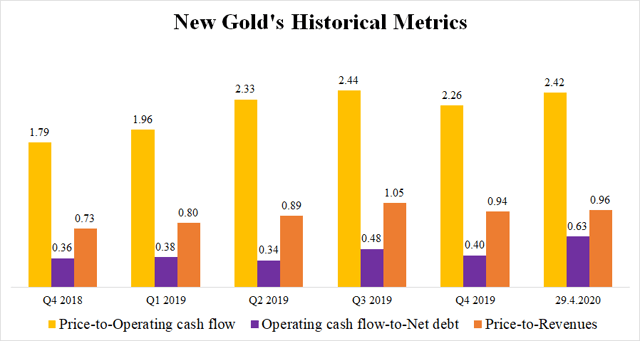 The Rainy River mine suspension affected Q1 and it will be felt also during Q2. As stated in the news release, the mine was restarted on April 3, but by now, it is only at 70% of its pre-suspension productivity. It is possible to expect that the Q2 production volumes will be approximately in line with Q1 (assuming that no new major disruptions occur).

Probably the main event (not counting COVID-19) that occurred in Q1 was the sale of a 46.0% free-cash-flow interest in the New Afton mine to the Ontario Teachers’ Pension Plan for $300 million. In four years, the Pension Plan will have an option to convert the 46% free-cash-flow interest into a 46% joint-venture interest, or it will be able to keep the free-cash-flow interest, but reduced to 42.5%. The good news is that the deal significantly strengthened New Gold’s cash position. The bad news is that it will reduce its future incomes generated by the New Afton mine. However, this will be felt only several years later, as, in the near term, the New Afton free cash flows will be heavily impacted by the capital expenditures related to C-zone development. 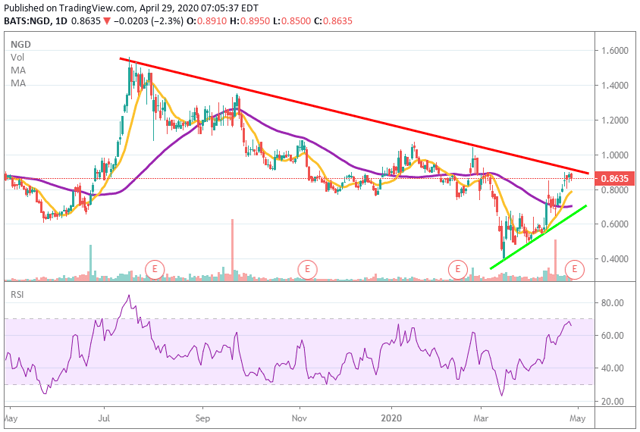 New Gold’s stock chart looks interesting. Although the RSI is close to the overbought levels, it is not quite there yet. The 10-day moving average crossed the 50-day moving average to the upside only several days ago. The share price is above both the moving averages and it is just below a major resistance level. It seems like the share price is about to break out of a long-term triangle pattern in the near future. Although the breakout to the upside looks slightly more probable right now, the gold and stock market development will be the decisive forces setting the direction.

Disclosure: I am/we are long NGD. I wrote this article myself, and it expresses my own opinions. I am not receiving compensation for it (other than from Seeking Alpha). I have no business relationship with any company whose stock is mentioned in this article.