We are all in the gutter, but some of us are looking at the stars.” – Oscar Wilde

The markets have staged a remarkable recovery off COVID-19 meltdown lows here in April. Massive stimulus efforts by the administration and the Federal Reserve, along with some encouraging signs that the coronavirus is starting to be contained globally have ushered in a massive rally in the stock market here in April. 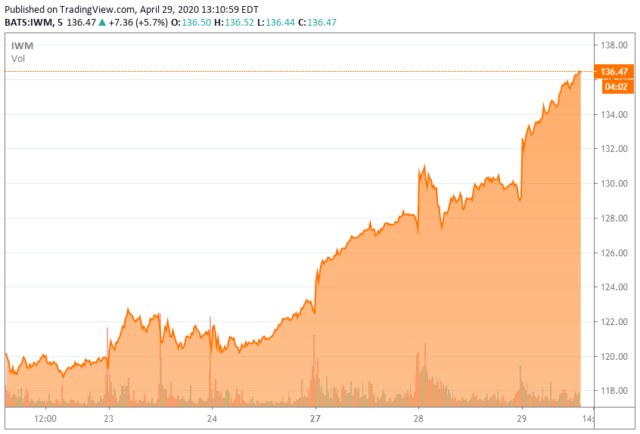 Today we take a look at a name that was added to the model portfolio of the Insiders Forum at the end of March. While the shares have moved up substantially higher since that addition, the stock still has a favorable longer-term risk/reward profile. We update our investment thesis on this biopharma concern – its main beneficial owner continues to purchase it – in the paragraphs below. 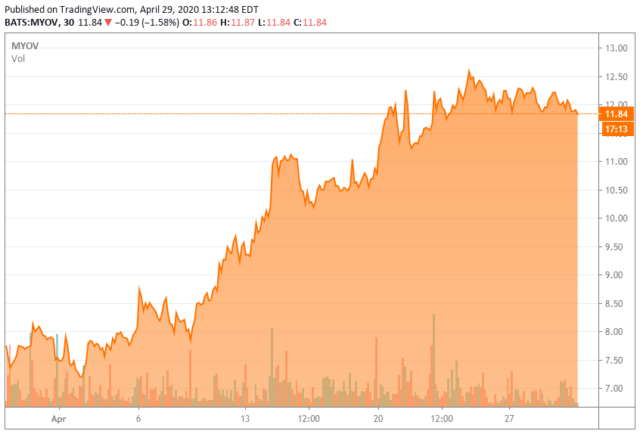 Myovant Sciences (MYOV) is a Bermuda-domiciled, London-headquartered clinical-stage pharmaceutical concern focused on the development of therapies for women’s health and prostate cancer. The company’s operations, which are primarily conducted out of Brisbane, California and Basel, Switzerland, have generated one significant asset, relugolix. Myovant expects to file NDAs for relugolix across two indications in 2Q20 and is anticipating data for a third indication in both 2Q20 and 3Q20. Myovant was formed in 2016 and went public later that same year, raising net proceeds of $200.0 million at $15 per share. Its stock currently trades at approximately $12.00 a share, equating to a market cap of ~$1.1 billion. In December 2019, Sumitovant Biopharma (Sumitomo Dainippon Pharma (OTCPK:DNPUF)) became the company’s majority shareholder, acquiring a 50.2% ownership interest from Roivant Sciences Ltd., which initially spawned Myovant. 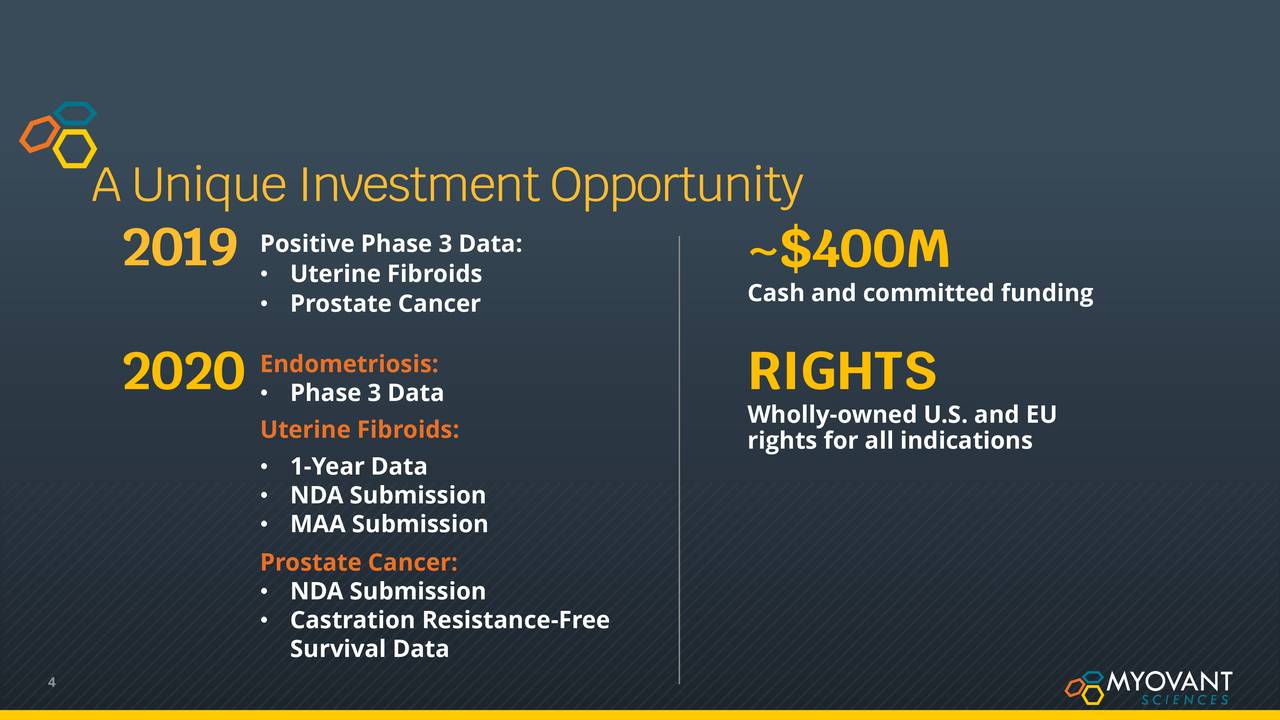 The company’s hopes ride on relugolix, a direct antagonist of gonadotropin-releasing hormone (GnRH) that is already approved in Japan as a monotherapy for the treatment of bleeding due to uterine fibroids. (In exchange for high single-digit royalties, Myovant licensed the commercial rights to relugolix outside of Asia from Takeda Pharmaceutical (TAK) in 2016.) Inhibition of GnRH receptors decreases the release of gonadotropins, and thus the production of estrogen and progesterone by the ovaries and testosterone by the testes. Myovant is developing relugolix as a once-daily combination tablet (with estradiol and norethindrone acetate) for the treatment of heavy menstrual bleeding associated with uterine fibroids and for pain associated with endometriosis. It is also advancing relugolix monotherapy as a treatment for men with androgen-sensitive advanced prostate cancer. 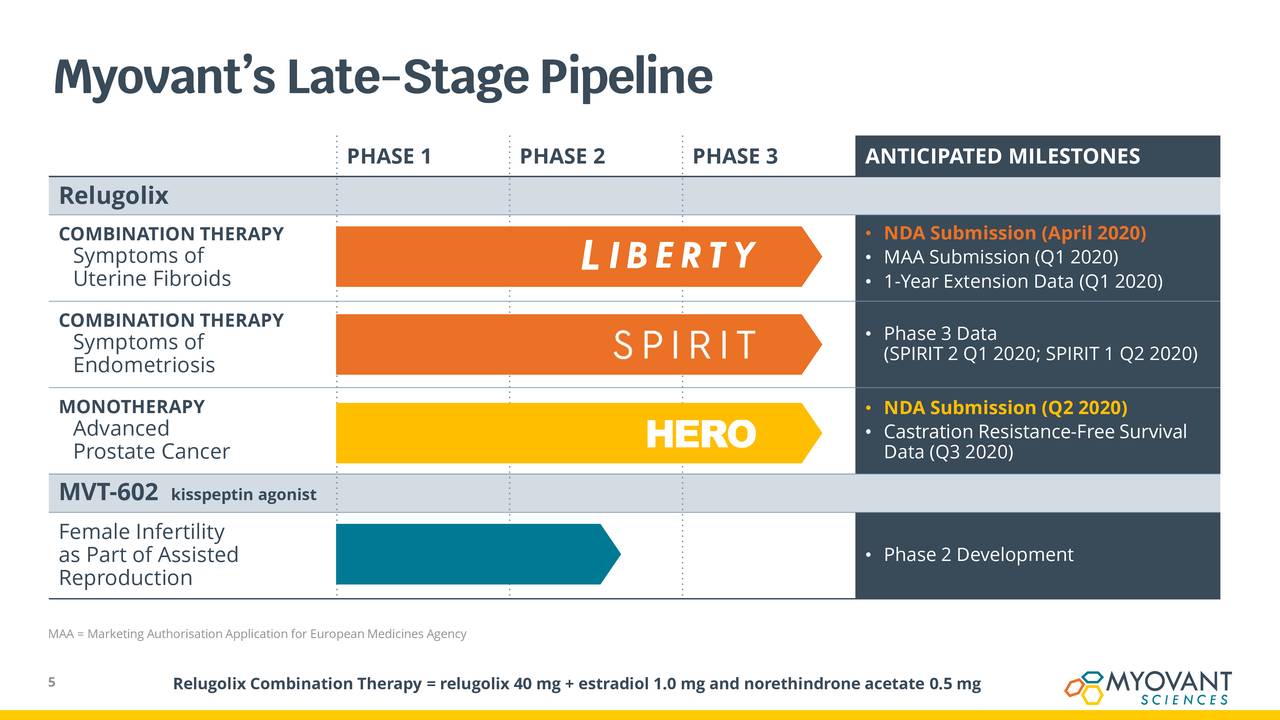 Bleeding Associated with Uterine Fibroids. The company has conducted two Phase 3 trials (LIBERTY 1 and 2) to evaluate relugolix combination tablet in the treatment of bleeding associated with uterine fibroids. In a readout of LIBERTY 1 in May 2019, Myovant’s therapy achieved its primary endpoint with 73.4% of women (n=388) demonstrating blood loss volume of less than 80 mL versus 18.9% receiving placebo (p < 0.0001). On average, an 84.3% reduction in menstrual blood loss from baseline was achieved. The combination therapy maintained bone mineral densities comparable to placebo. These results were essentially repeated in LIBERTY 2, (n=382; 71.2% vs. 14.7% (p< 0.0001); 84.3% reduction from baseline), which was read out in July 2019. Those successes were followed on by an open-label extension study, data from which were released on February 10, 2020, further validating the effectiveness of the combo therapy with an average 89.9% reduction in menstrual blood loss from baseline at one year. 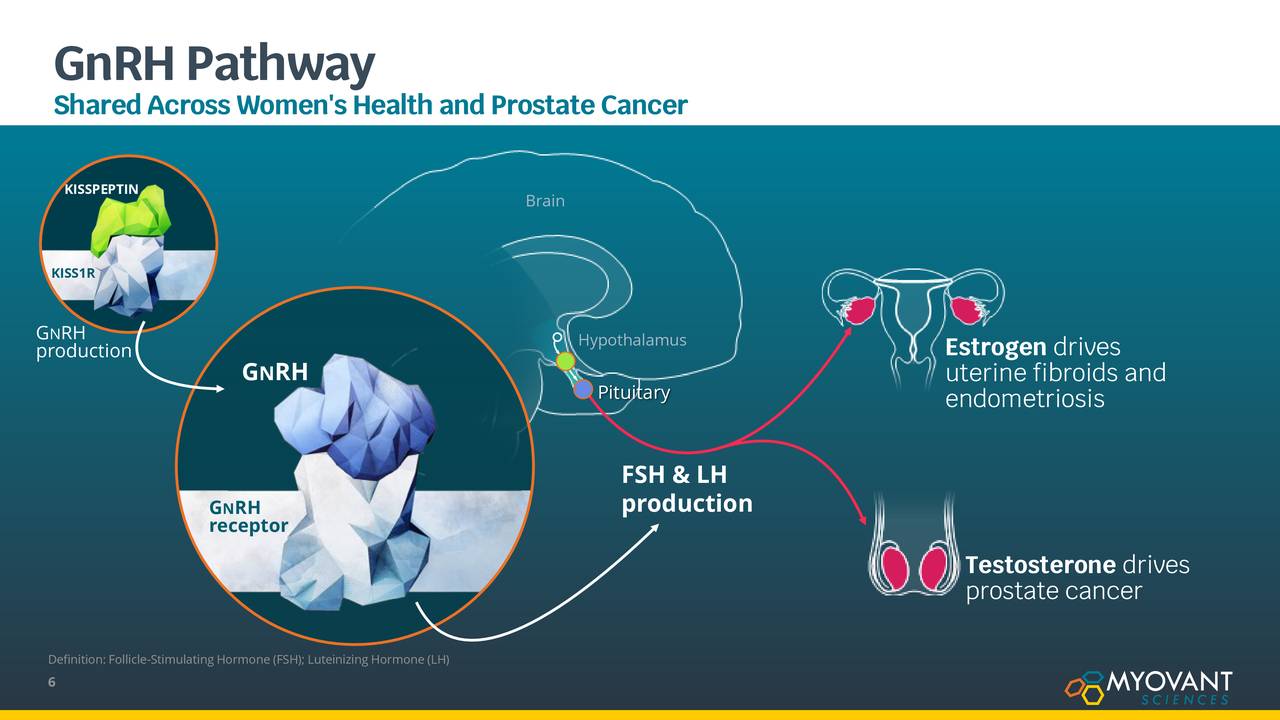 Myovant filed an MAA in Europe for this indication on March 9, 2020, and anticipates filing an NDA soon. If approved by the FDA, relugolix combination therapy would enter a market of ~5 million women who suffer bleeding from uterine fibroids. Although results of the trials were impressive, if approved, it will likely compete with AbbVie’s (ABBV) elagolix, a GnRH receptor antagonist monotherapy, which has already been approved for endometriosis-associated pain. AbbVie filed an NDA for the uterine fibroid bleeding indication in August 2019, giving it first-mover advantage. However, Myovant’s therapy demonstrated fewer hot flashes and night sweats compared to elagolix. It was also superior in bone mineral density loss, although that difference can probably be offset by co-administering hormone therapy with elagolix. 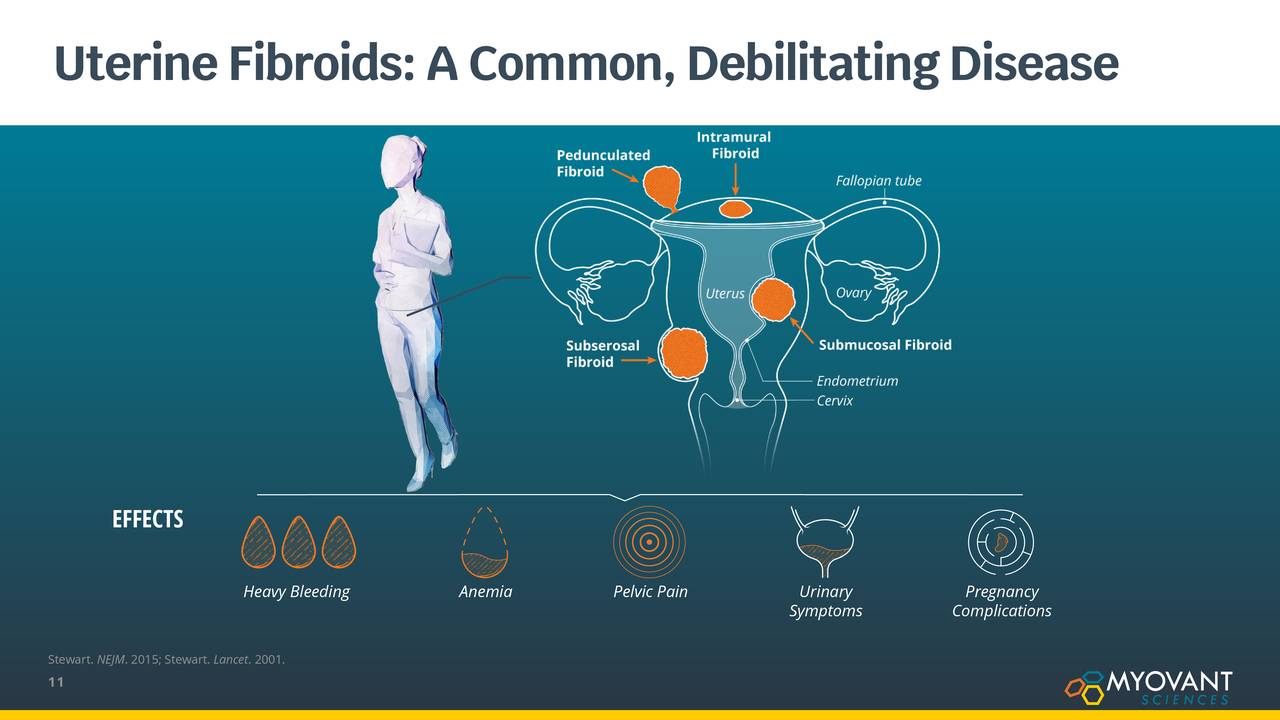 Also on the catch-up front, Myovant entered its relugolix combination therapy into two Phase 3 trials, studying its effectiveness and safety in the treatment of pain associated with endometriosis. The SPIRIT 2 study completed patient recruitment in August 2019 and SPIRIT 1 in October 2019. Positive top-line results from SPIRIT 2 were disclosed on April 22 and are expected imminently and from SPIRIT 1 sometime later this quarter. If successful and eventually approved, Myovant’s treatment would become available to ~6 million American women suffering with symptoms from endometriosis. As with the LIBERTY trials, relugolix is not just striving to meet its co-primary endpoints of reduction in both menstrual and non-menstrual pelvic pain, but to improve upon results already posted by elagolix. 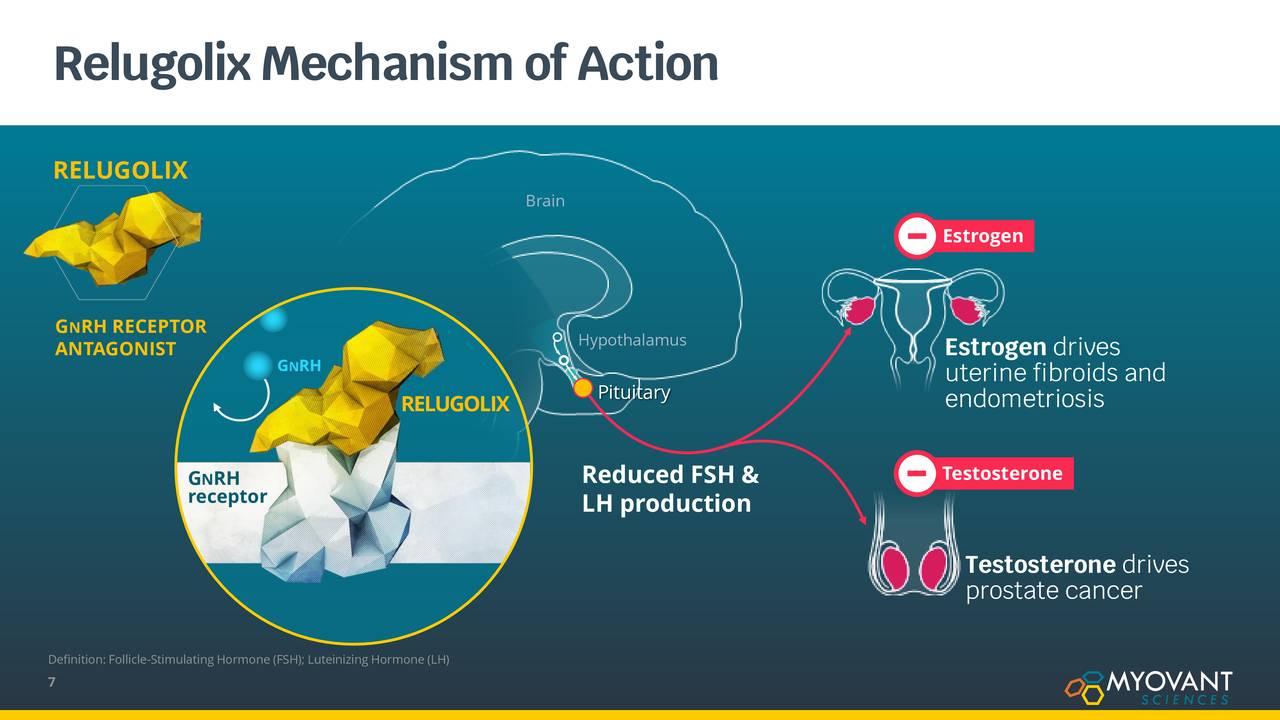 Despite the potential competitive headwinds from elagolix, Myovant was able to sign a licensing deal with Hungarian pharma Richter Gedeon (OTC:RGEDF) for the two female-targeted indications, which was announced on March 31, 2020. In return for ceding the commercial rights to the relugolix combination tablet in Europe, the Commonwealth of Independent States including Russia, Latin America, Australia, and New Zealand, Myovant will collect $40 million upfront and is eligible to receive up to $147.5 million in regulatory and commercial milestones, as well as tiered royalties on net sales following regulatory approval.

Androgen-Sensitive Prostate Cancer. Myovant maintains the commercial rights in the U.S. and to other indications outside of women’s health, including androgen-sensitive prostate cancer, an indication not currently pursued by AbbVie. In a Phase 3 trial ‘HERO’ evaluating relugolix monotherapy in the treatment of 934 advanced prostate cancer patients requiring androgen deprivation therapy (ADT) that was read out on November 19, 2019, Myovant’s candidate displayed substantial promise, meeting its primary endpoint with a 96.7% response rate (i.e., it achieved sustained testosterone suppression to castrate levels) while demonstrating 54% fewer major cardiovascular events versus standard-of-care comparator leuprolide. Also of note: on average, testosterone levels returned to normal in 90 days, substantially faster than leuprolide. On the strength of these results, Myovant filed an NDA for this indication on April 21. 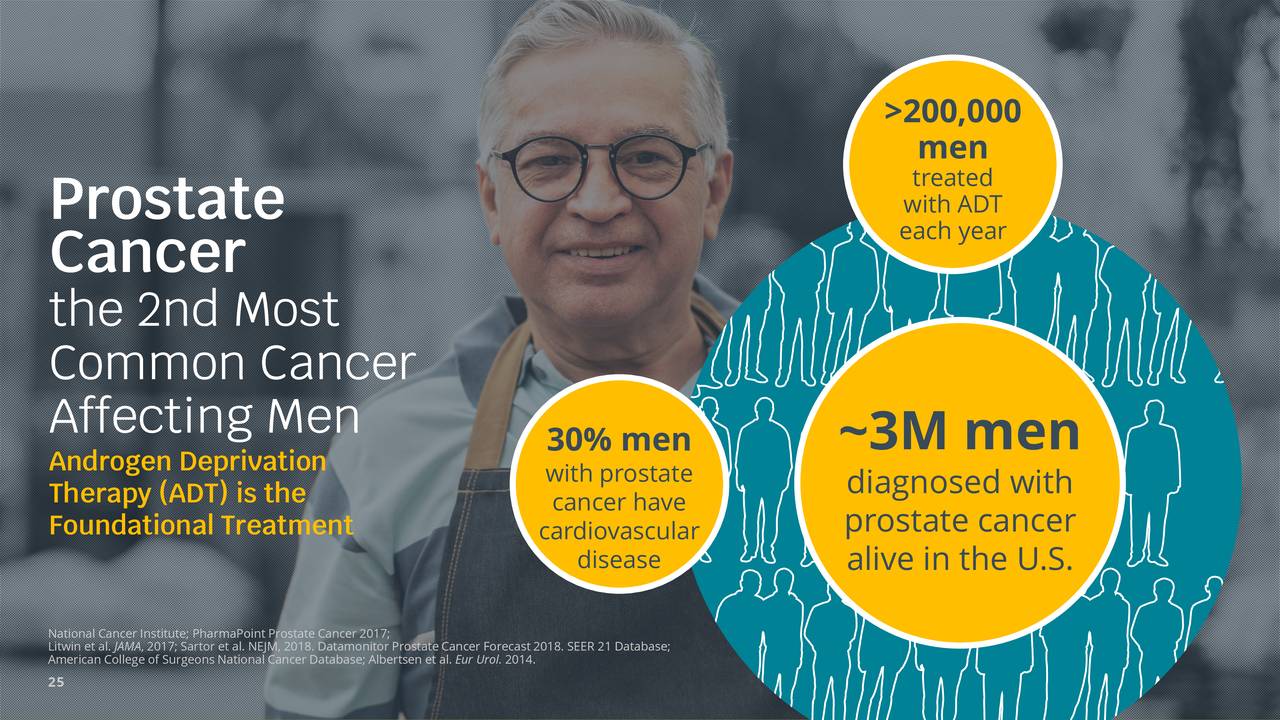 These developments should merit excitement considering prostate cancer is the second most prevalent form of male cancer with ~3.1 million Americans currently afflicted and ~175,000 new cases arising annually. Caught early, prostate cancer is typically treated with surgery or radiation. However, approximately 25% to 30% will progress to advanced prostate cancer. First-line treatment for advance prostate cancer involves ADTs such as HERO trial comparator leuprolide. ADTs are prescribed because they substantially reduce testosterone, which is known to stimulate prostate cancer cell growth. Owing to their mechanism of action, ADTs initially stimulate testosterone production which could lead to an initial worsening of conditions, not to mention adverse events such as the aforementioned cardiac risk. More than 200,000 men are prescribed ADTs annually. These statistics provide relugolix with blockbuster potential. 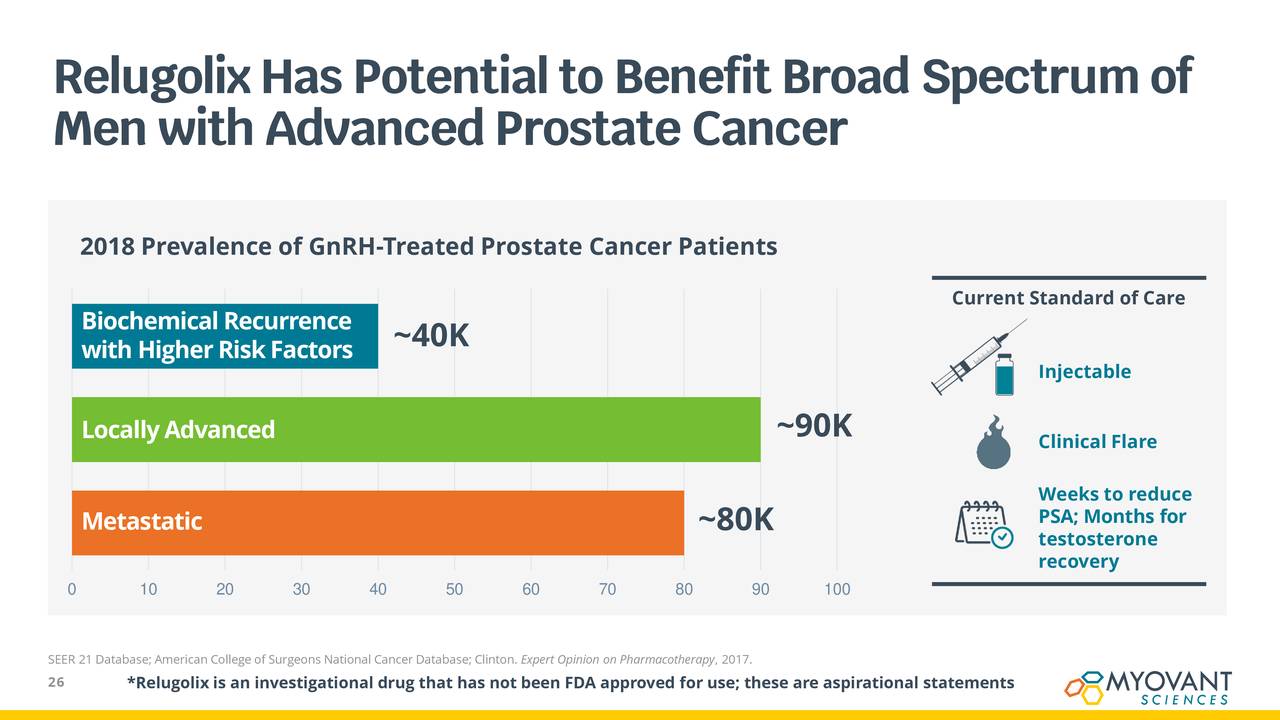 Also, as part of the HERO trial, a total of 434 men with metastatic prostate cancer were enrolled, comprised of 295 from the original study and an additional cohort of 139 men that completed enrollment in July 2019. This group was added so a secondary objective could be added, demonstrating that relugolix can prolong the time to progression to castration-resistant disease, considered its lethal state. Results from this cohort are expected in 3Q20.

Prior to the Gedeon Richter licensing deal, the company exited 2019 with cash and equivalents of $98.9 million. Concurrent to the transaction that made Sumitovant the company’s majority shareholder in late December 2019, Myovant secured from Sumitovant a $400 million loan agreement, from which it initially tapped $113.7 million. It also has ~$10 million available through an ATM facility. Thus, it should have plenty of liquidity for a commercial launch of relugolix in the U.S.

On the heels of clinical successes for two indications, Street analysts are predictably positive on Myovant’s prospects with 3 buys and 4 outperforms versus one hold rating. Their median twelve-month price target is $25, although the range is rather wide, from $15 to $34 a share.

Sumitovant Biopharma used the coronavirus selloff as an opportunity to add to its substantial position, purchasing over 1.2 million shares from mid-March to the beginning of April, all in the $7 neighborhood. Sumitovant continues to add to its stake, adding more than $5 million to its stake since Mid-April even as the stock rebounded off oversold levels.

Thanks to the rebound in sentiment in the market and some positive news flow around the company, the shares are up some 50% since being added to the Insiders Forum model portfolio a month ago. Obviously I liked Myovant Sciences better a month ago when it was priced under $8.00 a share. Options exist on this equity but they are too illiquid to make a covered call strategy viable. That said, even with the recent rally in the stock, the shares are still off approximately 40% from 52-week highs. Slow accumulation on down days in the overall market still seems the prudent way to build a full position in this intriguing name that its major insider continues to purchase.

Even the darkest night will end and the sun will rise.”― Victor Hugo, Les Misérables

Bret Jensen is the Founder of and authors articles for the Biotech Forum, Busted IPO Forum, and Insiders Forum

Author’s note: I present an update on my best small and mid-cap stock ideas that insiders are buying only to subscribers of my exclusive marketplace, The Insiders Forum. Try a free 2-week trial today by clicking on our logo below! 20% off your first year of membership until the end of April.

Disclosure: I am/we are long MYOV. I wrote this article myself, and it expresses my own opinions. I am not receiving compensation for it (other than from Seeking Alpha). I have no business relationship with any company whose stock is mentioned in this article.