Dating was always supposed to be something that happened outdoors, not indoors. But, as the world transitioned into a more digitized and connected place, online dating became an instant hit. In March 2019, Visual Capitalist reported that online dating apps have now become the most common way how couples meet. For Match Group, Inc. (MTCH), things couldn’t have been any better. As the global leader of the industry, the company was firing on all cylinders. And then COVID-19 happened. As the majority of the global population remains indoors, one would naturally assume that the demand for online dating should be surging to record highs. This might be true, but analyzing the impact of this pandemic on Match Group’s prospects can be trickier than what meets the eye. The findings of my research revealed that there’s no reason to be excited about the company’s short-term prospects. However, the long-term outlook remains positive. Even then, shares do not seem to be trading with an acceptable margin of safety to initiate an investment.

Will the lockdown result in a surge in the popularity of dating apps?

People are staying indoors to curb the spread of the virus. This has already resulted in would-be-lovers looking for love online, leading to a surge in demand for Tinder, Plenty of Fish, and other popular dating platforms of Match Group. On March 29, Tinder witnessed over 3 billion swipes, which is the highest-ever recorded in a single day. This is testimony to an increased usage of dating apps on a global scale.

As people are confined indoors, the usage of smartphones has surged. Data for February, which includes the lockdown period in China, is proof of this. 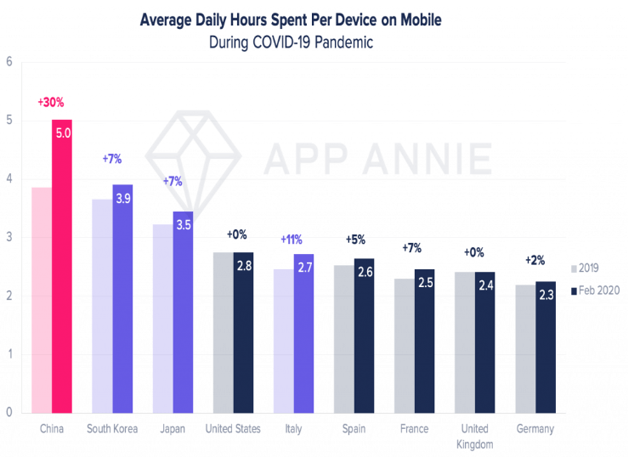 The 30% increase in daily usage of mobile devices in China can be used as a proxy to get an idea of what would follow in the United States in the next few weeks. It would be reasonable to think that some of this increase in smartphone usage will be directed toward dating apps.

This, however, does not guarantee any incremental revenue in the next couple of quarters, for reasons discussed below.

Match Group makes money by charging users for subscriptions and displaying advertisements. There are various subscription options in each dating app offered by the company. Let’s look at the options found on Tinder, the app that accounts for the bulk of the revenue of Match Group (In fiscal 2019, Tinder accounted for 56% of total revenue).

There are two premium plans on Tinder:

Here is a breakdown of what you get with these premium plans.

Some of my readers might be unaware of these features. Let me briefly introduce two of the most-loved features by Tinder users that eventually transform free users to paying subscribers.

Why a user would want to match with someone not even living in his country is beyond my imagination, but many users that I talked to love this Passport feature. Some users in Dubai, where I live, love the idea of matching with an American just to know what they think about the Middle East!

In mid-March, Tinder announced the Passport feature will be offered free-of-charge for all users through April 30, meaning that users now have one less reason to pay for the Tinder Plus subscription. Even though the number of likes is still limited to 100 a day, revenue might be negatively impacted in the coming quarters as a result of offering Passport free of charge.

In a memo sent to users, Match Group CEO Shar Dubey confirmed that there has been an increase in the number of conversations on Tinder and the average length of conversations since the outbreak of COVID-19. Users under 30, in particular, have used the Passport feature to connect with users across the world. However, users above 30 have been not as inclined as their younger peers to sign up for premium products. Shar Dubey wrote:

While we have seen increases in engagement trends among younger users, we are seeing fewer new users joining our products. This impact is most pronounced among users over the age of 30 and varies by region, depending on the level of COVID-19 containment. In markets in Asia where containment has gone well, such as Japan and South Korea, our business has largely remained intact. In markets where containment efforts have been less successful and COVID-19 cases have meaningfully increased, new users signing up and the propensity to pay generally, have declined. In Europe, we’ve seen new subscriber declines of around 5% in aggregate since the crisis began, but in countries severely impacted by COVID-19, like Italy and Spain, we have seen more significant declines.

How is this lockdown leading to a decline in spending on dating services?

When people remain indoors, they order food and grocery items online. The time spent on video streaming platforms also increases. These are pretty straight forward. However, for online dating, things can be very different. Even though we use the term “online dating” to refer to the action of an individual seeking for a partner on the internet, the dating part does not happen online. Rather, individuals get to know each other online but then they meet in person. Online dating grew in popularity because it made the entire process of getting to know a new person much easier.

With this understanding, it’s easy to see why people are reluctant to pay and subscribe to dating apps. There’s no indication as to when things will return to its normalcy, and even after mobility restrictions are lifted, people might remain cautious in how they meet and who they meet. Therefore, a surge in the usage of dating apps might not necessarily lead to revenue growth as would-be-lovers are likely to remain on the free version of these apps. This is exactly what is happening with Match Group, as confirmed by the CEO in her recent memo to users.

There’s another disadvantage for Match Group. None of the apps offered by the company provide video calling facilities. Plenty of Fish recently announced a partnership with The Meet Group (MEET) to roll out a live streaming feature for its users. This is a step forward and will likely deliver desired results in the long term by enabling more interactions among users. However, the unavailability of video calling might push users away from dating apps in the short term.

Takeaway: shares remain expensive and the lack of a near-term catalyst might lead to a decline in the share price

The global lockdown, despite leading to a surge in time spent on its apps, is not good for Match Group. As long as mobility is restricted and public gathering spaces remain closed, many dating app users will not be inclined to pay for premium services. This, in return, will make it difficult for Match to meet its revenue and earnings growth targets. The company executives now expect Q1 results to come in at the low end of the guidance.

Match Group shares have traded at an average earnings multiple of around 32 in the last five years. In comparison, shares are now trading at a price-to-earnings ratio of 37. The increase in the share price in the last couple of years was driven by stellar earnings and favorable industry conditions. Right now, the short- to medium-term outlook is challenging, and the company will most likely report disappointing earnings growth for at least a couple of quarters. Shares might come under pressure as a result, and there seems to be no margin of safety to invest at the current market price. Waiting for a better opportunity seems to be the best choice for now.

If you enjoyed this article and wish to receive updates on my latest research, click “Follow” next to my name at the top of this article.

Disclosure: I am/we are long MTCH. I wrote this article myself, and it expresses my own opinions. I am not receiving compensation for it (other than from Seeking Alpha). I have no business relationship with any company whose stock is mentioned in this article.